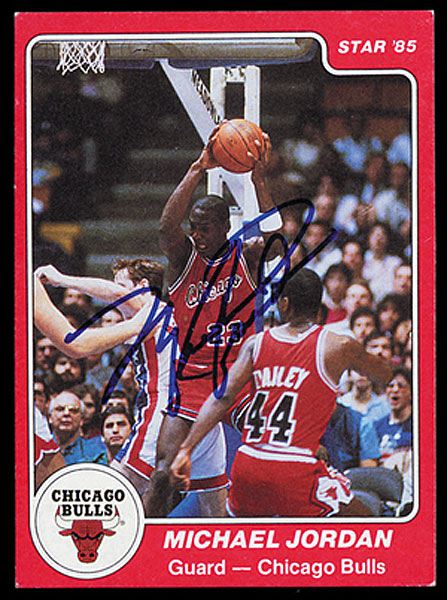 Rare signed example of Michael Jordan's 1984/1985 Star rookie card (#101), Jordan's earliest card issue. Predating Jordan's Fleer rookie card by two years, this card actually dates from his first season with the Bulls and is among the most desirable of all basketball cards. (Note: there are many reprints of the 1984/85 Star Company Jordan rookie cards. This example, of course, is an original.) Jordan has beautifully signed the card in blue fine-point marker (grading "10") on the front, with the signature contrasting exceptionally well against the multicolored background. This is the first signed example of this classic we have ever offered. In Excellent condition. From the Jimmy Rubino Collection. LOA from James Spence/JSA. Reserve $500. Estimate $1,000+. SOLD FOR $2,644