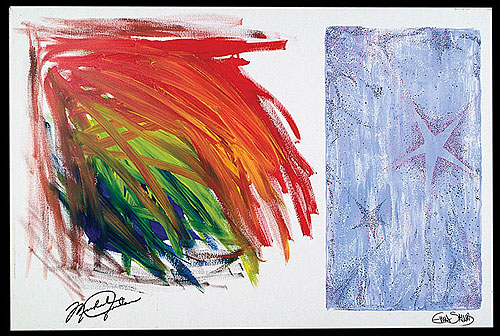 Of all the Michael Jordan signed items in James Rubino's vast collection, the offered artwork is perhaps the most unique. This abstract oil painting by Michael Jordan, which shares its canvas with a more conventional painting by actress Emma Samms, was created for charity and originally sold at a fundraising benefit for the Starlight Children's Foundation in Chicago sometime during the mid 1980s. Both Jordan and Samms have signed their respective works along the base, with both signatures grading a perfect "10." We are not aware of, nor have we ever seen, another Michael Jordan original artwork, making this one of the most unusual Jordan signed pieces ever offered at auction. Accompanied by a letter from the original purchaser of the painting in which he details its history. Oil on canvas. 36 x 24 inches. LOA from James Spence/JSA. Reserve $200. Estimate $500/$1,000. SOLD FOR $823