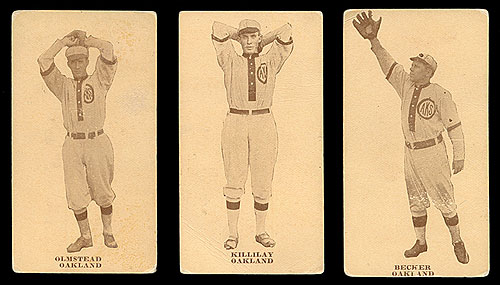 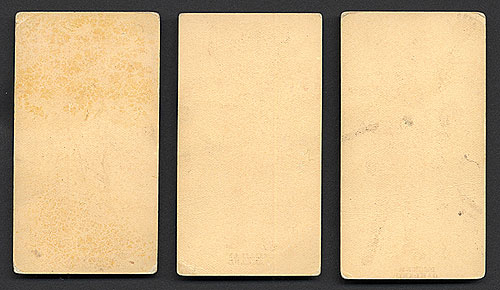 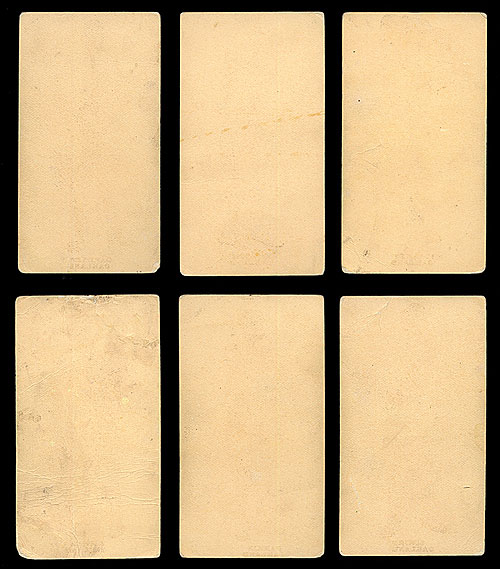 Collection of nine cards, each measuring 2 x 3-5/8 inches, featuring full-length player poses, on a sepia-toned background, of players of the Oakland Oaks from the Pacific Coast League. This is the first group of this rare issue that we can recall ever offering. The manufacturer of this 20-card set (as checklisted in The Standard Catalog ) is unknown. Although no manufacturer is noted on the card, Mark Macrae, who in our eyes is the single most knowledgeable of all PCL card experts, makes an extremely compelling case that the set was in fact issued by the Cardinet Candy Company of Oakland, one of the largest candy companies in Oakland at the time. Among the many points noted to support this theory are these: 1) The players featured are all from Oakland. 2) Samples from this series are usually found in period collections of Obaks and Zeenuts (as was the case with this collection) and in East Bay estates. 3) Cardinetâ€™s advertisements for â€œBaffle Barâ€ are found along the outfield walls at Emeryville Ballpark (as well as at other West Coast ballparks of the era). 4) Cardinet marketed a candy bar called â€œTexas Tommyâ€ which featured cards of major league ballplayers in 1914, confirming that Cardinet had an interest in marketing baseball. 5) A piece of printerâ€™s scrap is known to exist (a printer's scrap "Rosetta Stone") that is also supportive of this theory: On one side of the printer's scrap is a final version of Leard from this Oakland Oaks Team Issue set. On the reverse is an unknown major leaguer in the style of a Texas Tommy card. This is a very attractive collection of these PCL rarities, consisting of nine of the twenty players listed in the Standard Catalog of Baseball Cards : Becker (Vg), Gardner (Gd), Gregory (Gd), Killilay (Gd), Malarkey (Gd), Olmstead (Gd), Parkin (Gd), Schirm (Gd), Zacher (Pr-Fr). Each has a stronger appearance than its technical grade. Total: 9 cards. Reserve $500. Estimate $1,000/$2,000+.