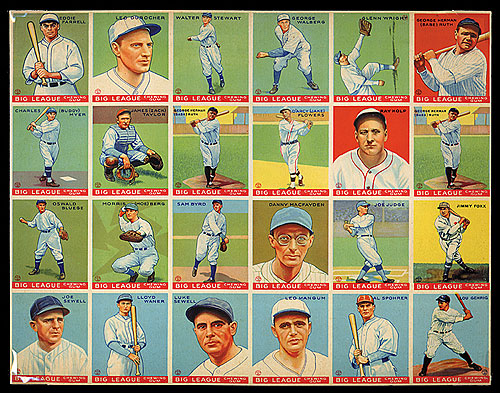 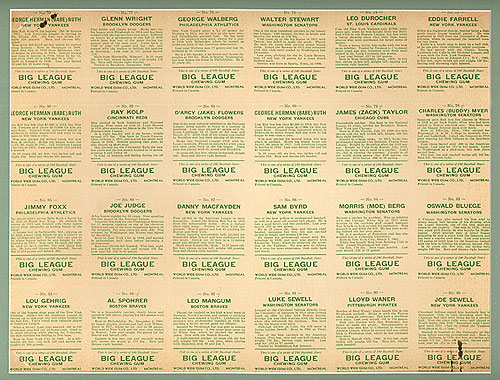 Outstanding 1933 Goudey "Triple Ruth Sheet" example with rare provenance tracing directly to the family of the printer for Goudey. This uncut 1933 Goudey sheet (Canadian) includes three Babe Ruth cards as well as Lou Gehrig, and has an enormous significance on many counts. In addition to being an extremely rare Goudey sheet (one of only five examples known) and including three 1933 Goudey (Canadian) Babe Ruth cards (as well as Lou Gehrig), this sheet explains the story of how the 1933 Goudey set was printed and the mystery of the rarity of the famous 1933 Goudey #106 Lajoie.

Complete and extremely rare 24-card production sheet of 1933 V353 World Wide Gum (Canadian Goudey) "Big League" Chewing Gum cards (featuring the twenty-four cards numbered from #73 to #94, and #55), highlighted by three Babe Ruth cards (both Ruth cards in the V353 set, plus an additional #80 Ruth, which appears on the sheet twice) and Lou Gehrig (#55). The backs of the cards of this sheet are of the Canadian World Wide Gum variety. These backs are virtually identical to the backs of the American series with the primary difference being that the cards are numbered differently. The fronts are indistinguishable from their American counterparts. In addition to three Babe Ruths and Lou Gehrig, this sheet also includes an additional four Hall of Famers: #74 Leo Durocher, 85 Jimmy Foxx, 89 Joe Sewell, and 90 Lloyd Waner. Any uncut 1933 Goudey sheet would be a highlight in even the most advanced collection, but a sheet with three Babe Ruth cards (in addition to Lou Gehrig and Jimmy Foxx) has a universal appeal, and can be easily appreciated as a museum-caliber display piece by any card collector or noncollector. Fewer than one hundred Goudey sheets from all baseball series are known to exist and only a small number of these include even one Babe Ruth. This sheet is especially significant in that the duplication of the full-length batting-pose card of Babe Ruth on the sheet is directly related to the great rarity of the famous #106 Lajoie in the 1933 Goudey set. The 1933 Goudey set of 240 cards was printed on ten 24-card sheets. The #106 Lajoie, of course, was left out of the 1933 printing. The #106 Lajoie card was not actually printed until 1934 when Goudey specially designed and printed the card to satisfy the demand of those loyal customers who wrote to complain that they could not complete their sets. Those who wrote received a Lajoie card directly from Goudey by mail. If the 1933 Goudey set was printed on ten sheets of 24 cards and there was no #106 Lajoie in this printing, then one card must have been double-printed. It was! This sheet shows that one card - the full-length batting pose card of Ruth - was in fact double-printed.

The 1933 Goudey set is the first of all modern gum-card issues and the most important of all Goudey issues. Uncut sheets of Goudey cards are extremely rare and among the most popular and sought-after of all baseball-card sheets. This sheet and the 1934 Goudey sheet with #106 Lajoie are without question the most important and most desirable sheets in the entire world of card collecting. The offered sheet originates directly from the family that did the printing for the Goudey. This pristine example is extremely bright and crisp, with perfect colors and square corners, and an overall Ex-Mt appearance. A minor rust residue can be found on the reverse of the upper right-hand card (Ruth) and the lower left-hand card (Sewell) from at one time being stored in a large album with two paper clips. This is mentioned only for the sake of accuracy and does not in the least affect the virtually flawless appearance of the sheet. It is particularly fortunate that this sheet was stored in this manner as opposed to being taped along the sides, which is how so many other Goudey file sheets were originally stored. There are a few stray pencil marks, which can barely be seen, on the backs of seven of the sheet's common cards. This sheet has been offered at public auction only twice before, in 2004 at Mastro, where it realized $37,740. It has been consigned to this auction directly from the purchaser at the 2004 auction. Previous to that sale, in 1997, the sheet was consigned directly by the family of the printer for Goudey and sold in REAâ€™s auction for $20,372. While the extremely high value of the cards that are included on the sheet may have limited bearing on exactly how collectors value the sheet, it is hard not to appreciate that a PSA 10 Ruth is a six-figure card, and the interior card of Ruth on this sheet is essentially an absolutely perfect, flawless example, and possibly the very best in the world (though perhaps, ironically, not currently valued in the same manner as a Mint card simply because it is in the center of an uncut sheet). Whether this sheet sells for more or less than previous sales is for the market to decide. While value is subjective, it is undisputed that this is one of the greatest of all uncut Goudey sheets, one of the finest "Triple Ruth" sheets in existence, and one of the great treasures in the entire world of card collecting. Very professionally matted and double-side framed, so the reverse can easily be viewed if desired, to total dimensions of 21.5 x 18.5 inches. Reserve $10,000. Estimate (open). SOLD FOR $32,313