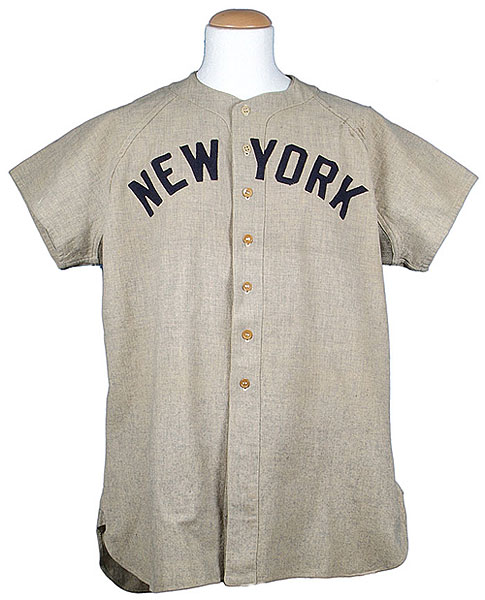 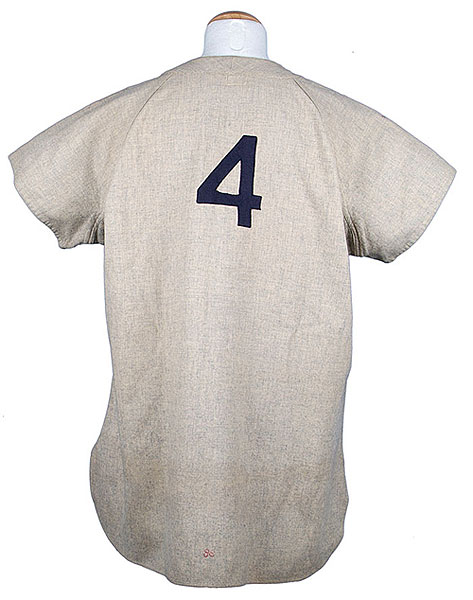 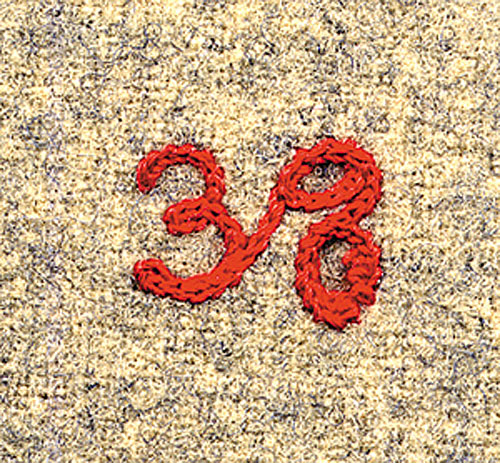 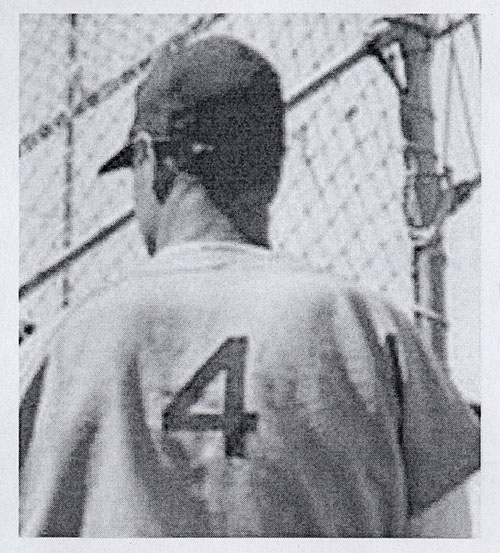 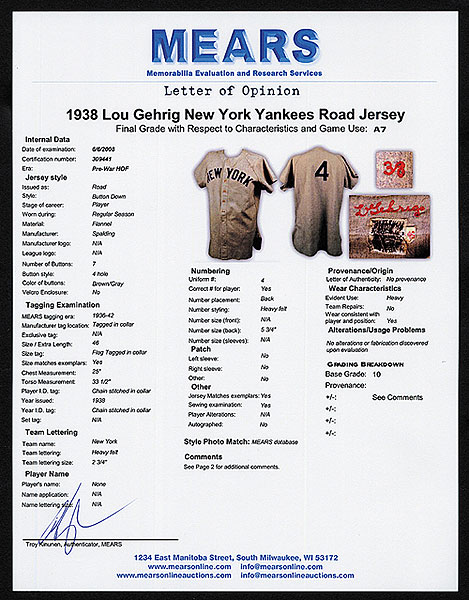 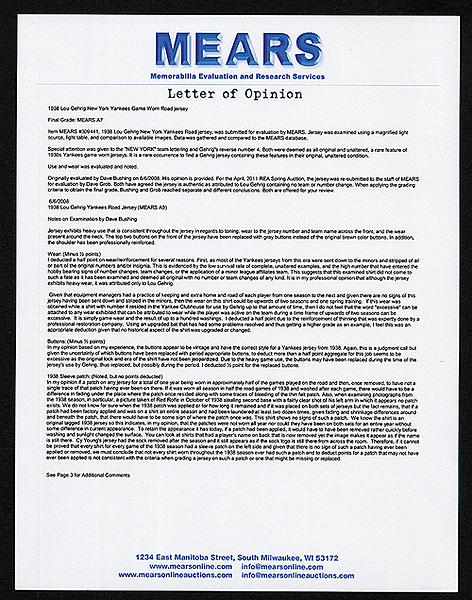 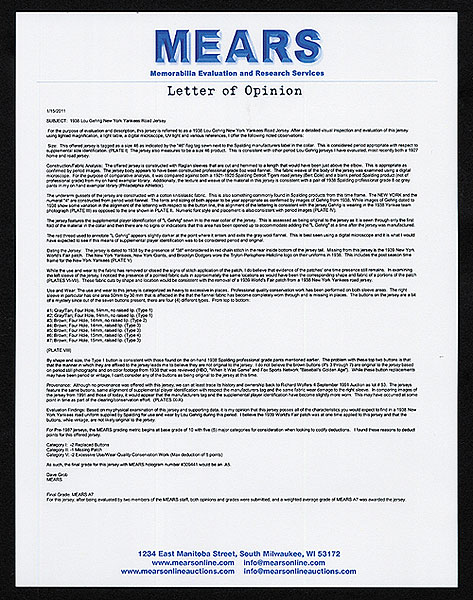 For a complete description of the 1938 Lou Gehrig New York Yankees Game-Used Road Jersey (and link to auction description addendum) please go to: http://www.robertedwardauctions.com/auction/2011_preview/3.html In addition to the auction description addendum, please be sure to visit this illustrated REA blog post entitled "1938 REA Lou Gehrig Jersey: Perfect Photo Match? We think so. YOU decide!" at the following link: http://blog.robertedwardauctions.com/?p=437

The following is a slightly edited (shortened) version. Monumentally significant New York Yankees game-used road jersey worn by Hall of Fame first baseman and Yankees team captain Lou Gehrig in 1938, his last full season in baseball. Few baseball jerseys are as worthy of display as national treasures at Yankee Stadium, The National Baseball Hall of Fame, or the Smithsonian, as is this 1938 Lou Gehrig New York Yankees game-used road jersey. While the word â€œrareâ€ might be the most overused and liberally interpreted term in the hobby, it might actually be an understatement in regard to a Lou Gehrig game-used jersey. To the best of our knowledge, as few as five authentic Lou Gehrig jerseys are in existence. Only four, including the offered example, are currently listed in the MEARS census. We know of just two others, one of which resides in the permanent collection of the Baseball Hall of Fame. The offered example is particularly remarkable and noteworthy for many reasons, including its year of issue and the fact that both the front and reverse lettering are completely original.

When Gehrig received this jersey at the start of the 1938 season no one could have imagined that it was to be his final full season in pinstripes, especially given his previous year's totals. The fabled "Iron Horse" batted .351 with 37 home runs and 159 RBI in 1937, numbers that helped power the Yankees to their second consecutive World Championship. Although Gehrig was just two months shy of his thirty-fifth birthday at the start of the 1938 campaign, few had any concerns regarding the health of a man who had just played in 1,965 consecutive games and showed no signs of being ready for retirement. Perhaps it was that optimism, the belief that Gehrig would never slow down, that made his subsequent illness all the more painful to bear. Gehrig's 1938 batting totals, on paper, looked fine: 29 home runs, 114 RBI, and a .295 batting average. They were, however, the lowest numbers Gehrig had posted in each of those categories in over a decade, and those close to him knew something was wrong. On May 31st, Gehrig made baseball history by playing in his 2,000th consecutive game, against the Red Sox at Yankee Stadium. The glory of that achievement; however, could not overshadow what appeared to be a steep decline in his overall play. As the season progressed his strength seemed to be waning, and a gallbladder problem, which resulted in his doctors restricting his diet, seemed to make matters worse. During a golf outing that year, pitcher Wes Ferrell became concerned when he noticed that Gehrig was wearing tennis sneakers instead of golf shoes, and was sliding his feet along the ground to walk. By the end of the season it was apparent to everyone that Gehrig's skills were significantly diminished, so much so that a few reporters even had the temerity to ask manager Joe McCarthy if he were considering taking Gehrig out of the lineup. McCarthy answered them tersely by replying, "It's Lou's decision." In the spring of 1939, Gehrig's condition severely worsened. His coordination was so bad that teammates privately expressed fear for his safety on the field. Still, McCarthy was adamant in letting Gehrig make the call. After struggling mightily for the first eight games of the 1939 season, Gehrig finally took himself out of the lineup on May 2nd at Detroit. He would never play in another game. Seven weeks later Gehrig received the official word on his condition from the doctors at the Mayo Clinic: amyotrophic lateral sclerosis, a terminal disease for which there was no cure. Gehrig passed away just two years later at the age of 38.

The gray flannel road jersey is lettered â€œNew Yorkâ€ across the front and features the number â€œ4â€ on the reverse. All letters and numerals are appliquÃ©d in navy-blue felt. The name â€œL. Gehrigâ€ is chain-stitched in red in the collar. Located directly below Gehrigâ€™s name is both a vintage â€œSpaldingâ€ label and an adjacent â€œ46â€ size tag. The year, â€œ38,â€ is chain-stitched in red on the left front tail. One of the factors that is most significant regarding this jersey is the fact that all of the lettering and tagging is completely original. Many Yankees jerseys from this era, including some of the known Gehrig examples, display either a restored team name on the front and/or a restored number on the reverse. That is not the case with the offered garment. Both the front lettering and Gehrigâ€™s number on the reverse, as well as Gehrigâ€™s name in the collar, are original as issued, making this an exemplary jersey in that regard. As duly noted in the MEARS report, the jersey does have some minor professional conservation work on both sleeve areas for reinforcement due to the excessive amount of use and wear. This was performed for ideal preservation and for such a museum-quality garment this is a very accepted and positive practice that will ensure both its ideal conservation and display value for future generations.

The fact that this jersey displays a tremendous amount of wear itself is a positive attribute and is not surprising, since Gehrig played in every single game that season. In the MEARS report, authenticators Dave Bushing and Dave Grob had different interpretations of two qualities of the jersey: 1) It is possible (though not certain) that the buttons are vintage replacements, and 2) it is possible that a 1939 New York Worldâ€™s Fair patch once appeared on the left sleeve. This is a remarkable game-worn Lou Gehrig jersey of incredible historical significance, dating from his final full season, and very possibly his last World Series ever. Graded A7 by MEARS. The full MEARS LOA, which includes independent reports by both Dave Bushing and Dave Grob, is posted on our website. LOA from Troy Kinunen/MEARS. Reserve $50,000. Estimate $100,000+. SOLD FOR $329,000