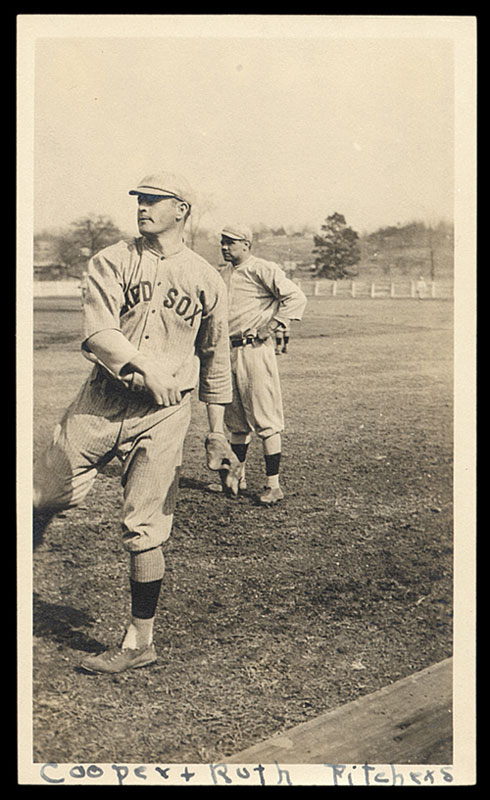 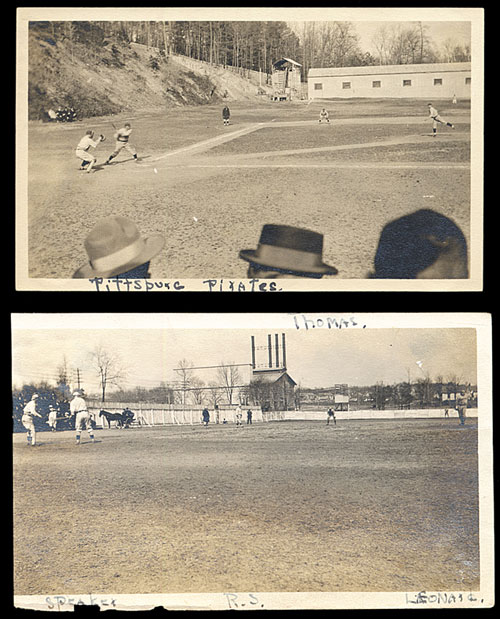 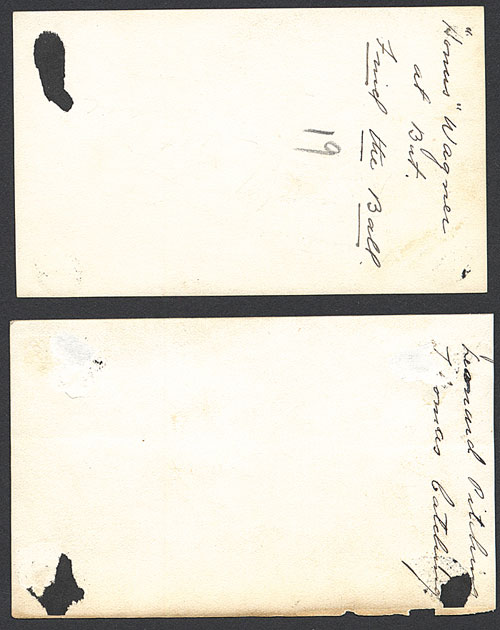 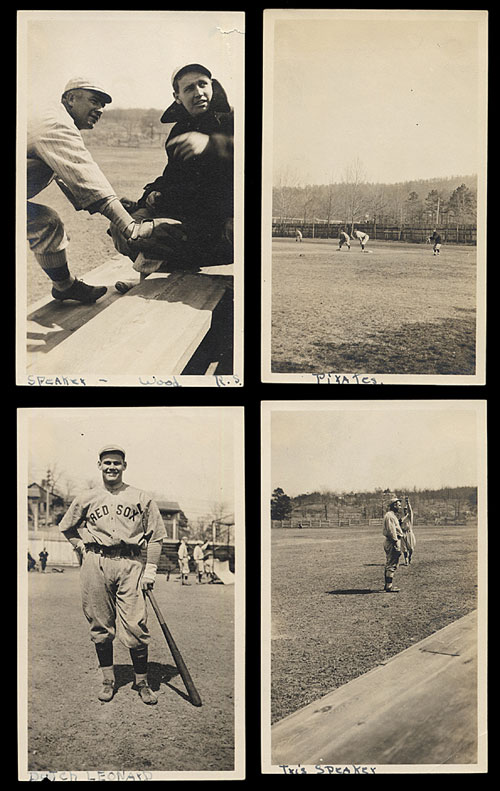 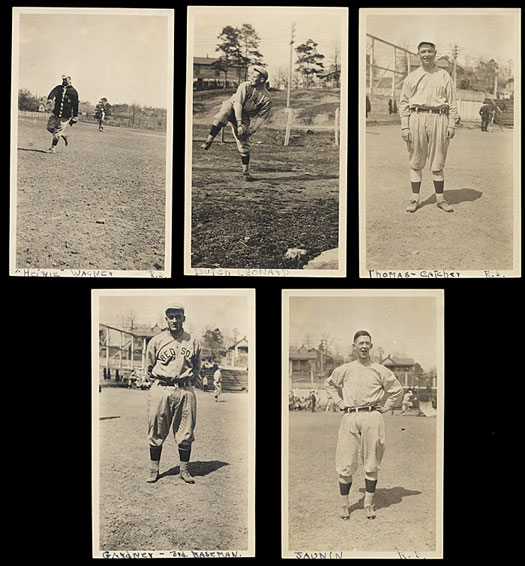 Presented here is an amazing newly discovered photo collection featuring thirteen images taken in 1915 during spring training at Hot Springs, Arkansas. While both Honus Wagner and Tris Speaker are pictured here (each at bat in a game, no less!), it is the one single photo capturing a young, rookie left-handed pitcher by the name of George "Babe" Ruth that truly distinguishes this group. The historical significance of that Ruth photo becomes apparent when one realizes that it represents one of the earliest images in existence of Babe Ruth as a member of the Boston Red Sox. This group of photos should not be confused with a similar collection of 1915 Boston Red Sox spring-training photos offered elsewhere in this auction. That other collection, which originates from the family of Red Sox owner Joseph Lanin, and is equal in its significance, has no connection to this group. The photos here are entirely new to the hobby and originate from a family of noncollectors. According to our consignor, these photos have been in his family since 1915 and were originally taken by a relative on his mother's side. The relatives were quite wealthy and traveled often. As fate would have it, they just happened to visit Hot Springs, Arkansas, in the spring of 1915, where both the Red Sox and Pirates were training. That visit is recorded for all posterity by the thirteen original snapshot photos (each 2.5 x 4.25 inches) offered here. (It should be noted that these thirteen photos were found among literally hundreds of travel photos taken by the relatives during their many trips, all of which were saved and passed down to various family members.)

Babe Ruth was purchased by the Red Sox on July 9, 1914; however, he only appeared in four games for the club before being sent down (on August 5th) to the minors for more seasoning. He did not rejoin the Red Sox until spring training of 1915. To the best of our knowledge there are no known photographs picturing Ruth as a member of the Red Sox during his one-month stay with the club in 1914. Thus, this original photograph represents the first glimpse of Ruth in a Red Sox uniform and duly chronicles the start of what would become the greatest career in baseball history. The focus of the offered Ruth photo is actually pitcher Guy Cooper, who is seen warming up before the game. However, Ruth is standing beside him and is clearly recognizable, even at such a young age. As with all of the photos in this collection, a vintage ink caption appears along the base and on the reverse. The notations on the Ruth photo read "Cooper + Ruth Pitchers" along the base in blue ink and "Cooper + Ruth 'Red Sox' 'Pitchers'" in black ink on the reverse. We should mention that we are fairly confident that Ruth can be seen in a second photo picturing manager Bill Carrigan instructing nine of his pitchers. However, the player we believe to be Ruth is in the far back with both his body and face almost completely hidden from view by a player standing directly in front of him. Each photo is in Near Mint condition.

Both the Boston Red Sox and Pittsburgh Pirates regularly trained in Hot Springs, Arkansas, during the early 1900s. Included in this collection are two photos capturing the action from an exhibition game between the clubs, a scene from a Red Sox intrasquad game, and general photos of Red Sox players during practice. All of the players are pictured in uniform on the field. Unless otherwise noted, all of the photos are in Near Mint condition. The remaining ten photos are comprised of the following: 1 ) Honus Wagner at bat during an exhibition game. 2) Honus Wagner as a base runner, leading off of first; manager Fred Clarke is the first-base coach. 3) Tris Speaker at bat during a Red Sox intrasquad game; slightly trimmed along the left border and a few minor edge tears along the base. 4) Tris Speaker and Joe Wood pictured together talking on the bleachers; small tear in the upper right corner. 5) Tris Speaker standing alone on the field; small, light crease in the lower right corner. 6) Pitcher Dutch Leonard warming up on the sidelines. 7) Pitcher Dutch Leonard posing while holding a bat; tiny edge tear at the base. 8) Infielder Heinie Wagner warming up on the side lines. 9) First baseman Larry Gardner posing for the camera. 10) Catcher Pinch Thomas posing for the camera. 11) Infielder Hal Janvrin posing for the camera. It should be noted that although none of the photos are dated, the original group they were found with were all from 1915. Even without that information, the fact that Guy Cooper is pictured here dates the photos to precisely 1915. Cooper only played with the Red Sox in 1914 and 1915, and Ruth could not have been at spring training with the Red Sox in 1914. This is a truly remarkable series of unique photographs, never before seen by the collecting community, chronicling Ruth's earliest days as full-time member of the Boston Red Sox. Total: 13 photos. Reserve $1,000. Estimate (open). SOLD FOR $2,963