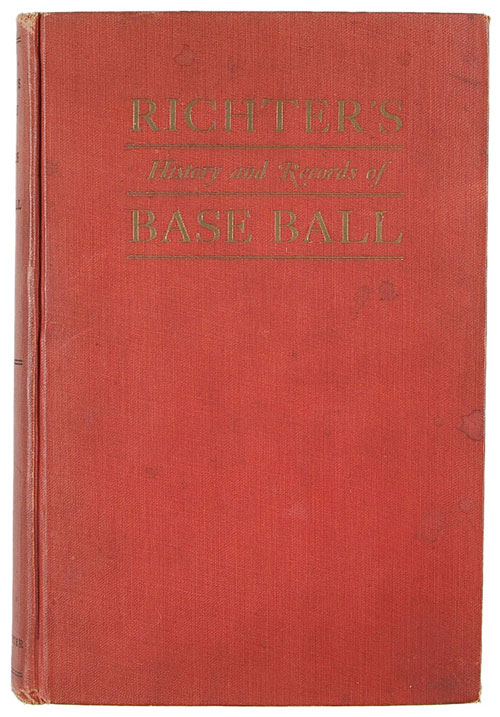 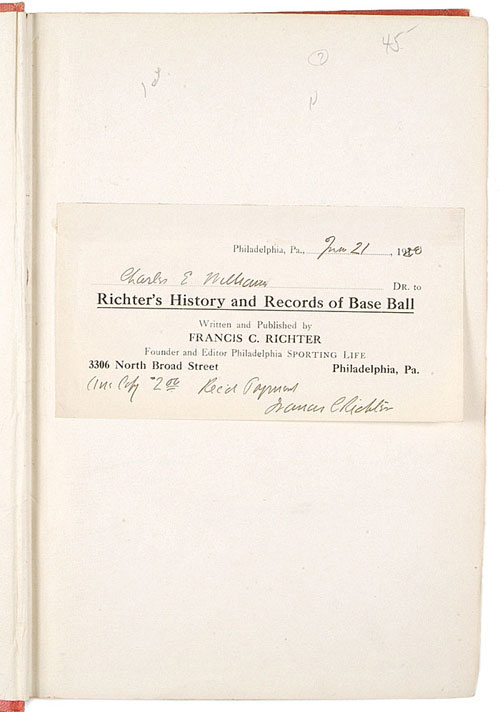 First edition of Richter's History and Records of Base Ball by Francis Richter, signed by the author on the interior. Richter's signature appears on the front flyleaf in a most unique and desirable manner, which is one of the reasons (along with its uncommonly superb condition) that highly respected longtime scholar Barry Sloate (who has specialized for many years in rare baseball books and authored some of the most respected articles ever published on the subject) chose this example for his personal collection. This book, along with a few other favorites he chose to keep for so many years from his original collection, have been consigned to this auction directly by Barry Sloate. "The Richter Book," as it is most commonly referred to by advanced collectors, was self-published by the author in 1914, and printed by The Dando Company of Philadelphia, Pennsylvania. Because it was self-published, Richter took an active role in promoting and selling the book. Attached to the front flyleaf of this volume is a printed receipt, signed and dated ("June 21, 1920") personally by Richter in black fountain pen (grading "10"), which acknowledges sale of the book to "Charles E. Williams" for a price of $2.00. Mr. Williams, in turn, later presented the book to his friend's young son ("William C. Whittle, Jr., III") in 1928, inscribing and signing it in black fountain pen on the following page. The Richter book is one of the few key historical baseball volumes that is widely regarded as essential for any great baseball library. The 306-page book chronicles the rich history of the game, from its origins to the time of its publication (1914), and is lavishly illustrated with photographs of nearly every important player and league official. As the founder and editor of The Sporting Life , Richter was more than qualified to write this book and in his foreword, he remarks, "This volume is designed to supply the growing need of a concise, yet complete, record of our National Game, from its remote inception and humble beginning to the present period of magnificent development to real national stature." It should be emphasized that the Richter Book is often found with serious condition problems. Perhaps relating to being self-published, a somewhat less than ideal and uneven quality paper was intentionally used, making the pages susceptible to damage. The pages in the offered volume are far better than most, with minor toning the most common flaw, most noticeably on the pages opposite the photo plates. The red cloth boards display only modest wear. In Very Good to Excellent condition overall. This volume would be a significant addition to any world-class baseball library. It is a most extraoraordinary copy of this scarce and important reference work, only the third signed edition we have seen offered, and one that has the special provenance of originating from The Barry Sloate Collection. Reserve $200. Estimate $400/$800+. SOLD FOR $830