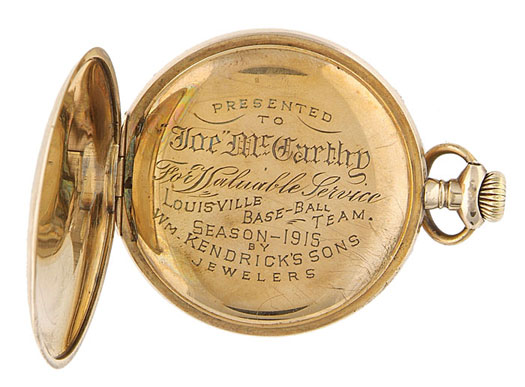 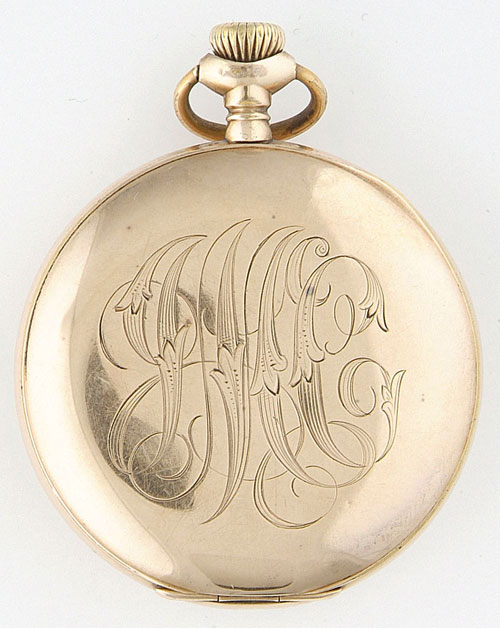 1916 Pocket Watch Presented to Joe McCarthy by the Louisville Colonels

Joe McCarthy holds numerous major league managerial records, including most World Championships (7; tied with Casey Stengel), best regular-season won-lost percentage (.615), and best World Series won-lost percentage (.698). Unbeknownst to most fans, he accomplished all of that despite having never played a single inning of major league baseball. McCarthy toiled for fifteen years in the minor leagues before receiving his big break in 1926, when the Cubs hired him to be their manager. While his minor-league career was largely undistinguished, it did have its highlights, as evidenced by this rare piece: a gold-colored pocket watch presented to McCarthy in 1916 as a member of the Louisville Colonels, champions of the American Association that year. The Elgin timepiece is beautifully engraved on the interior "Presented/to/Joe McCarthy/For Valuable Service/Louisville Base-Ball Team/Season-1916/by/Wm. Kendrick's Sons/Jewelers." The ornately engraved initials "JMC," appear on the reverse of the case. McCarthy, the club's second basemen, appeared in a team-high 168 games for the Colonels in 1916, finishing the year with a .259 average. 1916 marked his first season with Louisville and he later managed the club from 1919 through 1925, winning pennants in 1921 and 1925. Considered one of the greatest managers in baseball history, McCarthy was eventually elected to the Hall of Fame in 1957. The watch (two inches in diameter), which is in perfect working order, displays normal light handling wear, including a few "dings" along the edge of the casing and a minute crack to the watch face along the edge. Interesting note: circa 1916 business records and advertisements for Wm. Kendricks Sons confirm the jewelry store to be located at 339 Fourth Avenue in Louisville, Kentucky; copies accompany. This beautiful Elgin watch has some weight to it, and while at a glance one might assume the casing is gold, we can find no gold karat stamping and therefore believe that is just gold colored or gold plated. In Excellent condition overall. Reserve $400. Estimate (open). SOLD FOR $5,333