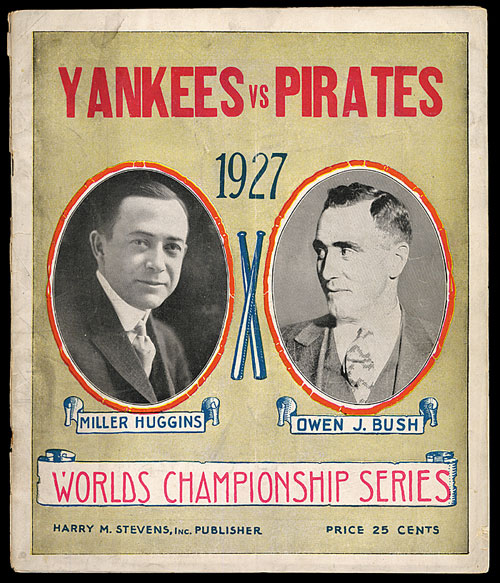 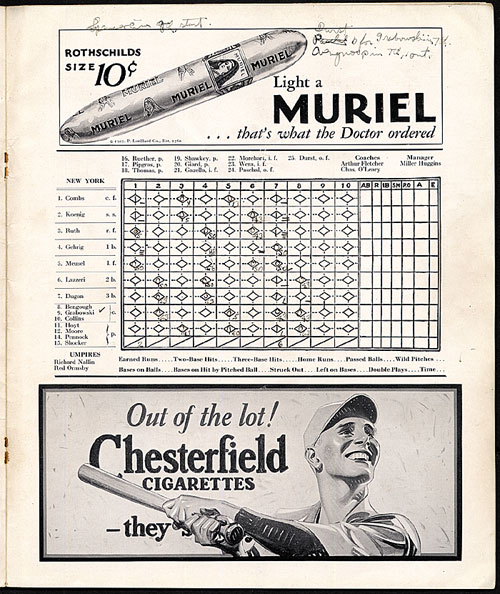 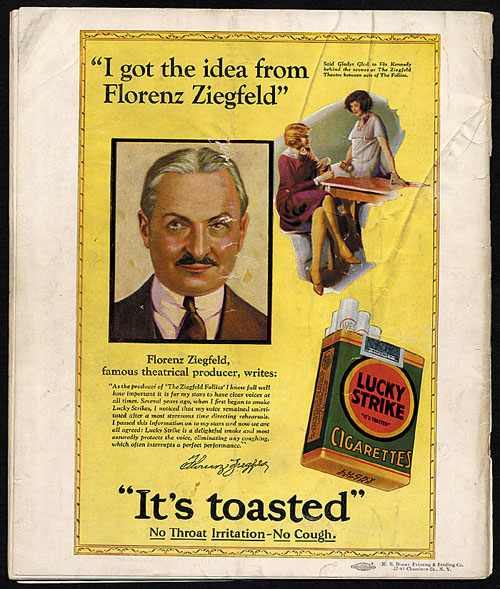 Substantial twenty-page large-format program issued for Game 3 of the 1927 World Series between the Yankees and Pirates at Yankee Stadium. The 1927 World Series program has a very broad collecting appeal and with good reason is universally regarded as one of the most desirable of all World Series programs. The cover features large portrait images of each club's respective manager, Miller Huggins and Owen Bush, while the interior pages include photos of league and team officials, as well as portraits of twenty-five members of both the Yankees and Pirates. Published by Harry M. Stevens. The program is neatly scored in black fountain pen for Game 3 of the series and records an 8-1 Yankees victory (a few additional ink notations, recording player substitutions for each club, appear along the top of each respective lineup page). The preprinted lineups include Ruth, Gehrig, Lazzeri, Combs, and Meusel for New York, and L. Waner, P. Waner, and Traynor for Pittsburgh. Ruth, fittingly, hit the first home run of the Series in Game 3, with his seventh-inning blast duly noted on the score sheet. The Yankees, bolstered by a powerful and legendary lineup, which will forever be known as "Murderers' Row," swept the Pirates in the 1927 World Series, thus cementing their reputation as the greatest team of all time. The program (9.25 x 11 inches) displays a moderate vertical fold (very common, usually as a result of being folded and carried in the back pocket) and there is nearly a complete separation of the covers from the spine (the covers are attached by an approximately one-inch section of paper directly in the middle of the spine). General wear is evident on the covers, including a few creases on the back cover and a few minor edge tears. The interior pages are all generally bright and clean. In Very Good condition. This is a fine mid-grade example of this highly prized program that, ideally, records one of Ruth's two home runs in the Series. Together with a period newspaper clipping, from the New York Sun, covering Game 3 of the 1927 World Series. Reserve $500. Estimate $1,000+. SOLD FOR $1,067