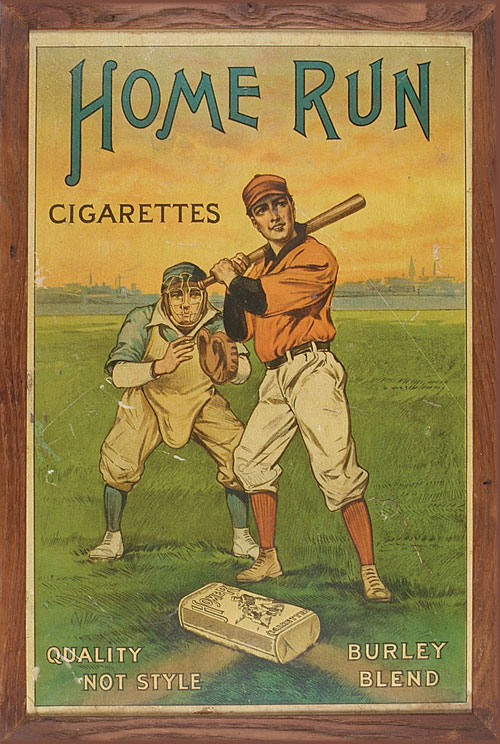 Circa 1910 cardboard advertising poster for Home Run Cigarettes features a batter and catcher in full color with a pack of Home Run Cigarettes serving as home plate. This classic full-color lithographic advertising poster is one of the rarest and most impressive of all 1910-era generic baseball advertising pieces. This is a particularly well known piece in the general antique-advertising collecting world, and has a higher profile in that collecting field than in the baseball collecting world. The advertising display is also featured in several books on classic American advertising lithography. This is one of several examples we have offered over the years. Interestingly, on this example there has been what appears to be a vintage, deliberate alteration to the illustration of the cigarette pack that is serving as the "home plate." On the side of the package it originally read "20 for 5 cents;" however, here, that wording has been neatly painted over in gold. The fact that it has been done so meticulously and unobtrusively (the color blends in perfectly with design of the package) makes it almost a certainty that it was done either by the company itself, or the retailer. Home Run Cigarettes were marketed from the 1910 era all the way into the 1940s. Obviously, the price of a pack of cigarettes increased over time and it is likely that this sign saw use for many years and it was simply more cost effective to mask the original price than to retire the sign or create entirely new posters. This is the first example we have seen featuring such a price alteration. The poster (12 x 18 inches), which is produced on extremely thick stock (rigid and approximately one-quarter inch thick), displays a number of minor flaws consistent with its age, fragile nature, and former use, including an approximate three-inch long diagonal tear in the lower right (no paper loss), minor scratches, a few small abrasions, and general surface wear. Despite the modest flaws, the colors remain bold and vibrant, and the piece displays an overall Excellent appearance. The original frame is no longer present, but the piece is now housed in a new wooden frame measuring 13 x 19.25 inches. Reserve $500. Estimate (open). SOLD FOR $1,541