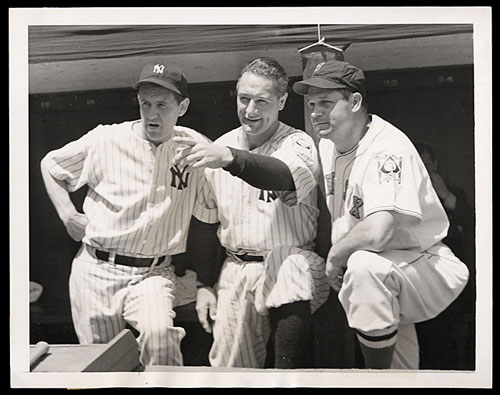 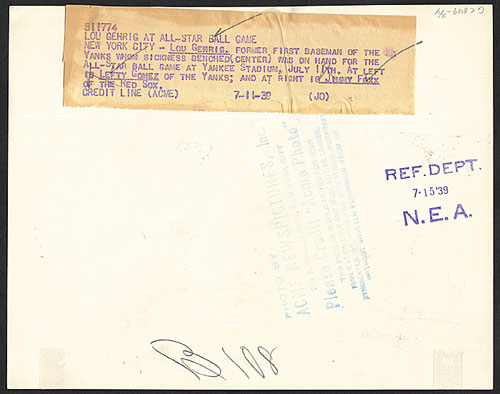 Original news photo, issued by Acme Newspictures, Inc., capturing Lou Gehrig, Lefty Gomez, and Jimmie Foxx posing together on the steps of the dugout prior to the 1939 All-Star Game held at Yankee Stadium on July 11th. Featured on the reverse are the original paper news caption, dated "7-11-39," a Acme Newspictures, Inc., credit stamp, and an additional date stamp that reads "7-15-39." The 1939 All-Star Game marked Lou Gehrig's final appearance at the midsummer classic. Gehrig, who had taken himself out of the Yankees lineup on May 2nd, was seriously ill at the time. Just three weeks earlier, on June 20th, the Mayo Clinic concluded that Gehrig was suffering from amyotrophic lateral sclerosis, a terminal disease for which there was, and still is, no cure. Although Gehrig could no longer play, he was named the honorary captain for the American League team in 1939. This poignant photo pictures him in good spirits as he points out something to both Lefty Gomez and Jimmie Foxx, each of whom stands at his side. The photo (9 x 7 inches) is in remarkable condition for a working press photo, with just a few minor surface wrinkles (nearly all of which can only be viewed at certain angles) and two small pieces of tape residue on the reverse. In Excellent to Mint condition. This is a magnificent original Gehrig news photo dating from his final season in 45tripes. Reserve $200. Estimate $400+. SOLD FOR $593