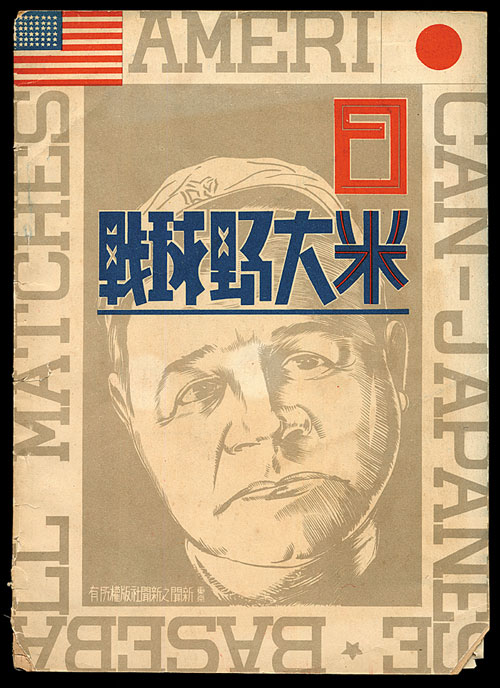 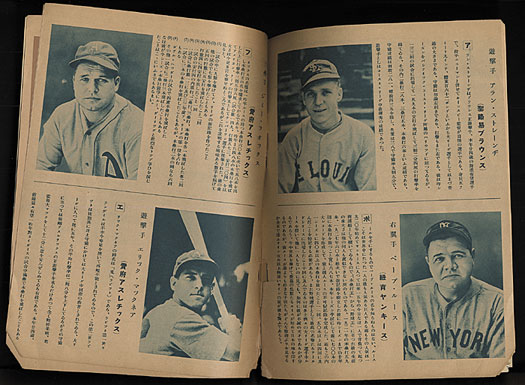 1934 World Tour Baseball Program with Ruth on the Cover

Presented is one of the great classics of all World Tour items: Rare Japanese baseball program issued during the 1934 Tour of Japan by Connie Mack's "All-American" team. The program features an illustration of Ruth on the cover, as well as a full-page image of the famed "Sultan of Swat" in a batting pose on the first page. Ruth is also pictured a third time, in the section featuring photos and biographies of all fourteen American players, including Lou Gehrig, Jimmie Foxx, Lefty Grove, and Moe Berg. The program also features pictures and biographies of numerous Japanese players. An insert card (4.75 x 8.25 inches) picturing an unidentified Japanese player is included within. The 1934 tour of Japan by Connie Mack's "All-American" team is considered by many to be the most famous overseas baseball tour in history. The reason is twofold. This was the first and only overseas tour of Babe Ruth's career, and his popularity, even in Japan, was so great that he was treated like royalty by the Japanese people. The second, lesser-known reason had to do with the fact that Moe Berg was on the team. Berg was a journeyman catcher of little note and his inclusion on the roster was not by Connie Mack's choosing, but rather by that of the United States government. Unbeknownst to everyone at the time, Berg, a Princeton graduate who spoke seven different languages, was living a dual life. On the surface he was a professional ballplayer. His other career, however, was that of an undercover spy for the U.S. Government. Intelligence officials saw the 1934 baseball tour as an ideal opportunity to acquire important information regarding Japan's major cities, and for that reason Berg was hastily added to the roster just before the team set sail. Armed with a movie camera, Berg took hundreds of reconnaissance films that were later used by the government during World War II. Berg's secret agenda aside, the tour also further fueled the popularity of baseball in Japan and in December 1934, Japan's first professional baseball league was formed. This is an outstanding piece for display. The twenty-two page program (7.5 x 10.5 inches) has a corner chip in the lower right that affects both covers and all of the pages, minor tears and light separation along the lower spine, and a few minor creases. In Very Good condition overall. Reserve $300. Estimate $500/$1,000. SOLD FOR $3,259