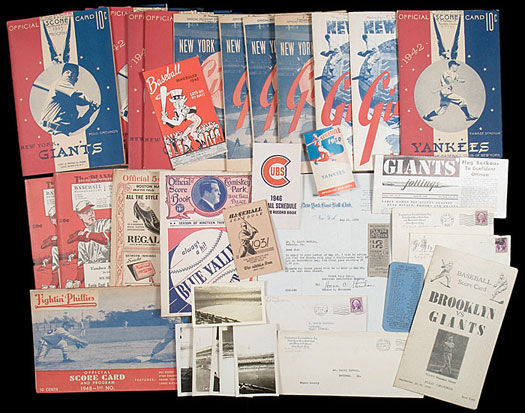 This exceptional and fascinating collection of seventy-five regular-season major league baseball scorecards, spanning the years 1928-1950, has a very special provenance: all originate from the personal collection of Keith Sutton, who was one of the sixteen founding members of SABR (Society for American Baseball Research). While the collection includes many early and desirable examples, including two Yankees scorecards from 1928, what truly sets this collection apart is all of the extra items that accompany. Sutton appeared to save everything, and included here are numerous issues of Giants Jotting s, the official New York Giants newsletter, six small snapshot photos taken at the Polo Grounds, team schedule cards from various years, correspondence from the New York Giants (highlighted by a gorgeous 1935 typed-signed letter to Sutton, on official team letterhead, signed by Horace Stoneham), and many of the original envelopes sent to Sutton. Also included is a rare, specially produced scorecard for each of the Giants' final two "Farewell" games of the 1934 season on September 29 and 30th against the Dodgers. The fold-over scorecard pictures Bill Terry on the cover, while the reverse is lettered "A trying team must be given credit - Fare-well and good luck to our baseball fans - Win or lose be a sport."