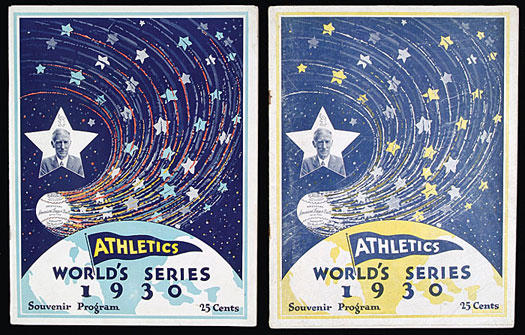 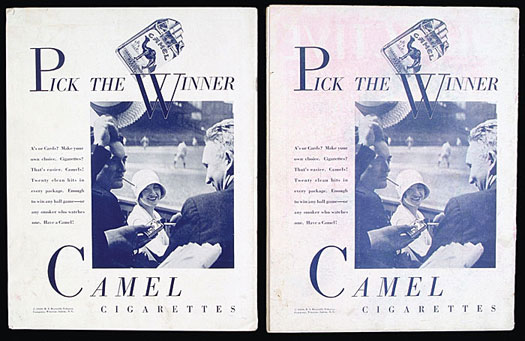 In 1930 the Philadelphia A's, for reasons unknown, issued its World Series program with two different color schemes for the cover: one blue and the other yellow. In all other aspects, the covers are the identical. Oddly, while all of the interior pages are identical, their placement within each respective program varies between the two examples. Offered here are examples of both the blue- and yellow-cover programs issued by the A's during the 1930 World Series. Based upon those that we have seen over the years, the yellow-cover program appears to be the rarer of the two. Each forty-page program (8.5 x 11 inches) features numerous photos of individual A's team members, various team and league officials, and a composite team photo of the St. Louis Cardinals. Neither program has been scored. The blue-cover program is in Very Good condition, with moderate creases, minor staining, and light surface wear. The yellow-cover program is in Good to Very Good condition, with oxidation to the staples, tape repair along the staples on some of the interior pages and moderate wear. Total: 2 programs. Reserve $200. Estimate $400/$800.
SOLD FOR $474