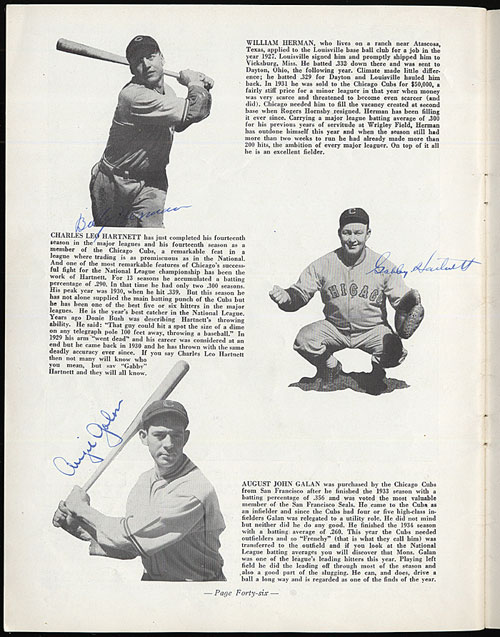 Collection of seventeen different World Series programs spanning the years 1930 through 1939. This collection represents a near-complete set from the entire decade of the 1930s and is missing only the 1932 Cubs example for completion (only one program was issued for the subway series between the Yankees and Giants in both 1936 and 1937). All of the greatest teams and stars of the 1930s, from Ruth and Gehrig to Cochrane and Hartnett, are represented. Among the many highlights are two signed examples. The 1934 Cardinals program has been signed on the interior by Leo Durocher, while the 1935 Tigers program has been signed on the interior by seventeen individuals, including Commissioner Landis and five other Hall of Fame players. 1930: Cardinals (not scored; Vg) and A's (scored in pencil for Game 1; Vg, with the four center pages detached from spine). 1931: Cardinals (not scored; Vg) and A's (only the first inning has been scored in pencil; Vg, with the four center pages detached from the spine). 1932: Yankees (not scored; Vg-Ex, with a tiny corner chip on the back cover and light surface wear). 1933: Giants (not scored; Vg, with light water staining throughout) and Senators (not scored; Gd-Vg). 1934: Cardinals (not scored; signed by Leo Durocher on the interior next to his image; Vg, with a small stain along the top border of each page) and Tigers (not scored; Vg). 1935: Cubs (not scored; Vg) and Tigers (missing the interior scorecard section; signed in blue ink [grading "9" or "10"] on the interior by the following seventeen executives and players: Kenesaw Landis , Mickey Cochrane , Goose Goslin , Charlie Gehringer , Elden Auker, Tommy Bridges, Herman Clifton, Ray Hayworth, Marvin Owen, Henry Schuble, Gerald Walker, Charlie Grimm, Billy Herman , Gabby Hartnett , Augie Galan, Larry French, and Charlie Root; Vg). 1936: Yankees/Giants (not scored; Vg). 1937: Yankees/Giants (not scored; Vg-Ex, with light foxing on the cover). 1938: Cubs (not scored; Ex) and Yankees (scored in pencil for Game 4; Vg-Ex). 1939: Reds (scored in pencil for Game 3; Vg) and Yankees (not scored; Vg-Ex). This is a beautiful and extremely substantial collection carefully assembled one program at a time. Total: 17 programs. LOA from James Spence/JSA. Reserve $2,000. Estimate (open). SOLD FOR $4,148