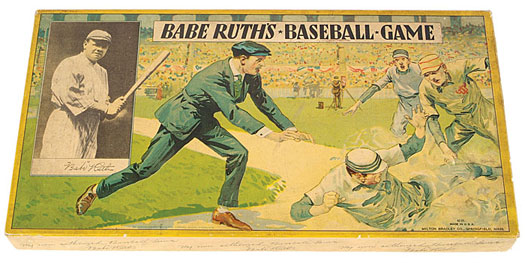 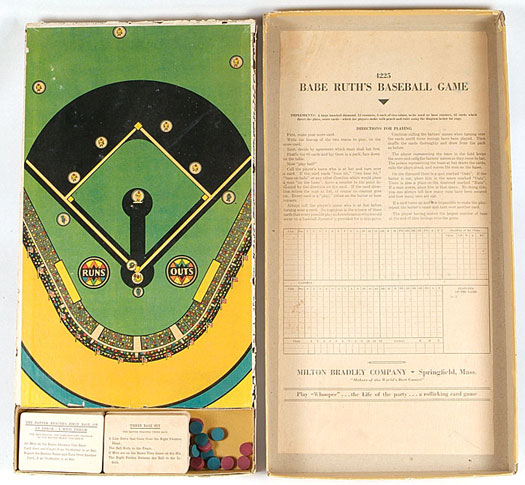 Exceedingly rare and significant variation of Babe Ruth's Baseball Game , issued in 1936 by Milton Bradley, not to be confused with the more common variety of Babe Ruth's Baseball Game (which is a classic in its own right). In fact, this is the first example of this game we have ever seen, let alone offered! What makes this Babe Ruth game version so different is that it features an early cover design for the game that was changed shortly after production started. This is one of only two known examples bearing this rare cover variation. Both reside in the incomparable baseball-game collection of Dr. Mark Cooper. This example has been consigned directly by Dr. Cooper. It is his duplicate. The colorful graphics picture a game-in-progess scene as a fielder attempts to tag a runner sliding into a base. A large inset photo of Ruth as a member of the New York Yankees appears to the left, below which is Ruth's facsimile signature. Sophisticated collectors will immediately recognize the cover illustration, as it was a stock image used on two earlier baseball board games issued by McLoughlin Bros. nearly twenty-five years earlier ( Home Base Ball Game , 1911, and Baseball and Checkers: Two Game Combination , circa 1918). The use of that earlier image is not surprising, since Milton Bradley purchased McLoughlin Bros. in 1920. Even though this game was issued two years after Ruth retired, it was one of the more popular games bearing his endorsement. Adding to its appeal is the fact that the game was officially sanctioned by Ruth, as noted on all four side panels of the lid which read, numerous times, "My own authorized Baseball Game - Babe Ruth" (the words and signature are all facsimile scripted in Ruth's hand). It is not known how soon after the introduction of this game that Milton Bradley changed its cover design, but it must have been fairly quickly given the few surviving examples. Whereas the original McLoughlin artwork pictured players in turn-of-the-century uniforms, the later cover design featured a modern illustration of a Yankees player in full swing (with a catcher behind him). Interestingly, the batter's image on the newer cover is generic in nature but could have been mistaken for Ruth had he not been pictured batting right-handed. The game was played using eighty-five cards, which determined the action, and wooden pegs as base runners. The base of the box was comprised of the game board and storage section for the cards and pegs, while the directions were printed on the interior lid. Complete with all of its original components. The cover is in exceptional condition, displaying just light wear as expected with any game of this age, and is remarkably free of any major defects, including tears to the flaps. The interior game board, cards, and pegs are in similar high grade. In Excellent condition overall. 19.25 x 10 x 2 inches. Reserve $400. Estimate $800/$1,200.
SOLD FOR $1,778