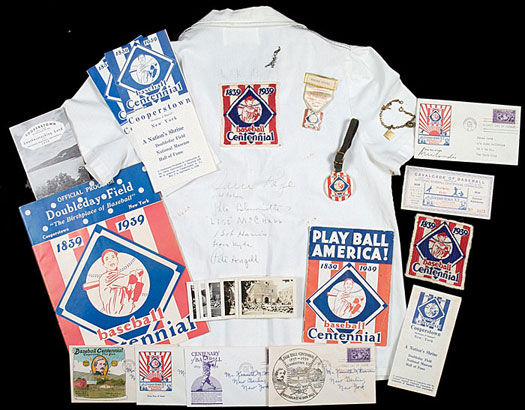 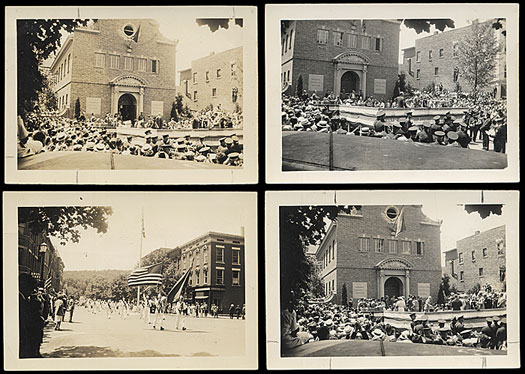 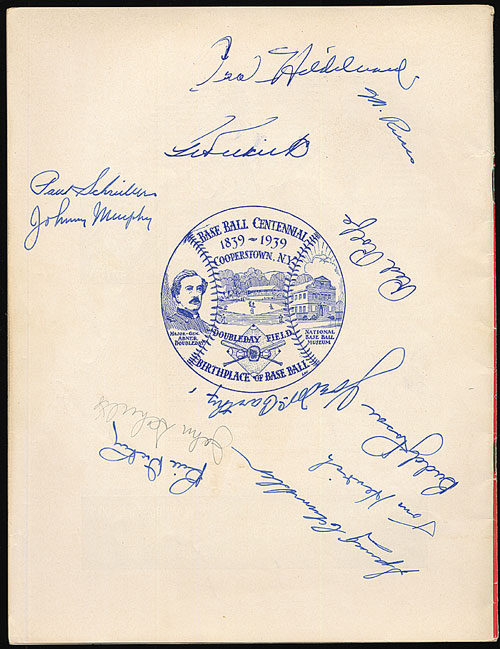 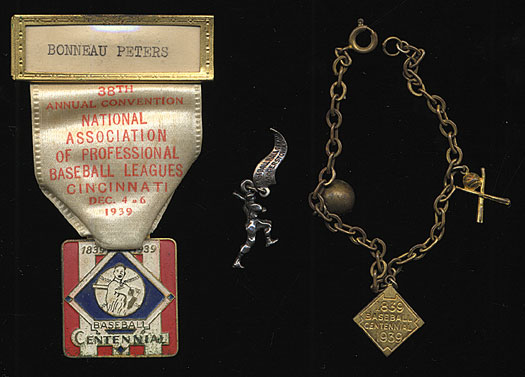 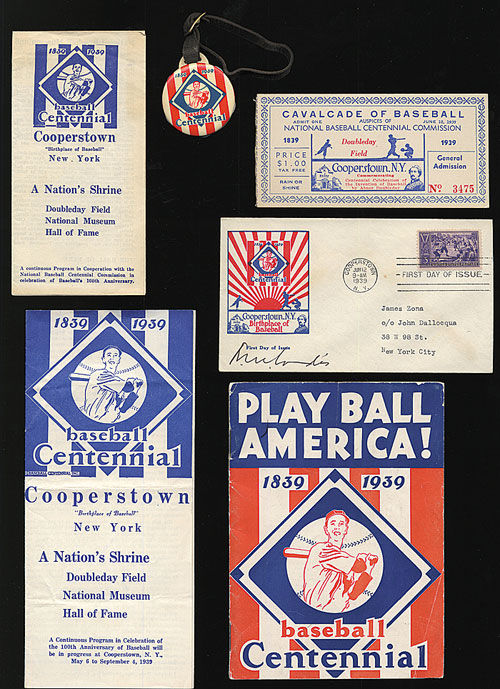 The 1939 Baseball Centennial, commemorating the 100th anniversary of the "birth" of baseball, was a year-long celebration highlighted by the dedication of the Baseball Hall of Fame on June 12th. This extraordinary memorabilia collection, which commemorates that historic event, is notable for the many rarities it contains, including nine unique snapshot photos capturing the festivities in Cooperstown on June 12th, from the actual ribbon cutting by Ford Frick at the dedication of the Baseball Hall of Fame to game-in-action scenes at Doubleday Field. Also featured here are a signed program, numerous first-day covers, a patch, a ticket stub, umpire's scorer, and a few other seldom-seen items. All of this material originates from one of the most advanced Baseball Centennial collections ever assembled, which took years to put together. 1-9) Nine phenomenal snapshot photos (3.5 x 2.5 inches) capturing the events in Cooperstown on June 12th. Included here are photos picturing Ford Frick cutting the ribbon to officially open the Baseball Hall of Fame, the first Hall of Fame inductee (Connie Mack) emerging from the Hall's doors to take his place on the dais, the parade through town, the mayor of Cooperstown delivering the welcoming address, two scenes from an 1850s reenactment game at Doubleday Field, Al Schacht performing on the mound at Doubleday Field, and other general scenes from the day. Each photo features a vintage handwritten pencil notation on the reverse describing the respective scene. Excellent condition overall. 10) Scarce Baseball Centennial program, issued for an August 21, 1939, exhibition game between the New York Yankees and Newark Bears at Doubleday Field, signed on the back cover in blue fountain pen (grading "10") by the following eleven members of the 1939 New York Yankees: McCarthy (Mgr.), Dickey, Chandler, Henrich, Rosar, Rolfe, Hildebrand, Russo, Selkirk, Murphy, and Schreiber (coach). The program is also signed in pencil by John Schulte (unknown). Ex, with moderate wear, a light vertical fold, and a partially filled in score sheet for the Bears. 11) Ticket stub (5.5 x 2.75 inches) for the Cavalcade of Baseball held at Doubleday Field on June 12, 1939. This ticket granted admission to watch an exhibition game between National and American League stars. The game was the culmination of the day's events at Cooperstown. In Very Good to Excellent condition, with a few moderate creases. 12) Rare Baseball Centennial cloth patch. This is the very same patch that appeared on the sleeves of every major league uniform that year, as well as countless others at different organizational levels. This example appears to have been removed from a garment, as stitch holes are evident along the borders; otherwise Ex-Mt. 13) Rare "Play Ball America" Baseball Centennial pamphlet. This forty-page pamphlet (5 x 7 inches) was issued by the National Baseball Centennial Commission to instruct towns how to organize their own Baseball Centennial celebrations at the local level. Vg-Ex, with a center fold. 14) Baseball Centennial first-day cover, postmarked June 12, 1939, Cooperstown, New York, signed by Baseball Commissioner Kenesaw Landis in in black fountain pen ("10") on the front. Ex. 15) Baseball Centennial watch fob/umpire's scorer. Ex, with light surface wear. 16-17) Baseball Centennial charm bracelet and tiny Hall of Fame charm. Ex, with light tarnishing. 18) Delegate's ribbon pin, featuring a Baseball Centennial medal. The badge was issued to "Bonneau Peters," who was a delegate at the "38th Annual Convention National Association of Professional Baseball Leagues Cincinnati Dec 4-6 1939." Vg. 19) Youth "milkman's delivery" shirt featuring a Baseball Centennial patch on the reverse (which, obviously, can be removed if desired). The shirt has been signed (front and back) by seventeen individuals, nearly all of whom were members of the 1939 Williamsport Grays, a Class A affiliate of the Philadelphia Athletics and a member of the Eastern League. The most notable signature is that of "Mule" Haas, who starred with the Athletics during the club's 1929-1931 championship dynasty. Haas retired from organized ball following the 1939 season. A few of the other signers also played in the majors at one time. Ex. 20-28) Nine Baseball Centennial first-day covers, each postmarked Cooperstown, June 12, 1939, and bearing a Baseball Centennial stamp. All have been addressed and mailed, with one having been signed by Postmaster General James Farley. Five different styles of envelope are represented here. Most display a small linear area of toning; otherwise Ex-Mt. 29-31) Three Baseball Centennial Cooperstown brochures. Two measure 4 x 9 inches, while the other is slightly smaller (3.25 x 6.25 inches). All are identical in content and list the schedule of Baseball Centennial events in Cooperstown in 1939. Ex. 32-33) Two 1939 Cooperstown travel brochures noting the Baseball Centennial. Ex. Together with period newspaper clipping about the Centennial. Total: 33 items. LOA from James Spence/JSA. Reserve $500. Estimate (open). SOLD FOR $1,067