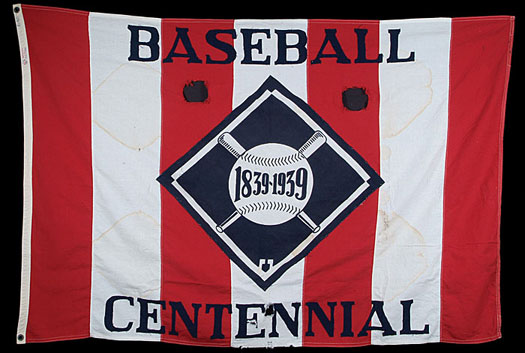 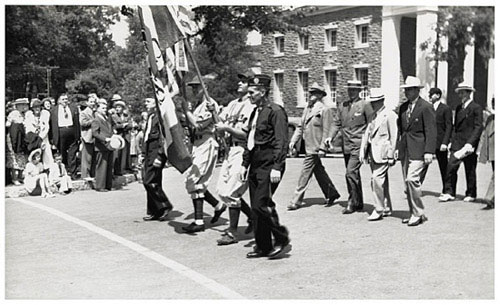 1939 was a special year in baseball history, as it marked the 100th anniversary of our national pastime. The highlight of the yearlong festivities was the official dedication of the Baseball Hall of Fame on June 12th in Cooperstown, New York. Offered here is a rare Centennial of Baseball cloth banner that was once proudly displayed during the 1939 Hall of Fame dedication ceremony. This is only the second example of this banner that we have ever seen. The first was featured as Lot 1014 in Robert Edward Auctions' May 2007 sale, where it sold for $7,637. The patriotic red, white, and blue banner features the Baseball Centennial logo in the center, with the words "Baseball" and "Centennial" lettered, respectively, along the top and bottom borders. Two metal grommets, for use in hanging, are featured along the left border. An Annin manufacturing label also appears on the left border. Annin, founded in 1847, is the oldest and largest manufacturer of flags in the United States. This banner was originally intended to be displayed on a hand-held mast, as indicated by a photo taken at the June 12, 1939, Cooperstown celebration, which can be viewed on our website (the photo does not accompany the banner; it was originally sold in our 2007 auction and is used on our website strictly for illustration purposes).

The banner (approximately 48 x 72 inches) displays two square-shaped holes (each approximately 3.5 x 3.5 inches) on either side of the center logo, just below the word "Baseball," as well as two smaller holes (1 x 2 inches and .5 x .5 inches, respectively) near the center base (next to the letters "E" and "N" in "Centennial"), and a few tiny tears. A few large stains affect the white-panel areas of the banner. While purely speculation, the uniform size of the two holes along the top and their near identical placement on each side of the banner seems to imply that they were deliberately made for some purpose. The fact that each hole is slightly larger than the diameter of a baseball gives rise to the thought that maybe the banner was once used as a target, maybe even during the festivities, with prizes given to kids who were accurate enough to throw a ball through the hole. Regardless, it remains an outstanding and exceedingly rare souvenir from the historic dedication of the Hall of Fame and celebration of baseball's 100th anniversary in Cooperstown in 1939. It should also be noted that most of the major flaws associated with this piece can most likely be professionally repaired, whereupon it would once again display much as it did when first flown in Cooperstown seventy-three years ago. Reserve $500. Estimate (open). SOLD FOR $2,015