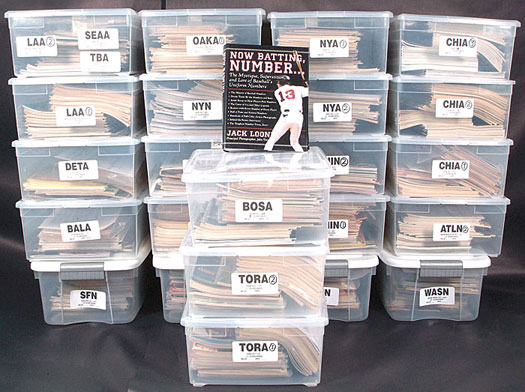 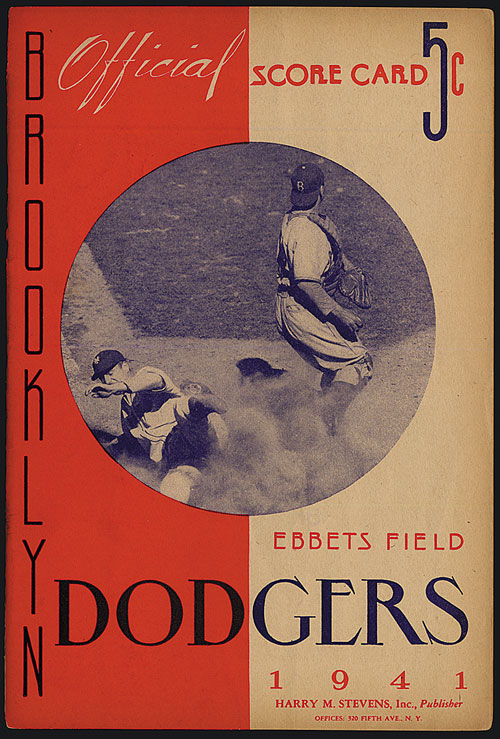 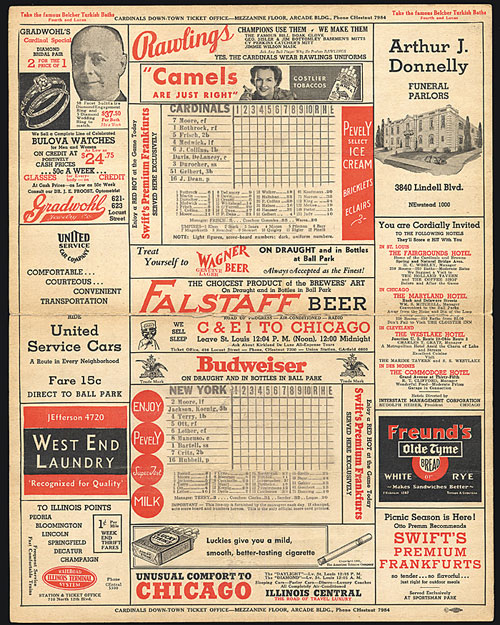 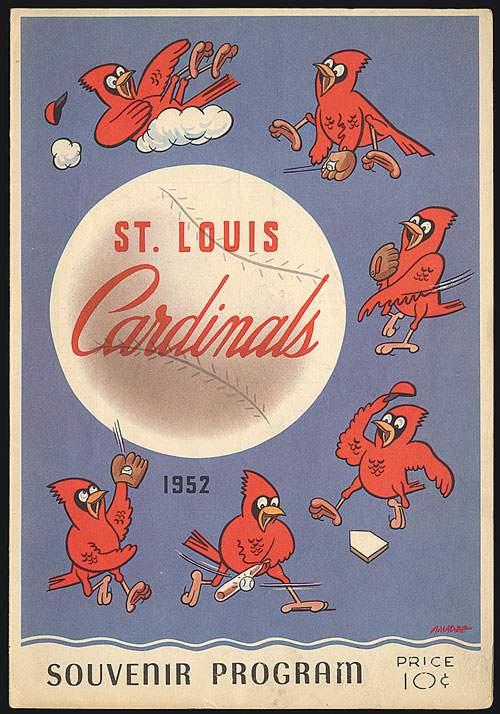 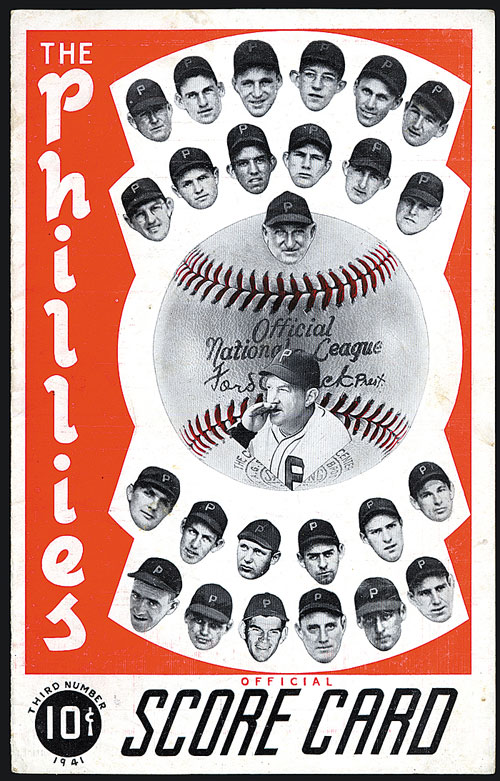 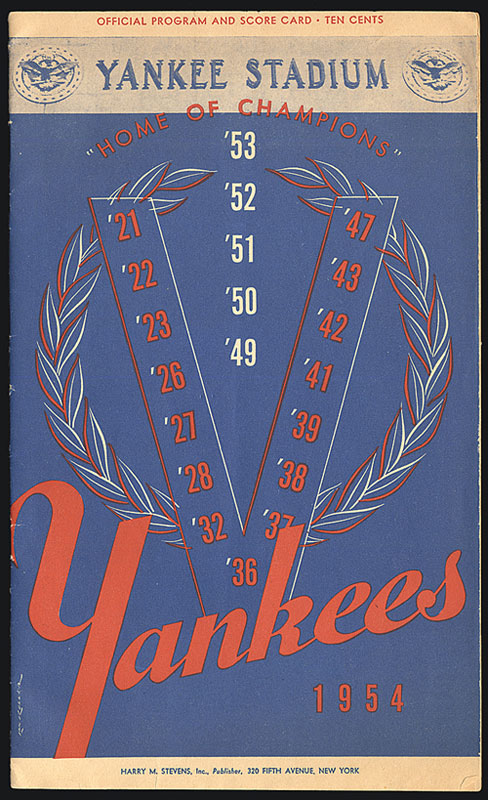 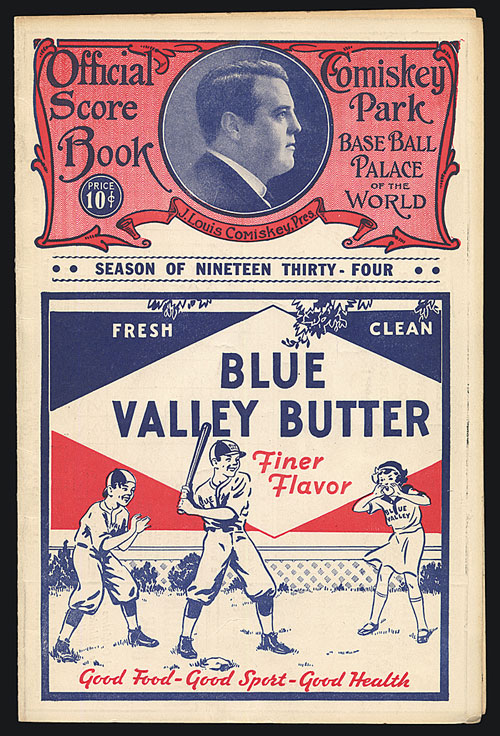 Comprehensive Collection of Over 1,700 Major League Baseball Scorecards (1930-2005) - Used as the Source Material for the Book

In 2006 author and baseball historian Jack Looney (our consignor) published the universally recognized comprehensive work on the history of baseball uniform numbers titled Now Batting, Number...The Mystique, Superstition, and Lore of Baseball's Uniform Numbers (Black Dog & Leventhal, New York). The book, which was a labor of love, took nearly fourteen years to complete, with Looney traversing the country many times over in search of information. Included among his many stops were visits to each major league city, where he met with team officials and local historians, the Baseball Hall of Fame, and each club's respective spring-training site, where he spent countless hours interviewing equipment managers, all of whom provided valuable information, stories, and anecdotes that otherwise might have been lost to the ages and that are recounted in the book. The cornerstone of his academic research, however, is in the collection offered here: an astonishing 1,747 different regular-season major league scorecards spanning the years 1930 through 2009. (The modern-era scorecards are much more substantial than the early vintage fold-over scorecards and are sometimes in the form of a program or magazine.) By examining these scorecards, together with his other data, Looney was able to compile accurate records of every uniform number worn by every player on every team since 1929, which was the first year in which uniform numbers became standard practice (but if you read the book you will learn that uniform numbers appeared much earlier, albeit on a limited basis). While the hours, days, months, and years it took searching for these various scorecards cannot be measured in dollars, the value of their actual cost is much less ambiguous. According to his record keeping and conservative estimates, Looney spent approximately $35,000 on this collection; buying from various dealers, sports auction houses, and then later eBay, between the years 1991 and 2005. Every single Major League team is represented in this collection with the exception of the Colorado Rockies and Tampa Bay Rays (this collection of scorecards filled in many "holes" that were left following traditional research, including much time spent at the Baseball Hall of Fame Library). It should be noted that approximately twenty percent of the scorecards in the collection date between the years 1930 and 1950, and, obviously, countless Hall of Famers are represented within the lineups. Ideally, Looney kept a meticulous inventory of the scorecards for each team in the form of an Excel spreadsheet, which is available upon request to any prospective bidder. The inventory includes the date of the contest, the approximate condition of the card, whether it is scored or not, the opponent, the final score (if known), whether or not the scorecard is autographed (and if so, by whom), any noteworthy events regarding the game, and his approximate cost for the piece at the time. For our abbreviated listing here, we will simply list the total number of scorecards for each team represented. National League: Boston/Milwaukee/Atlanta (100); Chicago (87), Cincinnati (25); Florida (2); Houston (31); Brooklyn/LA (96); Milwaukee (15); NY Mets (49); Philadelphia (117); Pittsburgh (53); San Diego (8), NY/San Francisco (79); St. Louis (134); and Montreal/Washington (58). American League: St. Louis/Baltimore (36); Boston (79); California (79); Chicago (196); Cleveland (37); Detroit (54); Kansas City (43); Washington/Minnesota (51); New York (81); Philadelphia/Kansas City/Oakland (108); Washington/Texas (77); and Toronto (52). This is the largest and most comprehensive collection of major league scorecards we have ever seen, let alone handled. Because they were originally obtained for research purposes, and not as collectibles or as an investment vehicle, our consignor has no expectation with reference to value, and realizes the archive may sell for less than his original purchase price (and far less than if sold individually or in smaller groups), but prefers to offer them intact as a single collection. No matter how one addresses this collection, however, it remains a very substantial grouping in terms of dollar value, both for the information it contains for baseball historians/researchers (this would be an ideal museum or library acquisition) or for the tremendous "break value" it offers for dealers and/or collectors. Included with the lot is a copy of Now Batting, Number...The Mystique, Superstition, and Lore of Baseball's Uniform Numbers, autographed by the author, as well as twenty-two various modern-day postseason programs (NLCS/ALCS/World Series; 1976-2006). Total: 1,747 scorecards, plus 22 various modern postseason programs. The substantial size/weight of this item requires that there will be a shipping charge for this lot (which will vary depending upon where it is being shipped). The shipping charge will be billed separately from the auction invoice. Reserve $5,000. Estimate (open). SOLD FOR $11,258