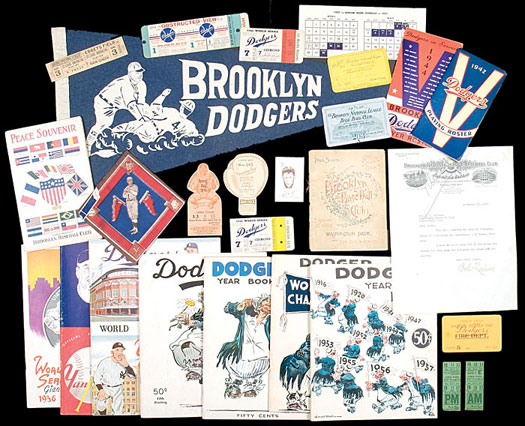 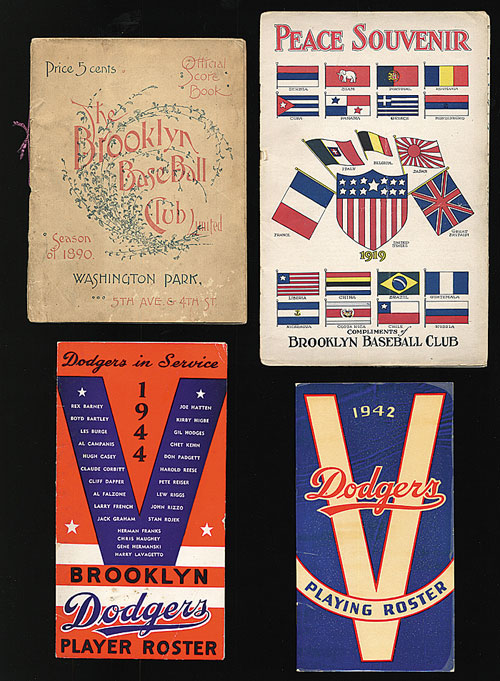 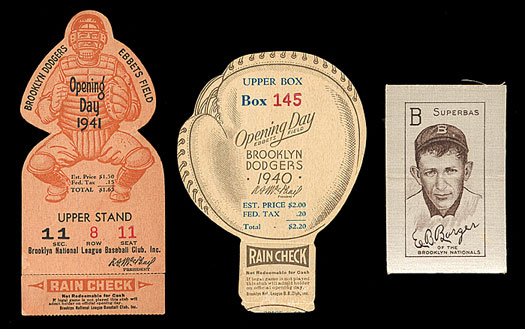 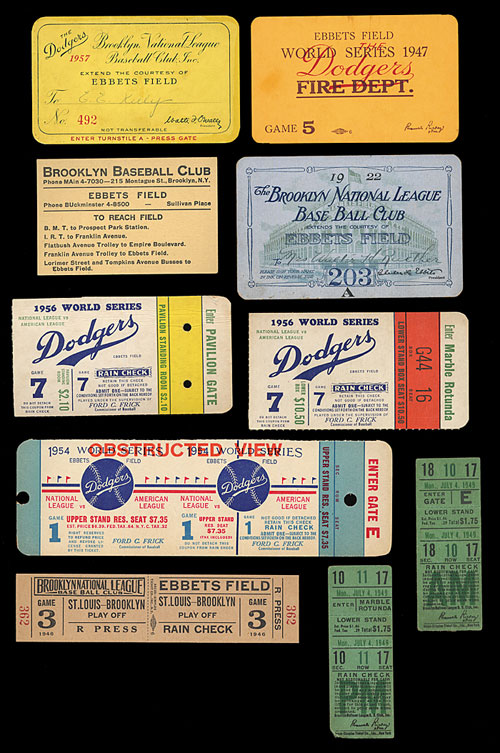 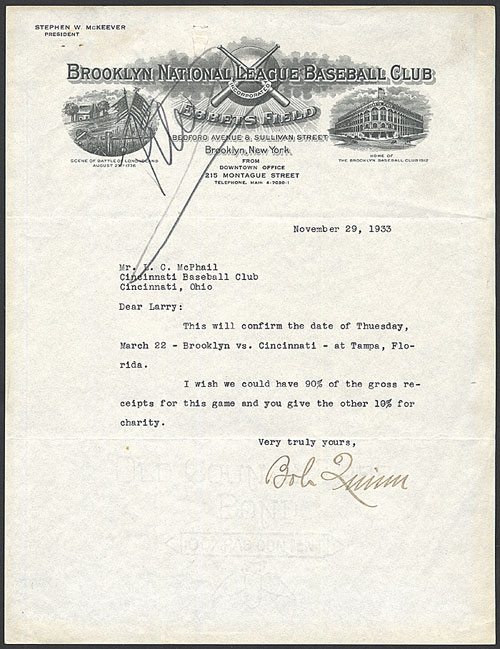 This eclectic collection is comprised mainly of Brooklyn Dodgers material, including a number of seldom-seen items, but also features a few pieces relating to both crosstown rivals: the Yankees and Giants. All of these items are from the outstanding collection of an extremely advanced longtime Brooklyn Dodgers collector that is presented in a number of lots in this auction. While many of the most valuable items in the collection are offered individually, these are all quality items, all carefully assembled by a true connoisseur, and all deemed worthy of his collection. There are many hidden gems in this lot. Programs and Scorecards (5): 1) 1890 Brooklyn (vs. Chicago). The thirty-two page program features portrait images and biographies of seventeen team members, including George Stallings. The preprinted lineup for Chicago includes Anson. Neatly scored in pencil. VG, with the covers detached from the spine. 2) Rare 1919 "Peace Souvenir" program issued by the Brooklyn Dodgers. The special eight-page program was specially produced to honor all of the members of the Brooklyn Dodgers organization, both players and executives, who served in the military during World War I. All of the members are pictured, and the rear cover unfolds to reveal a large team photo of the 1919 Brooklyn club. The covers are detached from the spine, with the covers displaying tape repair on the interior along the center split. In Good to Very Good condition. 3) 1930 Pittsburgh Pirates (vs. Brooklyn). Substantial, large-format twelve-page program features portrait images of twenty-five Pirates team members. Scored. Vg. 4) 1942 Yankees (vs. Cleveland). Scored. Vg. 5) 1952 Giants (vs. Cincinnati). Scored. Ex. Cards (2): 1) 1910 S74 baseball tobacco silks (white) Cy Barger with rare advertising back. Nr-Mt. 2) 1914 B18 blanket Nap Rucker. Ex, with a small piece of paper identifying Rucker by name affixed to the reverse. Pennant: circa 1940s Brooklyn Dodgers. Ex, with a small portion of the tip cut off. World Series Tickets/Passes (4): 1) 1954 Brooklyn Dodgers phantom. Game 1 full proof ticket ("Obstructed View"). Two small cancellation holes; otherwise Ex-Mt. 2-3) Two 1956 Brooklyn Dodgers ticket stubs for Game 7. One is for a "Lower Stand Box" (Ex-Mt), the other for the "Pavillion Standing Room" (Vg, with two cancellation holes and minor creases throughout). 4) 1947 Brooklyn Dodgers World Series pass for Game 5. Issued to the "Fire Dept." Ex. Regular-Season Tickets/Passes (8): 1) 1940 Brooklyn Dodgers opening day. Die-cut ticket designed in the shape of a glove. Ex. 2) 1941 Brooklyn Dodgers opening day. Die-cut ticket pictures a full image of a catcher. Rain-check stub taped to the ticket on the reverse; otherwise Ex. 3) Rare full 1946 Brooklyn Dodgers playoff ticket for Game 3 vs. St. Louis. The Dodgers were swept by St. Louis in the best-of-three playoff series for the National League pennant in 1946, thereby making this ticket unnecessary, not to mention an extremely rare souvenir from that almost-championship season. The blue-ink notation "Chicago Times Press Box Right Wing" is written twice on the reverse; otherwise Nr-Mt. 4-5) Complimentary pair of Brooklyn Dodgers tickets to the July 4, 1949, doubleheader vs. Philadelphia. The tickets, which are not for the same seats, are stamped, respectively, "AM" (Ex) and "PM" (Vg-Ex). 6) New York Mets ticket stub for July 31, 1964, vs. Houston. 7) 1922 Brooklyn Dodgers season pass. Numbered "203" and issued to "Mrs. Walter H Ruether." Vg, with surface loss on the reverse. 8) 1957 Brooklyn Dodgers season pass from the club's final year in Brooklyn. Numbered "492" and issued to "E. E. Kelly." Ex. World Series Programs (3): 1936 Yankees/Giants. Not scored. Ex. 2) 1955 Dodgers (vs. Yankees). Scored for Game 4, which was won by Brooklyn 8-5. Vg-Ex, with a number of pencil notations on the interior. 3) 1956 Brooklyn (vs. Yankees). Not scored. Ex. Yearbooks (10): 1-7) Brooklyn Dodgers complete run from 1951 through 1957. Averaging Vg-Ex. 8-10) New York Giants 1952, 1954, and 1955. Ex overall. Miscellaneous (6): 1) 1933 one-page typed letter, dated 11/29/33 on official Brooklyn Dodgers letterhead, from Bob Quinn to Larry MacPhail of the Cincinnati Reds discussing the split of gate receipts for a March 22, 1934, spring-training game. Vg-Ex, with normal mailing folds. 2-3) Two Brooklyn Dodgers roster booklets: 1942 (Vg-Ex) and 1944 (Vg-Ex). 4) 1949 Brooklyn Dodgers testimonial dinner program, issued in honor of the 1916 club. The dinner was held at the St. George Hotel on October 7, 1949, which was the date of Game 3 of the World Series, won by the Yankees (over Brooklyn) by a score of 4-3. Vg-Ex. 5) 1957 Brooklyn Dodgers ticket brochure (unfolds to show diagram of Ebbets Field seating chart and prices). Ex. 6) 1949 Brooklyn Dodgers schedule card. One side lists the Dodgers home games for the 1949 season, while the other provides the club's address, telephone number, and directions to Ebbets Field. Ex-Mt. Total: 39 items. Reserve $1,000. Estimate (open). SOLD FOR $2,666