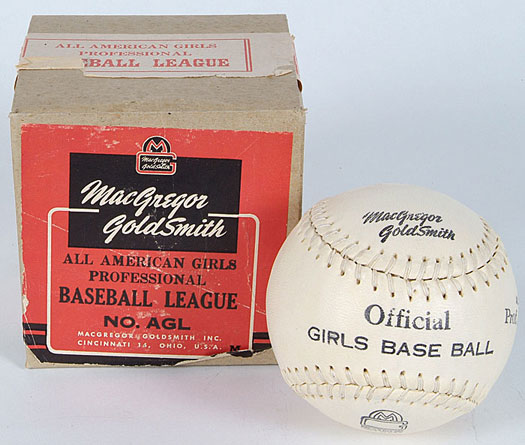 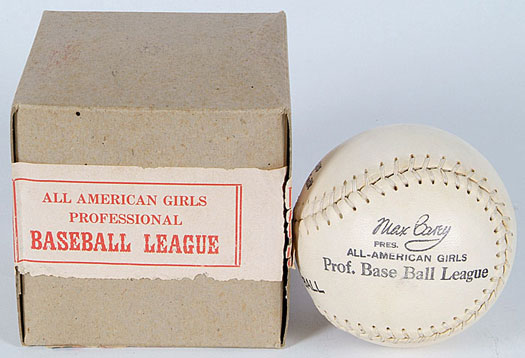 Exceedingly rare one-year-only style official All American Girls Professional Baseball League ball, measuring 10-3/8 inches in circumference, produced by MacGregor Goldsmith for use during the 1948 season. Together with its original box. The facsimile signature of Hall of Fame outfielder Max Carey appears on a side panel in his capacity as president of the league. According to the official web site of the AAGPBL (http://www.aagpbl.org/), the 10 3/8-inch circumference ball was only used in league play during the 1948 season. At the time, this was the smallest ball ever used in the AAGPBL and its introduction was related to the new pitching rule established that year that allowed for an overhand delivery. Prior to the 1948 season only underhand or side-arm pitching was allowed and the balls varied in size between 12 and 11 inches in circumference. After the 1948 season the ball size was once again changed, to 10 inches in circumference, and it remained that size until 1953, when it was reduced once again to 9 inches for the league's final two seasons. This is an exceedingly rare ball and its remarkable state of preservation, coupled with the fact that it is also accompanied by its original box, makes it possibly the finest example extant. The ball is in spectacular Near Mint condition and the box (EX) retains nearly all of its original paper labels, with no tears to any of the flaps.
The All American Girls Professional Baseball League (AAGPBL), which was immortalized in the classic baseball film A League of Their Own , was formed in 1943 and remained in operation until 1954. The league was the brainchild of Philip Wrigley, chewing gum magnate and owner of the Chicago Cubs, who was searching for an alternative to men's professional baseball after the sport lost so many players to the war effort. The league was originally formed as a nonprofit organization and began play in 1943 with teams in four Midwest cities: Racine and Knosha Wisconsin; Rockford, Illinois; and South Bend, Indiana. Popular with fans, the league operated successfully for a number of years even after the war ended. Today, the league's history serves as the focal point of the Baseball Hall of Fame's permanent exhibit Women In Baseball . This is both a rare and historically important artifact relating to one of the most interesting chapters in baseball history. Reserve $400. Estimate $800/$1,200. SOLD FOR $593