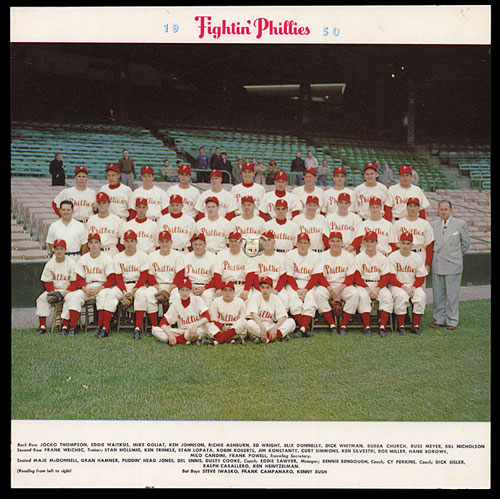 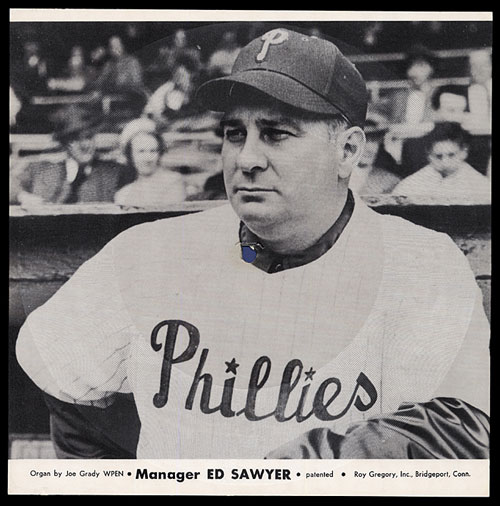 Philadelphia's fabled "Whiz Kids" are featured on this exceedingly rare promotional piece issued by Philadelphia radio station WPEN in 1950. The square, vinyl card features a color team photo of the 1950 Philadelphia Phillies on the front, while the reverse displays a black-and-white image of manager Ed Sawyer. While it has the appearance of a remarkably high quality card, what makes this item unique is that the reverse is actually a 45 rpm record that plays a rousing organ rendition of the club's fight song: "Fightin Phillies." This is the first example of this rare promotional piece we have ever seen, let alone handled, and represents an tremendous opportunity for any die-hard Phillies collector. REA's roots are in the Philadelphia, and in all our many years there during the early days of organized collecting and attending countless Philadelphia area shows, we never saw this item. Our consignor is one of the most knowledgeable and advanced Phillies collectors to ever live, and has been around even longer than we have (which is really saying something). During his forty-five years of collecting, he has seen exactly two, and he has both of them, hence the consignment of this example. We don't know what this item is worth, we can't look up other auction results, and we realize it is far too rare to be on the radar of even the most advanced collectors, so all we can do is present and document this unusual prize, give it what we think is a very modest reserve, and note: we really like it! 1950, of course, was a magical season in Phillies history, as the club, dubbed the "Whiz Kids" for its youthful roster, managed to capture its first pennant since 1915. Unfortunately, youth gave way to experience in the World Series in the form of the powerful New York Yankees, who swept the Phillies in four straight games. The card (8 x 8 inches) is in Excellent to Mint condition. Reserve $100. Estimate (open). SOLD FOR $237