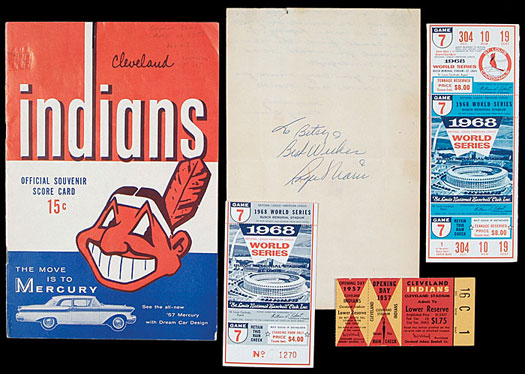 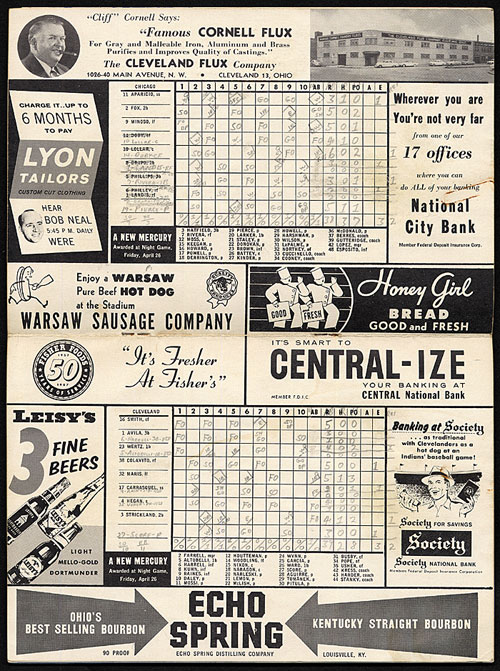 This collection commemorates Roger Maris' first and last game in the major leagues and is comprised of a program and three tickets. Also included is a vintage Maris autograph written on the back of a fan letter. 1-2) Program and ticket stub from Roger Maris' official major league debut with the Cleveland Indians in a game against the Chicago White Sox at Cleveland Stadium on April 16, 1957. The twenty-page program (6 x 9 inches) is neatly scored in pencil to record a 3-2 White Sox win in eleven innings. As noted here, Maris had three hits in five at bats in his debut. The program displays a few pencil notations on the cover and is in Excellent condition. The ticket stub (4 x 2 inches) is labeled "Opening Day 1957" and is for a "Lower Reserve" seat. In Excellent condition. 3-4) Two tickets, one full and one stub, to Game 7 of the 1968 World Series between the St. Louis Cardinals and Detroit Tigers, held at Busch Stadium on October 10th. This game represented Maris' final major league game. Unfortunately, Maris went hitless in three at bats in the club's 4-1 loss. The full ticket (2.75 x 6.75 inches) and stub (2,75 x 4.75 inches), which is for "Standing Room Only," are each in Excellent to Mint condition. Accompanying the program and three tickets is a two-page handwritten letter (on a fold-over sheet of unlined paper) from a young girl requesting Maris' autograph. Maris has kindly obliged on the reverse by writing "To Betsy/Best Wishes/Roger Maris," in blue ink (grading "10"). Although undated, the letter was most likely written in 1963, because she mentions receiving Maris' book, Roger Maris at Bat , as a Christmas gift that past winter. The book was published in 1962. The letter (5.5 x 8.5 inches) displays tape residue on the front and a number of mailing folds. In Very Good condition overall. Total: 5 items (program, 3 tickets, and letter). LOA from James Spence/JSA. Reserve $300. Estimate (open). SOLD FOR $593