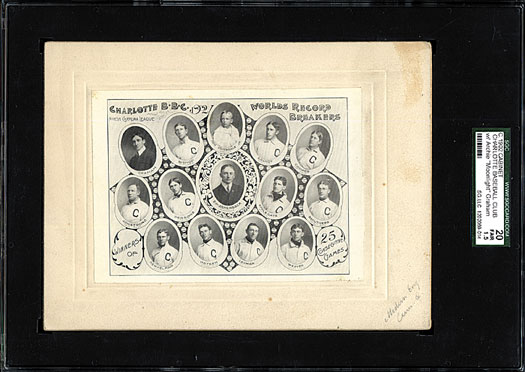 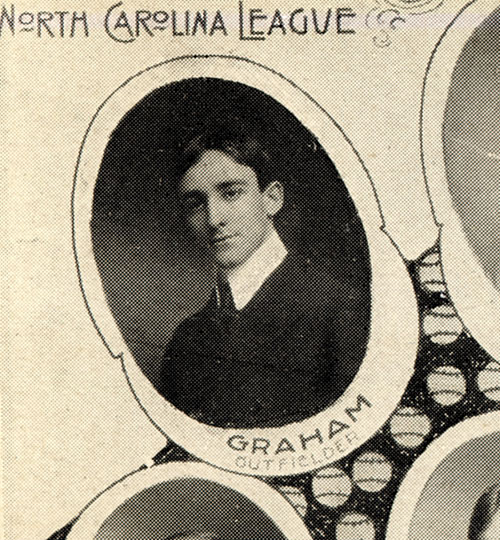 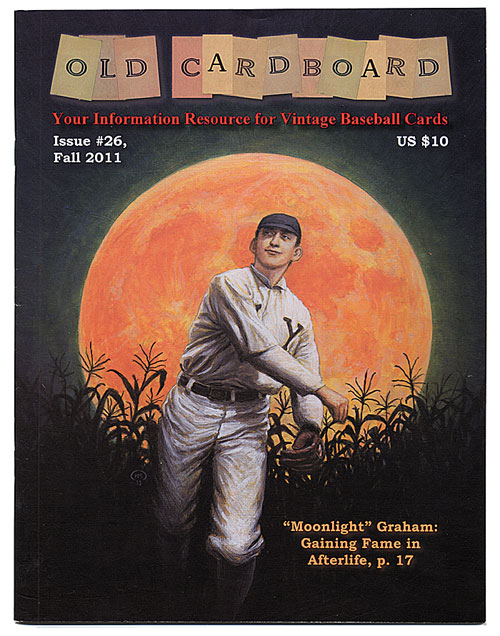 Rare team cabinet of the 1902 Charlotte Base Ball Club, of the North Carolina League, picturing portrait images of fourteen team members, including Archibald "Moonlight" Graham, who is seen in the upper left. All of the players are identified in print below their respective images. This is one of only two known examples of this exquisite team cabinet. While the 1902 Charlotte club is famous in its own right, having won a record twenty-five consecutive games that season (duly noted on the cabinet), the value of this piece is predicated solely upon the inclusion of "Moonlight" Graham, who, interestingly, is the only player not pictured in uniform. The name "Moonlight" Graham today is nearly as well known as that of Babe Ruth, Mickey Mantle, or Joe DiMaggio, but for different reasons. Graham only appeared in one Major League game and by virtue of that fact he played an integral role in the book Shoeless Joe , a work of fiction written by W. P. Kinsella in 1982, thereby securing a unique place in the baseball literature, and popular culture. While the book was well received by critics, it wasn't until it was adapted to the big screen in 1987, under the title Field of Dreams , that "Moonlight" Graham truly became immortalized. Although much has been written about "Moonlight" Graham since that time, many people are still surprised to learn that he was indeed a real person. Author W. P. Kinsella happened to see his name while flipping through The Baseball Encyclopedia in 1975 and the unusual circumstances of his Major League career (just one game, with no at bats, in 1905) were later used as a major plot device in his book. While some liberties were taken in the movie, the story of "Moonlight" Graham, as told on film, is basically accurate. He did only appear once in a Major League game, as a New York Giant, but that appearance took place in midseason, not in the last game of the year as told in the movie. Also, Graham did not quit ball right after his brief appearance and enroll in medical school. He continued to play minor-league ball while working towards his medical degree at the University of Maryland, and was even a member of the school baseball team in 1904 and 1905. He received his medical degree in 1908 and after one more summer of professional baseball he moved to Chisholm, Minnesota, where he practiced medicine for the remainder of his life .

As noted earlier, this is one of only two known examples of this team cabinet. The other example, which is in lesser condition, was just recently featured in the Fall 2011 issue of Old Cardboard , where it was used to illustrate an article written by Joseph Kemmett in which he attempts to document the existing photographic record of Graham as a ballplayer (only five items are listed; we know of one other). The offered cabinet has been graded 20 Fair by SGC; however, that technically accurate grade reflects almost entirely on the condition of the mount, not the composite photo, which offers remarkable clarity and presents as Excellent to Mint. The mount (7.75 x 5.75 inches) displays minor staining along the top right quadrant, as well as light foxing and minor corner wear. The name of the publisher, "Modern Eng./Cinc. O.," is written in pencil in the lower right corner of the mount. The same credit appears in the lower right of the composite photo. This is one of the finest of the very few "Moonlight" Graham photos in existence and the first example of this important team cabinet we have ever seen offered at auction. It is also important to note that this is not only an exceptional baseball photo, but one with tremendous crossover appeal as well, with great significance to American literature, folklore, and popular culture. A copy of the Fall 2011 issue of Old Cardboard accompanies the cabinet. Reserve $500. Estimate (open). SOLD FOR $1,778