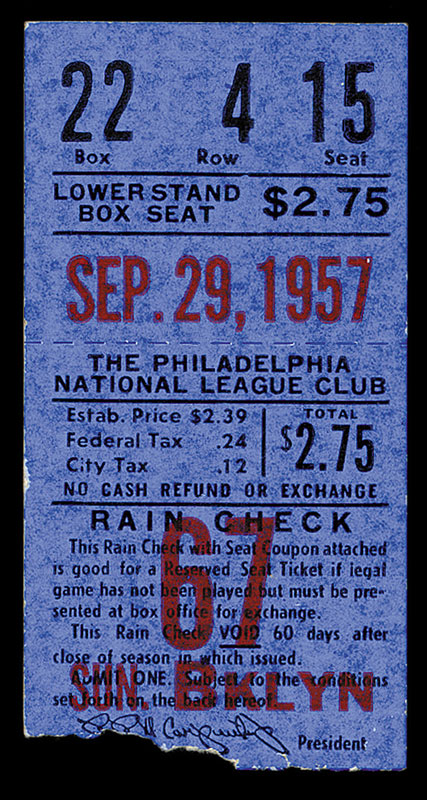 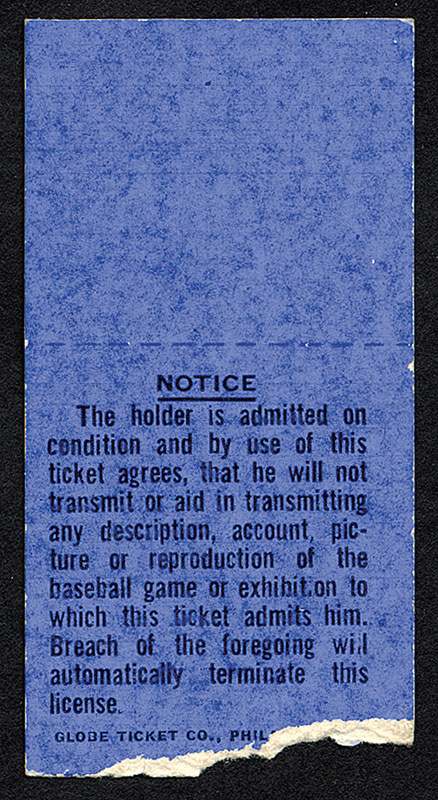 This ticket commemorates the end of an era. On September 29, 1957, the Brooklyn Dodgers took the field for the very last time in a game against the Philadelphia Phillies at Connie Mack Stadium in Philadelphia. Only 9,886 fans were in attendance that day to watch the Dodgers go down in defeat to the Phillies by a score of 2-1. As a side note, the last pitch ever thrown by a Brooklyn Dodgers pitcher was hurled by young southpaw by the name of Sandy Koufax, who entered the game in the eighth in relief of starter Roger Craig. Offered here is an extremely rare ticket stub from that historic game. The blue ticket, which is for a lower-stand box seat, features the date "Sep. 29, 1957," the day, "Sun," and the opponent, "Bklyn." While tickets from the last game played at Ebbets Field in 1957 are known, this is the first example from the Brooklyn Dodgers' final game of the 1957 season in Philadelphia that we have ever seen. Given the nature of ticket stubs and the small attendance that day, it's not surprising that very few have survived. This is both an exceedingly rare and significant piece of Brooklyn Dodgers history that is probably missing from even the most advanced ticket and Brooklyn Dodgers collections. The stub (3 x 1.5 inches) remains in Excellent condition. Reserve $100. Estimate (open). SOLD FOR $1,304