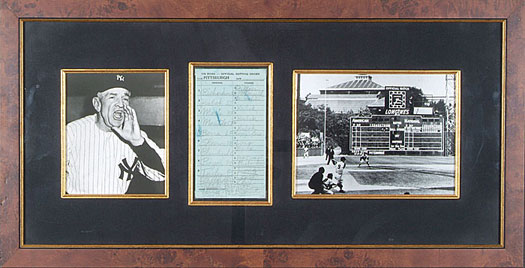 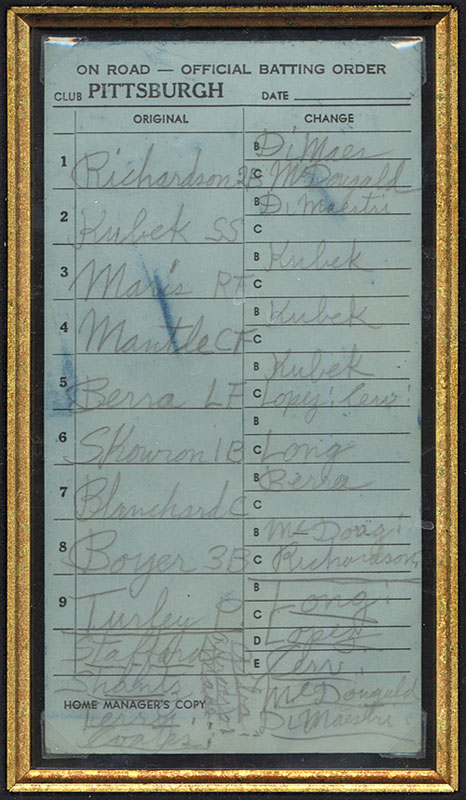 The seventh game of the 1960 World Series between the New York Yankees and Pittsburgh Pirates, which ended on Bill Mazeroski's ninth-inning walk-off home run, is considered by many to be the most exciting Game 7 in postseason history. Offered here is the official New York Yankees lineup card, filled out entirely in manager Casey Stengel's hand, that documents Stengel's every move during that fateful contest. This lineup card originates directly from Stengel's estate and is accompanied by an LOA from the daughter of Stengel's longtime caretaker, who was left many of Stengel's possessions following his death in 1975. It was originally sold at public auction in 2005 (realizing a final sale price of $5,377), along with a voluminous amount of Stengel material, all originating from his caretaker, including caps, pants, contracts, jewelry, team-signed balls, thousands of documents and letters, awards, additional lineup cards, programs, and many other personal items. The blue lineup card, which was issued at Pittsburgh, as noted in print at the top, is filled out in pencil and lists the Yankees' starting lineup for Game 7: Richardson, Kubek, Maris, Mantle, Berra, Skowron, Blanchard, Boyer, and Turley. Below Turley's name are the list of pitchers Stengel had available to him that day, and they are listed almost in the order that he used them: Stafford, Shantz, Terry, Coates, (and then sideways because he ran out of room) Grba, Arroyo, and Maas. To the left of the starting lineup, in the column marked changes, he has listed all of the possible position changes available to him should he need to pinch hit or make a double-switch with the pitcher. And changes were definitely needed. Stengel went through six pitchers and made three lineup substitutions as the game seesawed back and forth. The Pirates scored two in the first and two in the second to take a quick lead. The Yankees answered back with one in the fifth and four in the sixth to go ahead. They then added another two in the eighth to take a 7-4 lead, only to see the Pirates score five in the bottom half of the frame to go up by two. As expected in a game like this, the Yankees rallied to tie it with another two runs in their half of the ninth, setting the stage for Mazeroski's dramatic leadoff home run off of Bill Terry in the bottom of the ninth to give the Pirates their first World Championship since 1925. This a historically significant artifact from that memorable game, with outstanding provenance, and one of the few original World Series lineup cards we have ever seen offered at public auction. Equally significant is the fact that it is the last New York Yankees lineup card ever filled out by "The Old Professor" because he was unceremoniously fired by the club shortly after the Series. The card (3.75 x 6.75 inches) displays a few minor carbon stains (this was the top sheet of the lineup card, with carbon sheets below for the other team, umpire, and official scorer) and is in Excellent condition overall. Mounted (by means of photo corners) together with a recent print of Stengel and of Mazeroski hitting the game-winning home run in Game 7. Total dimensions: 28 x 14.5 inches. LOA from James Spence/JSA. Reserve $1,000. Estimate (open). SOLD FOR $2,370