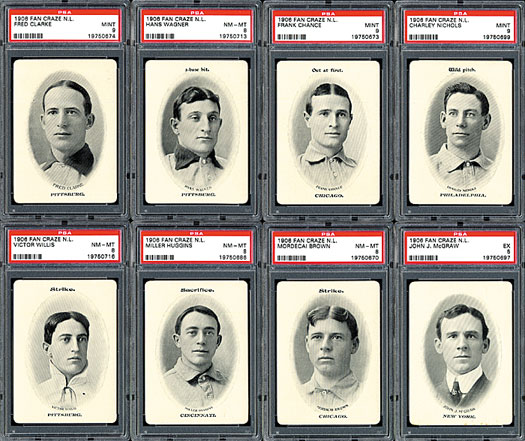 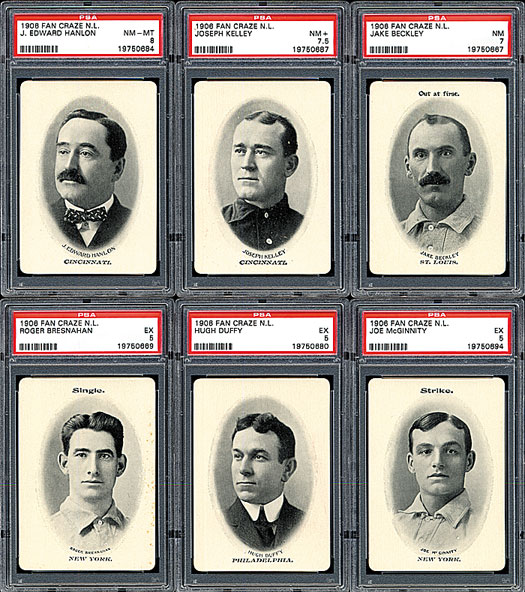 Presented is a newly discovered and exceptional high-grade Fan Craze complete set (minus two), comprised of fifty-two of the fifty-four player cards plus two different header cards, three "How to Score" cards (#1, 2, and 8), rules, original box, and game board. Missing only Overall and Pfeffer for completion. This set is new to the hobby, having been recently discovered among family keepsakes by a noncollecting family in the state of Virginia. The game had apparently been purchased by a relative in the year of issue and has obviously never been played with and has remained virtually unhandled, though somehow two cards have been lost over the years. The entire game, including the box, instructions, and all the cards, have been left totally undisturbed for the past 106 years. This set looks today exactly as it did when purchased in 1906 and was carefully stored away! This near set of 52 playing cards feature what many collectors consider the finest portrait poses of turn-of-the-century ballplayers ever produced on baseball cards. Issued in 1906 by the Fan Craze Company of Cincinnati, these cards were designed as a deck of baseball-game playing cards. Fourteen Hall of Famers are represented: Honus Wagner, Beckley, Bresnahan, Brown, Chance, Clarke, Duffy, Hanlon, Huggins, Kelley, McGraw, McGinnity, Nichols, and Willis. Also included is National League President Harry Pulliam. The Fan Craze set has a special significance to collectors, as it is one of the few sets issued in the earliest years of the twentieth century, and the set includes many players who appear in no other card sets. Because of its year of issue, it is also one of the few sets which include a blend of 1910-era stars along with players who made their mark in the nineteenth century, such as Kid Nichols, Joe Kelley, and Jake Beckley, who in 1906 were just winding down their playing careers. All fifty-two player cards have been PSA graded (all submitted by REA). The PSA grades are as follows: Eight MINT 9: Casey, Chance (HOF), Clarke (HOF), Leach, Nichols (HOF), O'Neil, Pulliam, and Seymour. Five NM-MT+ 8.5: Dunleavy, Fraser, Lundgren, Sheckard, and I. Young. Twenty-one NM-MT 8: Beaumont, Brown (HOF), Browne, Corcoran, Dooin, Doolin, Ewing, Hanlon (HOF), Howard, Huggins (HOF), Kling, Lumley, Phillippe, Ruelbach, J. Taylor, Tenney, Theilman, Wagner (HOF), Weimer, Wicker, and Willis (HOF). One NM+ 7.5: Kelley (HOF). Five NM 7: Beckley (HOF), Bergen, Donlin, McIntyre, and Thomas. Three EX-MT 6: Ames, Maloney, and McGann. Eight EX 5: Bresnahan (HOF), Dahlen, Duffy (HOF), McGinnity (HOF), McGraw (HOF), Pittinger, L. Taylor, and Wiltsie. One VG-EX+ 4.5: Ritchey. The original box is complete, in overall Good condition. The game board is in Ex-Mt condition. This is a stunning and very consistent high-grade set (minus two) that represents an outstanding value, compared to an even higher-grade set and perhaps compared to all other 1910-era baseball sets as well. The current SMR value for the assigned grades is $13,868. Total: 57 cards. Reserve $2,500. Estimate $5,000++. SOLD FOR $9,480