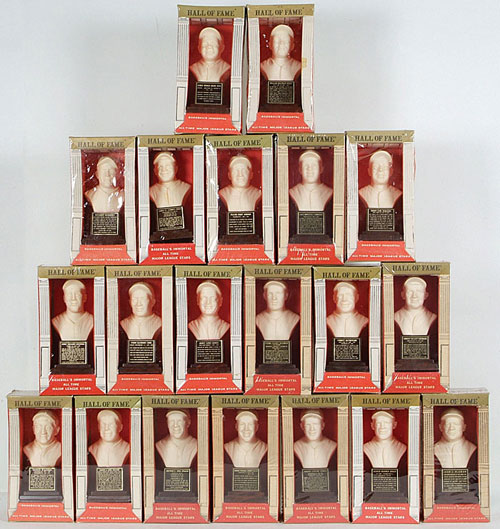 Extraordinary ultra high-grade, Mint-In-Box collection of all twenty 1963 Hall of Fame busts. These attractive display pieces, produced by Sports "Hall of Fame," Inc. (the official licensee of the National Baseball Hall of Fame), feature a white, bust-length image of the respective player rendered in plastic and mounted upon an imitation-wood plastic base. Displayed upon each base is a plaque listing the player's career highlights. Each figure (height: 6 inches) is still in its original packaging, a red, white, and gold box (4 x 3 x 8.5 inches), the reverse of which features portrait images of all twenty offered players in the set: Ruth, DiMaggio, Cobb, Gehrig, Hornsby, Wagner, Traynor, Dickey, W. Johnson, Mathewson, J. Robinson, Greenberg, Sisler, Cochrane, Speaker, Feller, Cronin, Foxx, McGraw, and P. Waner. Although the text on the reverse makes note of "Many More" to come, these twenty were the only ones ever issued. When sold in 1963, each box was covered in cellophane. The DiMaggio and Johnson boxes display large tears to the cellophane, with the cellophane on the Johnson box having been repaired with clear tape along the side. The Dickey box, while free of any significant tears to the cellophane, displays a small area of adhesive residue on the right front panel. The remainder of the boxes display only one or two very tiny insignificant tears to the cellophane, which, given the fragile nature of the material and its age, is expected. All of the busts are in perfect Mint condition. This is the finest set of these statues that we have ever offered. Normally, these boxes are found with major tears to the cellophane and subsequent toning to the statues from exposure to the elements. Also, none of these boxes display price tags or the names of the players written in marker on the base, which is another very commonly found flaw. It should be noted that these busts were not all issued at the same time or in the same quantity; some of these Hall of Fame busts are particularly rare, making sets extremely difficult to assemble. The Hall of Fame busts were originally sold in Cooperstown, but apparently were not a particularly successful line. Somehow the entire remaining stock wound up at Manny's Baseball Land, the souvenir store located across the street from Yankee Stadium. The Manny's stock had a very poor distribution, with only six or eight different players represented, and most of the Hall of Fame busts in original boxes that have survived in the hobby today originate from Manny's. This is an exceptionally rare, extraordinary complete set of these attractive display pieces, each still housed in its original retail box. Total 20 statues. Reserve $500. Estimate $2,000++. SOLD FOR $2,370