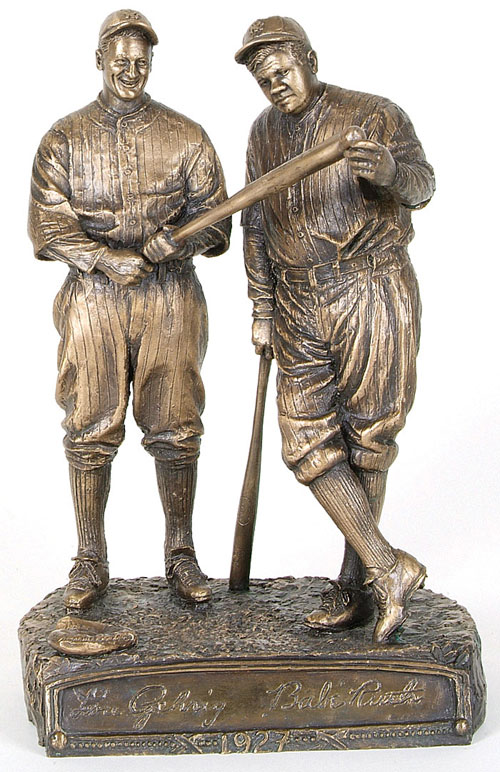 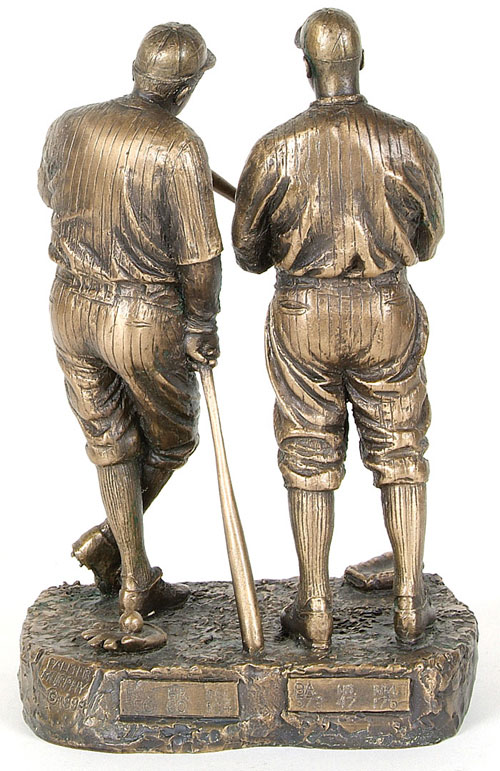 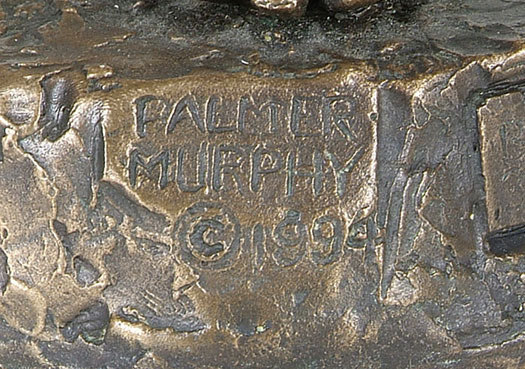 This rare one-of-a-kind piece represents the very first bronze statue of Babe Ruth and Lou Gehrig ever created by renowned artist Palmer Murphy in 1994. Many collectors are familiar with limited-edition Babe Ruth and Lou Gehrig bronze statues created by Murphy in 1999 (issued in 2000), for they are considered one of the finest artistic representations of the legendary duo ever produced. (Robert Edward Auction offered a rare artist's proof from that edition as Lot 1291 in our May 2008 auction, where it realized a final sales price of $4,406.) The offered piece should not be confused with that later edition! This piece was created by Murphy in 1994 as a "one of one," with no thought towards future reproduction, plus it differs in many significant ways from Murphy's limited-edition statue issued in 2000.
Murphy began this original sculpture as a wax figure in 1993, constantly honing and sharpening the detail over many months. When finally satisfied with likeness of each player, as well as the details regarding the uniforms, Murphy took his wax figure to the Sculpture House Castings foundry in NYC for the transformation to solid bronze. Unlike all other versions in existence, this was the only one produced in "hot cast" solid bronze, using the "lost wax process," which insured that no other examples could be made. Murphy's works are known for their extraordinary exactitude with regard to even the tiniest details, and this piece is no exception. Here, he faithfully reproduces the club's home 45tripe uniforms (the limited-edition examples picture them in road uniforms), with each cap featuring the club's famous "NY" logo. The pose depicts Babe Ruth inspecting Lou Gehrig's bat, with even the Louisville Slugger center brand on the bat faithfully reproduced. At the feet of the players are representations of their respective gloves, with a baseball resting in Ruth's. An inscribed plaque displaying each player's career stats appears on the reverse of the base. Also located on the reverse of the base, in the left corner, are Murphy's signature and the copyright date ("Palmer Murphy 1994").

We actually spoke to Palmer Murphy regarding this bronze and he has confirmed its history, significance, and status as a one-of-a-kind piece. He recalls the piece going to a private collector around 1996 and then lost track of its whereabouts. Our consignor purchased this bronze at an estate sale of a fine-art foundry in Conway, Missouri, in 2002. It has been in his private collection since then and has never been publicly shown or auctioned since the day Palmer Murphy originally created it. Given the exceptional display quality of this piece, it is not surprising that Murphy returned to the design in 1999, when he decided to produce a special limited-edition Babe Ruth bronze in honor of the 100th anniversary of Babe Ruth's birth. Although this is a modern work, Murphy has crafted the piece in the tradition of classic baseball figural art of the nineteenth century and it is rare to see a figural work of such uncompromising quality and high-production values today. Murphy is best known for his bronze statues, and his work has been displayed at both the Baseball Hall of Fame in Cooperstown and at the Babe Ruth Museum in Baltimore. This is perhaps Murphy's finest work and the one that in many ways started him on his career as a sculptor of collectible fine art. Height: 9 inches. Base: 4 x 6 inches. Weight: 10 pounds. On the underside of the base are screw attachment holes, for future mounting on a wood or marble base. Reserve $2,500. Estimate (open). SOLD FOR $0