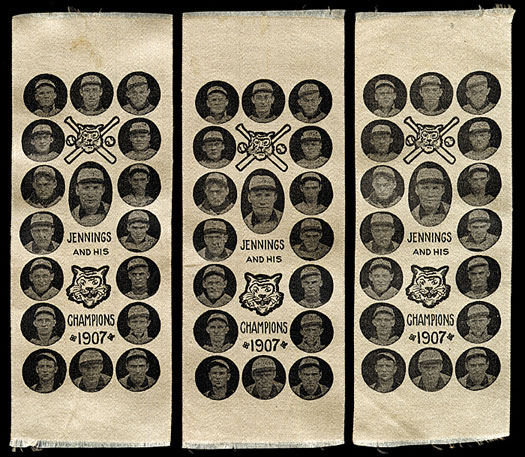 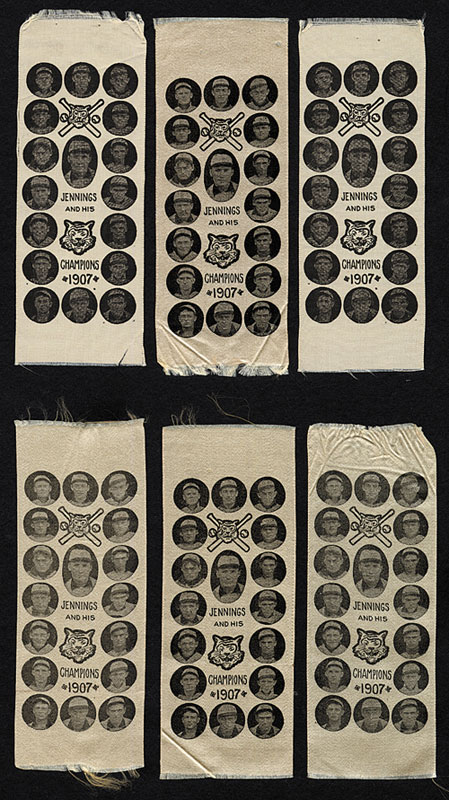 Collection of nine identical souvenir silks issued to commemorate the 1907 Detroit Tigers, champions of the American League. Each small rectangular silk features portrait photos of seventeen team members, including manager Hughie Jennings, Ty Cobb, Sam Crawford, "Wild Bill" Donovan, George Mullin, Ed Killian, Germany Schaefer, Davey Jones, and Boss Schmidt. The caption "Jennings and His Champions 1907" appears in the center of the design, as do two "tiger" caricatures and a bat-and-ball motif. 1907 was Ty Cobb's second full season in the Major Leagues. Although only twenty-one years old, Cobb flashed the brilliance that would distinguish him as one of the game's greatest players. The fabled "Georgia Peach" captured his first of nine consecutive batting titles (.350) and also led the league in RBI (119), hits (212), stolen bases (49), and slugging percentage (.473). Those lofty numbers helped lead the Tigers to their first of three consecutive pennants. Unfortunately, the Tigers were swept by the Cubs in the World Series (one game ended in a tie). Silks such as this were traditionally used as bookmarks or to be worn pinned to coats and in their heyday (1840s to 1920s) were more commonly seen with designs showing support for a political candidate. Baseball silks are very rare and unusual. The 1907 Detroit Tigers team silk is one of the few great examples of this type of collectible in the world of vintage baseball collectibles, and has long been recognized as a very desirable, rare, and unusual collectible relating to the 1907 Tigers (though, being silks, not fitting perfectly into a popular discipline of collecting such as cards or 45). This collection of nine examples represents an extraordinarily unusual find of these overlooked rarities, recently discovered by accident by a noncollector who rather than piecing them out one at a time has decided to sell all as a collection at one time. This find easily represents the single largest offering of these silks we have ever seen (we're not sure if we've seen nine examples in total over the past forty years) and presents a very unusual, perhaps unique, collecting, dealing, or investment opportunity. Grading silks is difficult, as condition issues affecting them - mostly to toning, fraying, and minor flaws - are different than those taken into account when grading cards. We grade these as follows: two are Ex, four are Vg-Ex, and three are Gd. Total: 9 silks. Reserve $1,000. Estimate (open). SOLD FOR $3,851