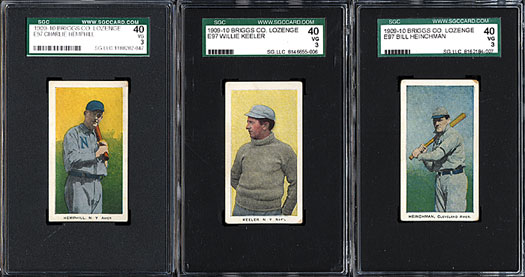 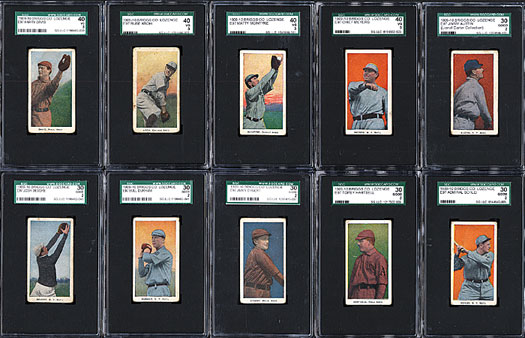 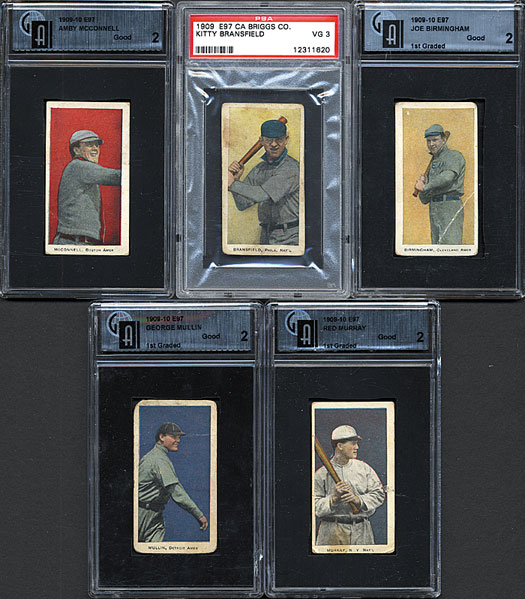 Rarely seen near-complete set of E97 C. A. Briggs Co. consists of twenty-seven of the thirty cards in the set plus one variation for a total of twenty-eight cards. Missing only the following three cards for completion: Doolan, Kelly, and Young. Each card has been graded and encapsulated by SGC (except one PSA and four GAI). The E97 set is very difficult to find compared to many other "E" card sets. This 30-card set was issued in 1909-1910 by the C. A. Briggs Co., Lozenge Makers of Boston, Mass. This set is closely related to several other candy sets from the era, which share the same format, and, in many cases, the same player image. The cards are very similar in design to their E93 counterparts and can most easily be distinguished by the attractive brown-printed checklist of the complete set and the advertisement for "C. A. Briggs Co., Lozenge Makers, Boston, Mass." along the bottom on the reverse of each card. As is the case with most 1910-era tobacco and â€œEâ€ card issues, E97 C. A. Briggs Company cards each measure approximately 1.5 x 2.75 inches. The variation included is Steinfeldt, who is represented by two cards (name spelled with and without the "t"). SGC grading composite: Eight VG 40: Bransfield (PSA VG 3), Davis, Heinchman, Hemphill, Willie Keeler (HOF), Kroh, McIntyre, and Meyers. Twelve GOOD 30: Austin (Lionel Carter Collection), Birmingham (GAI GOOD 2), Devore, Durham, Dygert, Hartsel, McConnell (GAI GOOD 2), Mullin (GAI GOOD 2), Murray (GAI GOOD 2), Schlei, Steinfeldt, and Sullivan (Chicago). Note: an exceedingly rare variation of Sullivan with Boston team designation exists and is not included. Five FAIR 20: Bradley, Camnitz, Kleinow, Nichols (Nicholls, Cleveland), and Rossman. Three POOR 10: Carrigan, Moore, and Steinfeld (missing "t"). The cards in this set are in very pleasing but circulated condition. This is typical for caramel cards in general, which of course were issued with candy, one card per pack, and which tend to survive in lesser condition than their more common tobacco-card counterparts. This is a very rarely offered near set of E97 Briggs Co., one of the most popular, elusive, and colorful of all â€œEâ€ card issues, that could serve as the foundation for the assembly of a very impressive mid-grade set. Total: 28 cards. Reserve $1,000. Estimate $2,000/$4,000+. SOLD FOR $4,444