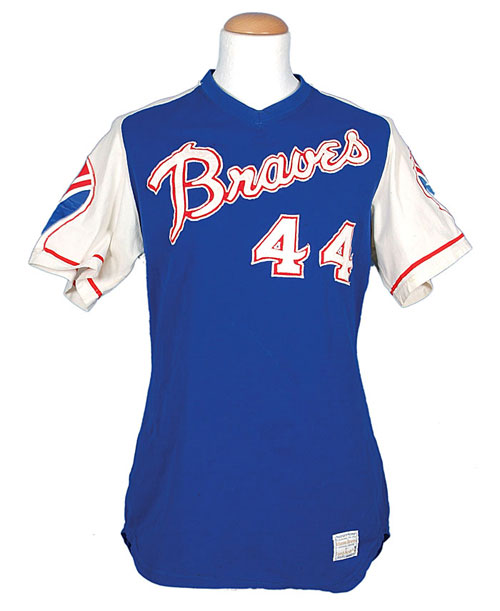 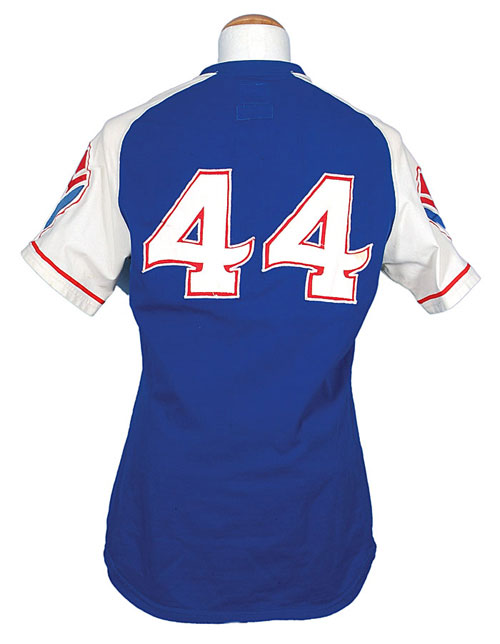 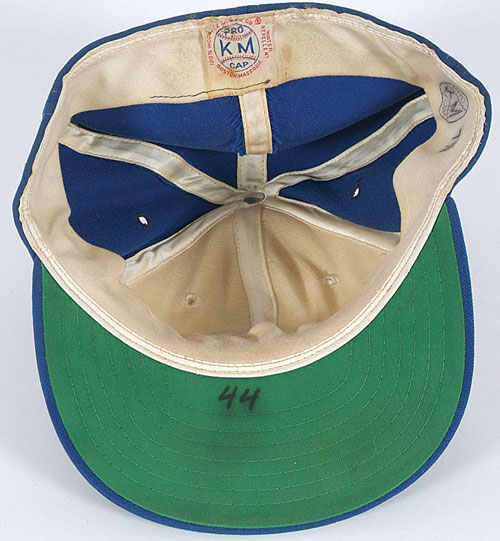 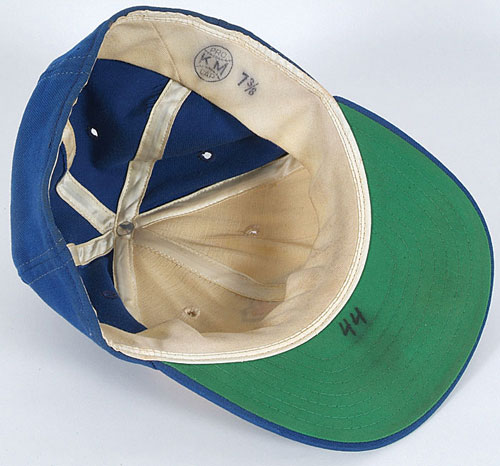 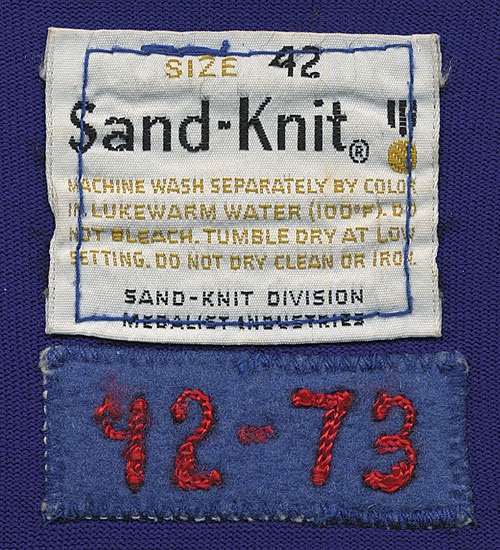 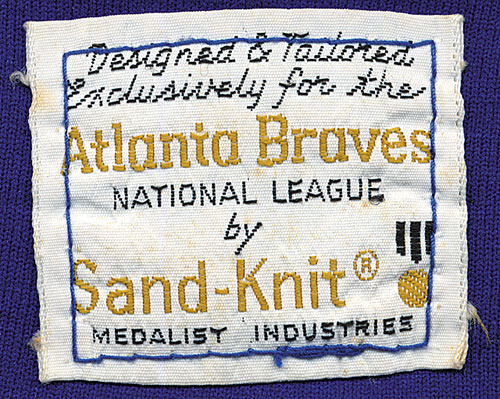 Atlanta Braves road uniform worn by Hank Aaron during the 1973 season. The blue-and-white knit jersey is lettered "Braves" across the front and features the number "44" on the left breast and reverse. All letters and numerals are appliquÃ©d in white-on-red-tackle twill (with white Swiss embroidered edging). The Braves "feather" emblem adorns each sleeve. Both the size and year ("42 - 73") are chain-stitched in red upon a blue strip tag located in the collar. Also in the collar, situated directly above the strip tag, is a "Sand-Knit 42" label. An additional Sand-Knit exclusivity tag, reading "Designed & Tailored Exclusively for the Atlanta Braves National League by Sand-Knit," appears on the left front tail. Original and unaltered, the jersey displays moderate wear, including a few small, light stains on both the front and reverse lettering and/or numerals, shoulders, and left sleeve. The jersey is accompanied by an Atlanta Braves pro-model cap, also dating from approximately 1973. It should be noted that this jersey and cap have a very special provenance: both originate directly from Joe Gerson. Gerson is a legend in his own right in the Georgia sporting world. He had a special relationship with both the Atlanta Braves and with Hank Aaron. Gerson, in addition to being a member of the Georgia Sports Hall of Fame, was the co-founder and first president of the Atlanta Braves 400 Club, the official fan club of the Atlanta Braves to this day. This jersey and cap were presented to him in the early 1970s and were his most prized personal possessions relating to Hank Aaron.

The white-and-blue wool cap features an embroidered red-white-and-blue "A" on the front and a "KM Pro" label at the rear of the cloth headband. Both the "KM Pro" logo and the size ("7 3/8") are stamped in blue on the right side of the headband. The number "44" is written on the underside of the brim in black marker. This style of cap was used by the Braves between the years 1972 and 1980. The cap displays moderate wear, including light soiling to both the interior and exterior.

According to world-renowned jersey expert David Bushing, the jersey is one of the very best Hank Aaron jerseys in the world on many counts: It is an extremely rare 1973 game-used jersey, one of the few early 1970s examples he has ever seen; it is a rare and popular Braves style; it is an extremely early knit style jersey (of special significance as this was only the second year of knits); it has an impeccable and significant provenance; and was worn during an extremely important season in which Aaron approached Ruth's record of 714 home runs, ending the season at 713. While Aaron hit milestone home-run number 700 against Philadelphia on July 21, 1973, in a home uniform (at Atlanta), he hit thirty-nine other home runs in 1973 in the march toward Ruth's record. Many were hit in away games, and some of these important home runs were almost certainly hit while wearing this very jersey.

1973 represented Hank Aaron's last great season. As the country stood witness to history in the making, Aaron took dead aim at Ruth's hallowed lifetime home-run mark. "Hammerin' Hank" entered the season just forty-one home runs shy of Ruth's mark of 714, and he kept baseball fans on the edge of their seats down the stretch, finishing the season with forty home runs, one shy of the record. Although he just missed tying Ruth's record, his forty home runs did help him set two others, one for himself and another for the team. At the age of thirty-nine he became the oldest player in the major leagues to hit forty or more home runs in a season. Additionally, his forty home runs also enabled the Braves to become the first team in history to feature three players (Aaron, Darrell Evans, and Davey Johnson) with forty or more home runs in a season. This is only the Hank Aaron 1973 Atlanta Braves jersey we have ever offered. It is also one of only a very few 1970s Aaron Braves jerseys we can recall seeing. This is an outstanding Aaron jersey, in all respects, dating to his last great season that left him one home run shy of immortality. Total: 2 items (jersey and cap). Reserve $2,500. Estimate (open).
SOLD FOR $17,775