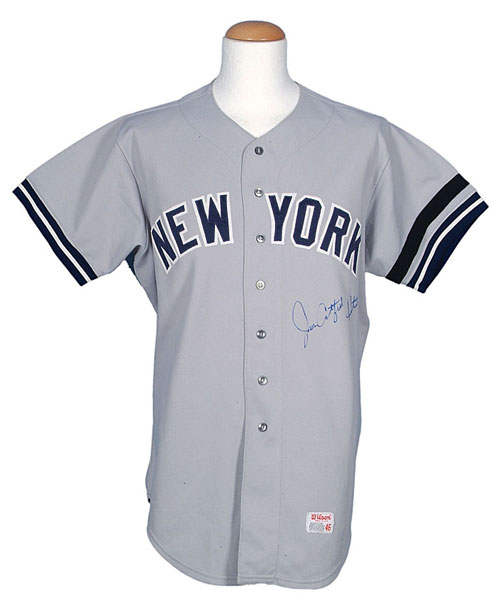 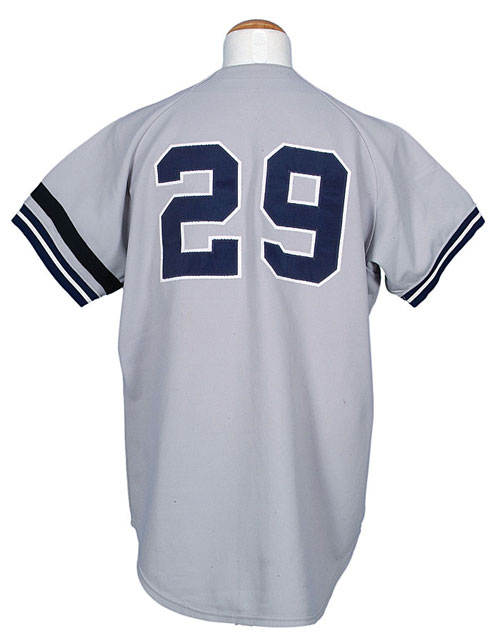 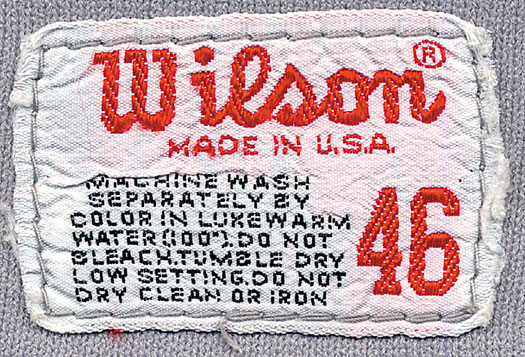 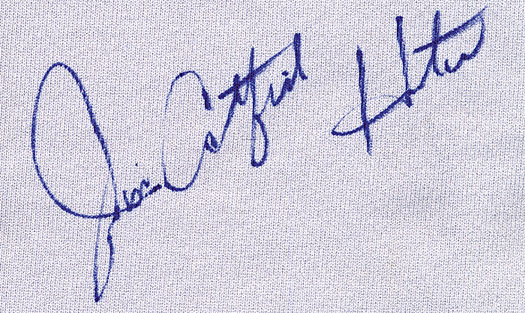 1979 New York Yankees road jersey worn by Hall of Fame pitcher Jim "Catfish" Hunter during the final season of his career. This jersey, by virtue of its dating from 1979, is obviously one of the last ever worn by Hunter, but the fact that it is a road example makes it all the more significant. Hunter's last appearance in a major league game took place in Cleveland, on September 17, 1979. Therefore, this may be the very last jersey ever worn by Hunter during his illustrious career. If we assume that players normally received two home and two road jerseys per season, then at the very least (as noted to us by jersey expert Dave Bushing) there is a fifty percent chance that the offered jersey is the very one worn by Hunter during his final start. While we have failed to find a photo of Hunter on that night that would allow for either a positive or negative photo match, perhaps future research will one day yield a conclusive answer. Hunter allowed five runs in six and a third innings against the Indians, but received no decision in the Yankees 6-5 loss. He also recorded the final two strikeouts of his career in the game. Hunter finished the season with a career-low two wins (against nine losses) and a career-high 5.31 ERA. Those uncharacteristic numbers were due in part to a number of health problems that began the following spring when Hunter was diagnosed with diabetes. In 1979 he also suffered a shoulder injury that limited his effectiveness for much of the season. Still, he always cited the desire to spend more time with his family as the overriding reason for his retirement at the end the year, and not his health. While we will never know how many more good years Hunter would have enjoyed had he chosen to keep playing, when it comes to judging his previous mound accomplishments, no such ambiguity exists. Between the years 1970 and 1976 there was probably no better pitcher in baseball than Catfish Hunter. In those seven season, Hunter won twenty or more games five times, including league-high win totals of 25 and 23, respectively, in 1974 and 1975. As the pitching ace of the Oakland Athletics from 1970 through 1974, he led the club to three consecutive World Championships (1972-1974) before signing as a free agent in 1975 with the Yankees. In New York he once again anchored a staff that produced three consecutive pennants and two World Championships (1977-1978). Hunter finished his fifteen-year career with 224 wins and a 3.26 ERA, and is one of only sixteen pitchers in baseball history to pitch a perfect game. He was elected to the Baseball Hall of Fame in 1987.

The gray knit jersey is lettered "New York" across the front and features the number "29" on the reverse. All letters and numerals are appliquÃ©d in navy on white tackle twill. Hunter's name, the year, and the set number ("Hunter 79 1") are chain-stitched in navy upon a gray strip tag in the collar. A "Wilson 46" tag is located on the left front tail. A black arm band, in memory of the death of Yankees captain Thurman Munson, who died tragically in a plane crash on August 2, 1979, appears on the left sleeve. Hunter has signed the jersey, "Jim Catfish Hunter," in blue Sharpie (grading "8/9") on the left breast. The jersey, which is original and unaltered, displays light-to-moderate wear. This is an outstanding Catfish Hunter jersey in all respects and one that has the possibility of also being the jersey worn by Hunter during his the final game of his career on September 17, 1979. LOA from James Spence/JSA. Reserve $2,500. Estimate (open). SOLD FOR $6,518