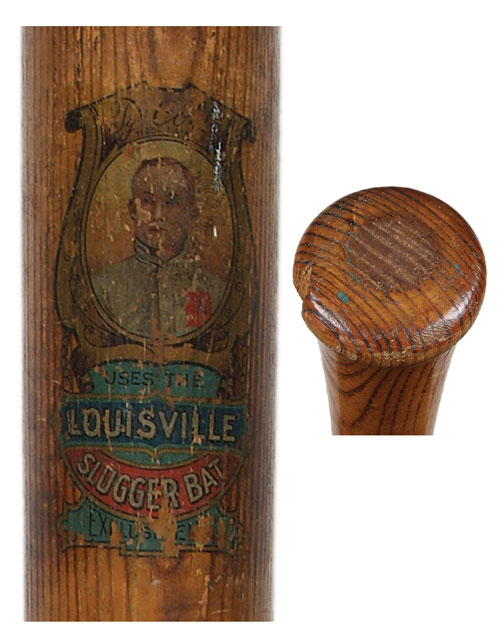 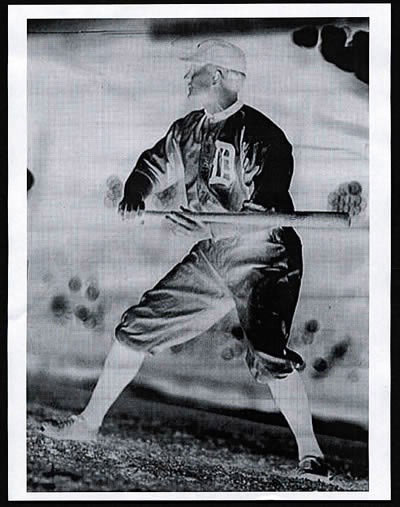 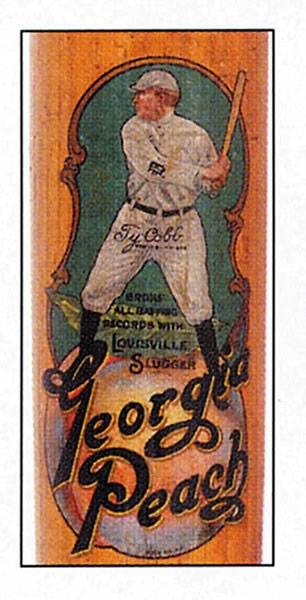 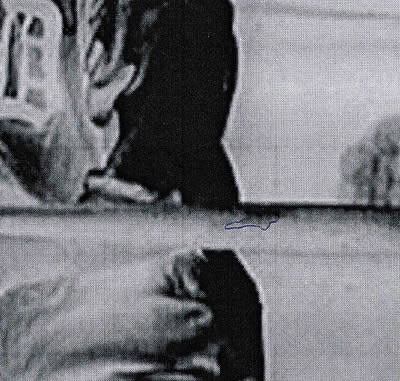 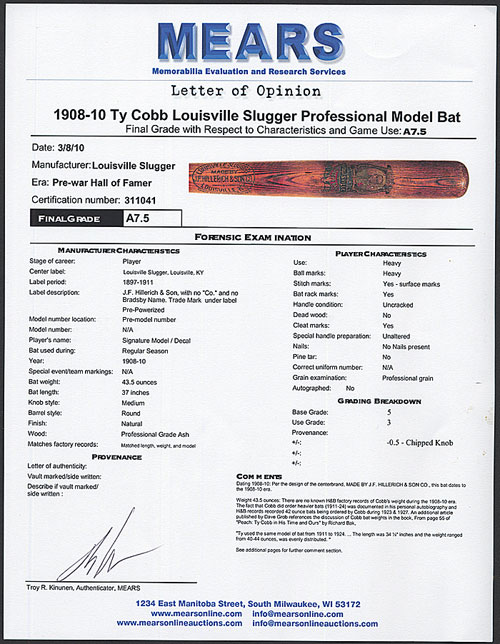 This extraordinary Ty Cobb decal bat, manufactured by J. F. Hillerich & Son, holds the special distinction of being one of the earliest Ty Cobb pro model bats extant. Graded A7.5 by MEARS and one of only a few 1908-era Ty Cobb J. F. Hillerich & Son bats listed in its database. This bat was originally introduced to the collecting community in Robert Edward Auctions' May 2010 sale, where it appeared as Lot 1717 and sold for $8,813. It has been consigned to this auction directly from the original purchaser, who is reorganizing his collection. The bat originates from a noncollector who received it many years ago from his grandfather, a former minor leaguer who played in the early 1900s. The bat remained in their family for nearly 100 years before being sold in 2010. This is a particularly exciting find due to its period of manufacture. While technically dating from the 1897-1911 labeling period, it can be more narrowly defined to the three-year period 1908-1910 based upon the center brand stamp and the fact that Cobb did not sign a Louisville Slugger endorsement contract until 1908. The bat displays a "dash-dot-dash" pattern within the J. F. Hillerich & Son center brand label and features a decal image of Cobb on the barrel. The colorful decal design incorporates both Cobb's portrait image and his facsimile signature, and is thus far more visually appealing than a later-era traditional signature-model Cobb game bat. Approximately 85% of the decal remains intact and both Cobb's signature and image are clearly visible. Below his image is the endorsement "[Cobb] Uses the Louisville Slugger Bat Exclusively."

Many collectors assume that only store-model bats were manufactured with decals, and are unaware that Major League players ever used bats with decals, or that pro-model bats with decals were ever even manufactured for player use; but that is, in fact, the case. Most bats with decals, of course, are store-model bats, which at a glance look very similar to a pro-model decal bat such as this. But this is where the similarity ends. This Ty Cobb game bat is actually very different, with both the H&B stampings and specifications (which are very different from that of the store-model decal bats) defining this bat with certainty as a professional-model bat manufactured exclusively for use by Ty Cobb. The bat, which dates to the 1908-1910 manufacturing period (predating model numbers), is hand-turned (a primary characteristic of pro-model bats that is not shared by store-model bats) and displays heavy use along the entire length in the form of ball marks, cleat marks, grain swelling, rack marks, and a small chip in the knob. The company stampings within the center brand are those of a professional-model Ty Cobb game-used bat, with the smaller of two "dash-dot-dash" symbols appearing below "Louisville Slugger," as opposed to "40 TC" as found on store-model bats. In addition, its length (37 inches) and weight (43.5 ounces) also fall within the parameters of acceptable specifications for Ty Cobb pro-model bats. (A more detailed analysis of the bat's length and weight is included in the accompanying MEARS LOA, which can be viewed in its entirety on our website.)

Collectors of decal store-model bats tend to primarily be interested in the display value of these bats, which is understandable, and usually have no knowledge of professional 42. When we first offered a Ty Cobb pro-model decal bat in our April 2007 auction (Lot 1307), one advanced store-model bat collector, who we checked with while researching the write-up, questioned the use of decal bats at all by Major Leaguers and challenged us to provide him with a photograph to prove this. Photographs from the dead-ball era of players batting that are taken at the proper angle, let alone with such clarity that any details at all of the barrel (even a name or signature) can be seen, are a tall order. HOWEVER, not only did we find a photograph, we found one of Ty Cobb! That action photograph of Cobb at the plate using a Ty Cobb decal bat is once again provided here. (Note: The bat Ty Cobb is using in this photograph is a batting-pose decal bat, as opposed to the offered bat, which is a portrait decal bat.) H&B produced several different designs of Ty Cobb H&B bat decals. For that reason we have also provided an image of a Ty Cobb batting-pose decal and additional photos (both a positive print and the original negative from which it was produced), as well as an inset image with the batting-pose decal on the bat outlined to allow for easy image-matching identification. While the Cobb photo was an amazing discovery, another photograph (circa 1902 to 1915) was later found capturing Roger Bresnahan using a decal bat. It is also interesting to note that the 1939 H&B catalog makes specific mention of Hank Gowdy having used a decal bat in the 1914 World Series. There is no doubt that professional-model decal bats were used by a number of Major League players during the dead-ball era, though it is also the case that this practice was limited to only a very few players who were under contract and whose images were used on decal store-model bats (a universe of only a dozen or so players), such as Ty Cobb, Honus Wagner, Roger Bresnahan, and Hank Gowdy. Lastly, it is also important to note that prior to 1916, there are no known H&B signature model bats of any player. For this era there are only a handful of block letter bats (manufactured only for non-contract players), which was another way to identify player-model bats, blank-barrel bats, and decal bats. There are no Cobb block-letter bats from this era, as he was under contract with Louisville Slugger starting in 1908. For this label period of 1908 through 1916, the decal bat was therefore the standard-style bat issued to Ty Cobb for Major League use.