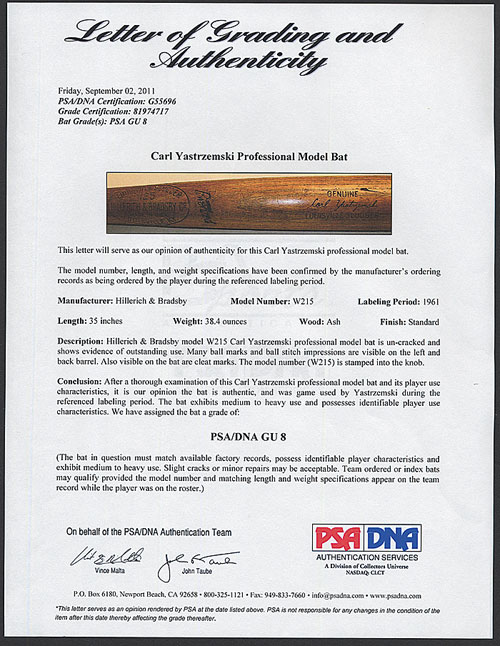 Rare Carl Yastrzemski H&B signature model "W215" bat dating from his 1961 rookie season with the Boston Red Sox. Graded GU8 by PSA/DNA. This is a remarkable Yastrzemski bat. Although this bat conforms to the 1961-1964 labeling period, it can be pinpointed precisely to the 1961 season based upon the H&B factory records, thus making it one of the finest and most desirable Yaz bats extant. The bat displays medium-to-heavy use, including numerous ball and stitch marks on the left and back barrel, and cleat marks. The model number "W215" is stamped in the knob. All of the center brand and barrel stampings are deep and well defined. Many rookies are often overwhelmed by their surroundings during their first year in the majors. That's natural. However, can anyone truly imagine how Carl Yastrzemski felt as he took his position in left field for the Boston Red Sox on opening day in 1961? Yastrzemski was given the unenviable task of replacing Ted Williams, who retired the previous season, and the pressure, by his own admission, affected his performance early on. Yaz was batting just .220 after the first three months and it was only after Ted Williams himself came to Boston and worked with him for three days, that he regained his confidence and turned his season around. Yaz batted .266 with 11 home runs and 80 RBI in his first season. Two years later he won the first of three batting titles and in 1967 captured the Triple Crown by virtue of his league-leading 44 home runs, 121 RBI, and .326 average. Yastrzemski finished his career with 3,419 hits (8th all time), 452 home runs, 1,844 RBI (13th all time), and a .285 lifetime average. He also retired as the American League leader in games played with 3,308. He was elected to the Hall of Fame in 1989. This is the first Carl Yastrzemski pro-model bat we have ever seen that can be conclusively dated to his 1961 rookie season. Length: 35 inches. Weight: 38.4 ounces. LOA from John Taube and Vince Malta of PSA/DNA. Reserve $500. Estimate $1,500+. SOLD FOR $4,148