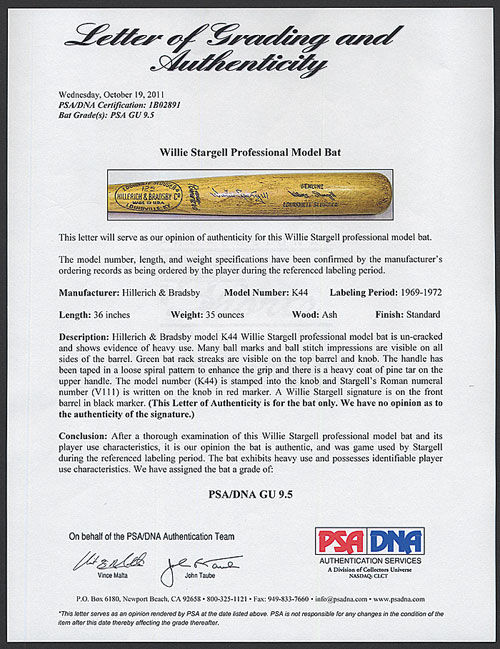 Willie Stargell H&B signature-model "K44" bat dating from the 1969-1972 manufacturing period. Graded GU 9.5 by PSA/DNA. The bat displays heavy use along its entire length, including numerous ball marks and stitch marks on all sides of the barrel, green bat-rack marks, and a heavy application of pine tar on the upper handle. A seven-inch long wrap of vintage white tape, applied in a loose spiral manner, appears on the handle. Stargell's uniform number has been written in roman numerals ("VIII") on the knob in red marker. Stargell has signed the bat in black marker (grading "10') on the "sweet spot" of the barrel. The four-year period 1969-1972 witnessed Willie Stargell emerge as one of the game's top sluggers. "Pops" averaged 35 home runs a year during that span, including both a league-leading and career-high 48 home runs in 1971. Not coincidentally, the Pirates won the Eastern Division in three of those four seasons, with the 1971 club winning its first World Championship since 1960. Stargell retired after the 1982 season with 475 home runs, 1,540 RBI, and a .282 lifetime average. He was elected to the Hall of Fame in 1988, his first year of eligibility. This is undoubtedly the finest Willie Stargell bat we have ever offered. The fact that it dates from the most prolific four-year period of his career and also corresponds to the Pirates' early 1970s era of dominance only adds to its desirability. It would be hard to imagine a finer example. This is an ideal and simply extraordinary Willie Stargell bat in all respects. Length: 36 inches. Weight: 35 ounces. LOAs from John Taube and Vince Malta of PSA/DNA and James Spence/JSA. Reserve $500. Estimate $2,000+. SOLD FOR $5,036