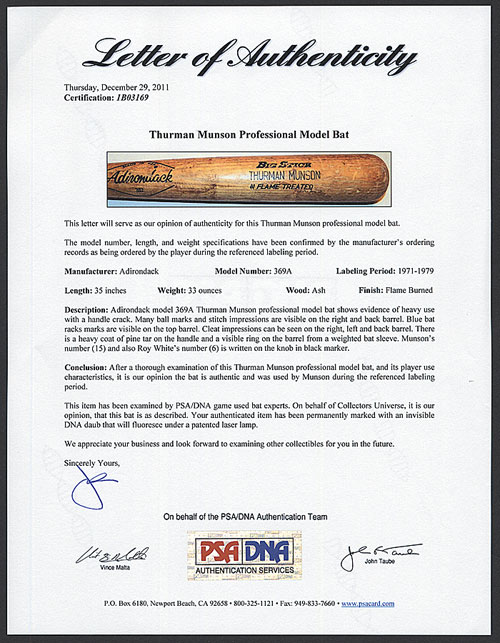 Thurman Munson Adirondack block-letter (full name) model "369A" bat dating from the 1971-1979 manufacturing period. The bat displays evidence of heavy use along its entire length, including numerous ball and stitch marks on both the back and right barrel, blue rack marks, cleat marks, and a visible ring on the barrel resulting from the use of a weighted bat sleeve. A copious amount of pine tar has been applied along the handle, which also displays a large fifteen-inch multiple crack. Munson's uniform number ("15") has been written on the knob in black marker, as has the number "6," indicating the bat's possible use by Munson and another player (Roy White wore number 6 with the Yankees from 1971 to 1979). Despite that minor anomaly, John Taube concludes his LOA by stating "After a thorough examination of this Thurman Munson professional model bat, and its player use characteristics, it is our opinion the bat is authentic and was used by Munson during the referenced labeling period." Munson pro-model bats, like those of Roger Maris, are more desirable than those of many Hall of Fame players and the demand far outweighs the limited supply today. Munson's tragic death in 1979 remains one of the darkest days in Yankees history and, not surprisingly, signaled the downfall of the team's 1970s dynasty. Today, Munson's number "15" has been retired along with those of Ruth, Gehrig, DiMaggio, and Mantle, and his plaque hangs proudly alongside other Yankee immortals in Monument Park at Yankee Stadium. In deference to his memory, Munson's locker remains empty in the Yankee clubhouse; a silent tribute to one of the greatest players in team history. Length: 35 inches. Weight: 33 ounces. LOA from John Taube and Vince Malta of PSA/DNA. Reserve $500. Estimate $1,500+. SOLD FOR $3,259