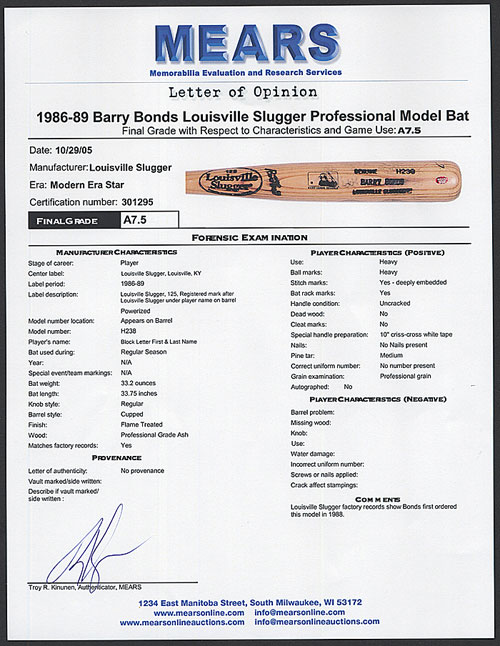 This Barry Bonds Louisville Slugger block-letter (full name) model "H238" bat dates to the 1986-1989 manufacturing period; however, H&B shipping records indicate that Bonds first ordered this model bat in 1988, thereby more narrowly dating it to the two-year span 1988-1989. The bat, which features exceptionally deep barrel stampings, displays heavy use along its entire length, including numerous ball marks, deeply embedded stitch marks, rack marks, pine tar, and a ten-inch length of white tape applied in a "crisscross" fashion on the handle. This is an extremely early Barry Bonds game bat, dating to just his third season in the majors as a member of the Pittsburgh Pirates. Bonds posted decent home-run numbers in 1988 (24) and 1989 (19), but it would be a few more years before he emerged as one of the game's greatest sluggers. Although Bonds is best remembered for his single-season and career home-run records, he was also a seven-time MVP (a Major League record) and nine-time Gold Glove Award recipient. Today he ranks among the top ten all-time in numerous offensive categories, including on-base percentage (.4443), slugging percentage (.6069), games played (2,986), runs scored (2,227), total bases (5,976), RBI (1,996), and bases on balls (2,558). Length: 33.75 inches. Weight: 33.2 ounces. Graded A7.5 by MEARS (base grade of 5, plus 2.5 points for use). Almost all Bonds bats in collectors' hands date from late in his career. This is an outstanding Barry Bonds pro-model dating from his earliest days with the Pittsburgh Pirates. LOA from Troy Kinunen/MEARS. Reserve $200. Estimate $400/$600. SOLD FOR $711