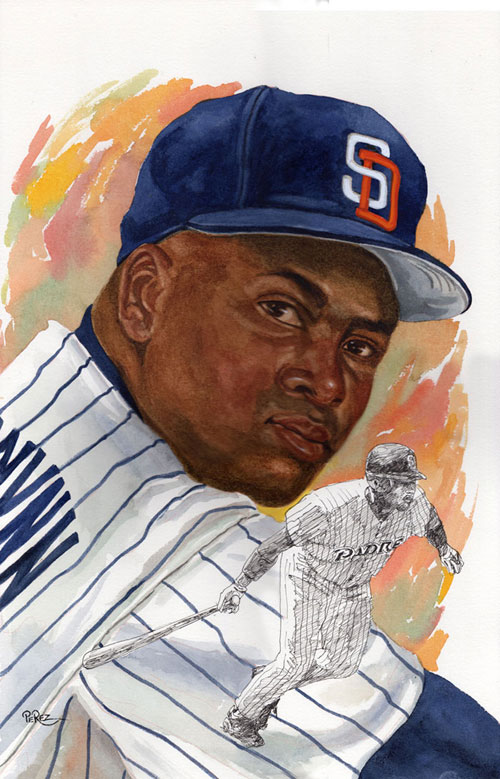 Offered here is the post Perez-Steele Hall of Fame postcard artwork of Tony Gwynn, who was inducted in 2007. Every year legendary artist Dick Perez would create the official portraits of the newly elected Hall of Famers which, in the past, would then be published in the form of a Perez-Steele Hall of Fame postcard. This special artwork was first published by Dick Perez in his 2010 book The Immortals: An Art Collection of Baseball's Best (see introduction for more information). This painting has not yet been published as a postcard because Tony Gwynn was elected to the Hall after Perez-Steele Galleries' last series update in 2001. Though Perez-Steele Galleries is no longer publishing, if the Hall of Fame postcard series is updated in the future, this is the image of Gwynn that will be used. Signed by Dick Perez in the lower left. 10.25 x 14 inches. Watercolor on 100% cotton fiber arches WC paper. Mint condition. A copy of The Immortals accompanies the original painting. Reserve $300. Estimate (open). SOLD FOR $593