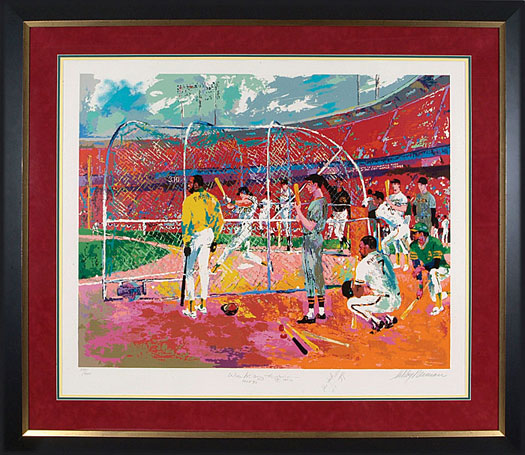 Titled Bay Area Baseball , issued in 1990, serigraph numbered "399/450," signed by Neiman in pencil in the lower right (grading "10"). Also signed in pencil (grading "10") along the base by Willie Mays, Reggie Jackson, and Willie McCovey, each of whom has also added the year of his Hall of Fame induction next to his name. It should be noted that this serigraph was not originally issued signed by those three respective players. Our consignor invested considerable time and money in acquiring all three signatures personally. Not surprising, his greatest challenge was in acquiring the Mays signature. As he recounts, getting Mays to agree to sign the piece turned out to be just half the battle. Apparently, Mays' eyesight is not what it used to be and more than once our consignor had to stop Mays as he attempted to sign the piece not along the bottom border, but on the artwork itself. Luckily, all turned out well and this piece represents the only signed example of this particular serigraph we have ever seen. Edition limited to 536 total impressions (450 numbered impressions, 80 artist's proofs, and 6 printer's proofs). The colorful artwork pays homage to the many baseball stars who have played in the San Francisco/Oakland Bay Area over the years. Among the players prominently depicted here standing around the batting cage are Joe DiMaggio, Willie Mays, Reggie Jackson, Willie McCovey, Dave Parker, Mark McGwire, Jose Canseco, Kevin Mitchell, and Lefty O'Doul. Fascinating subject matter for LeRoy Neiman, whose sports-related artworks usually feature a single modern subject and rarely capture a history-inspired concept, and only the third example of this serigraph we have ever presented. The serigraph measures 35.75 x 28 inches (image area) and has been matted and framed to total dimensions of 51 x 44.5 inches. In apparent Near Mint condition. The substantial size/weight of this item requires that there will be a shipping charge for this lot (which will vary depending upon where it is being shipped). The shipping charge will be billed separately from the auction invoice. LOA from James Spence/JSA. Reserve $200. Estimate $400/$800. SOLD FOR $1,067