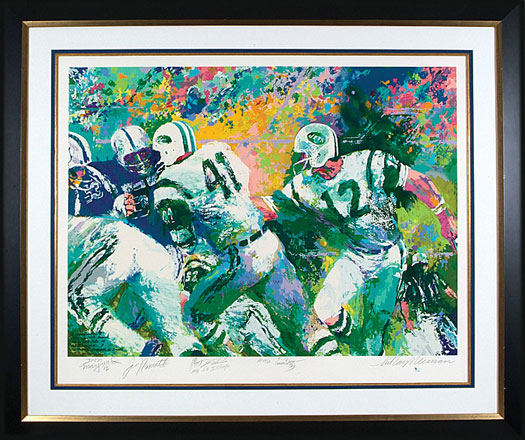 Titled Handoff - Super Bowl III , issued in 2007, serigraph numbered "AP 47/69" (Artist's Proof), flawlessly signed in pencil (all grading "10") in the lower margin by artist LeRoy Neiman and the following members of the 1969 Jets: Joe Namath, Matt Snell, Emerson Boozer, and Don Maynard. Edition limited to 427 total impressions (350 numbered impressions, 69 artist's proofs, and 8 printer's proofs). This spectacular artwork captures the action in Super Bowl III, in which Joe Namath and the Jets upset the heavily favored Baltimore Colts by a score of 16-7. "Broadway Joe" is pictured prominently in the piece as he hands off to fullback Matt Snell for the Jets' first score of the day. This piece holds a special place in Neiman's heart, as he was an artist-in-residence with the Jets during the historic 1969 season and later attended Super Bowl III. "I remember everything about that game," Neiman later recalled, "the breathing, the profanity, the sweat, the clashing of the leather!" This work was created based upon Neiman's original sketches from the game. The serigraph was originally issued with just the signatures of Namath and Neiman. The signatures of Snell, Maynard, and Boozer were added at a later date, making this an extremely rare signed example of this important work. This is one of the most expressive football pieces ever created by Neiman and one that is destined to become a modern classic. The serigraph measures 37.25 x 27.75 inches and has been handsomely matted and framed to total dimensions of 50.5 x 43 inches. In apparent Near Mint condition. The substantial size/weight of this item requires that there will be a shipping charge for this lot (which will vary depending upon where it is being shipped). The shipping charge will be billed separately from the auction invoice. LOA from James Spence/JSA. Reserve $500. Estimate $1,000/$1,500. SOLD FOR $2,666