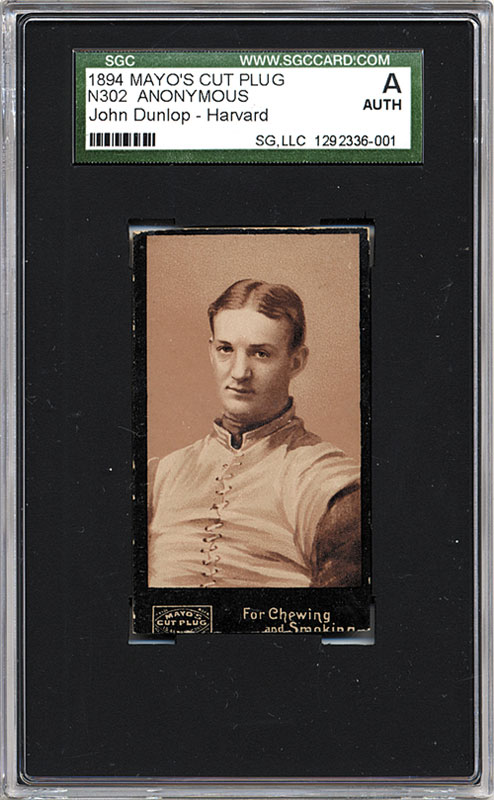 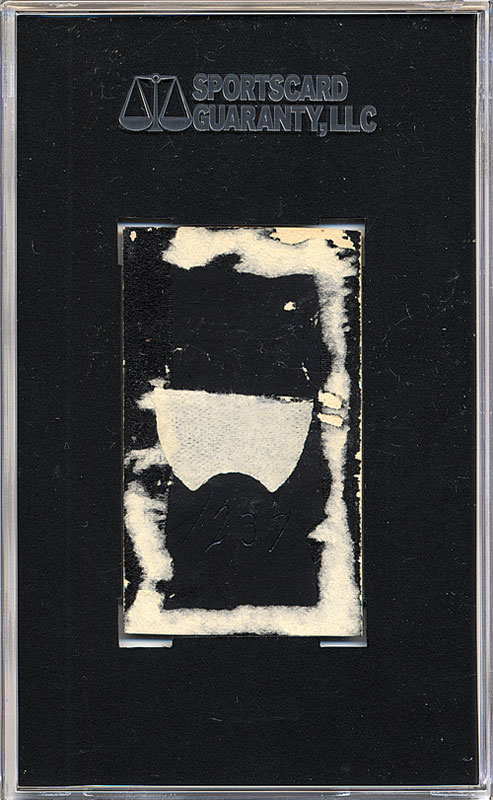 Presented is an extraordinary newly discovered example of one of the most sought after of all football card rarities: the "Anonymous" player card from the highly desirable N302 Mayo's football series. This card was just recently found by a Michigan family that was cleaning out an old farmhouse. In the farmhouse was an old scrapbook, and neatly mounted on the inside pages of the scrapbook was this extraordinary example of "The Holy Grail" of football cards! The card has been protected for decades from all elements, perfectly preserved within the confines of the scrapbook. This explains how this card happened to have survived in such remarkable condition. In terms of image, crispness, and overall visual appearance, "The Farmhouse" Anonymous discovery card is by far the finest example ever seen. Aside from the top and bottom being slightly trimmed (which though unfortunate, with reference to grading, does not significantly detract from visual appeal), the front of the card has an Ex-Mt appearance. It is bright and crisp, with a flawless image, and absolutely no creases. The reverse has paper remnants from being removed from the album and the number "1237" written in ink (very faint against the black background of the reverse). To the best of our knowledge, and after checking with numerous football-card specialists, in terms of overall eye-appeal, this is by far the finest example of the few known Dunlop cards to exist in the hobby. N302 Mayo's Cut Plugs are universally recognized as one of the rarest and most important of all football-card sets. They are the very first football-card set and the only nineteenth-century card issue devoted exclusively to football. The set features Ivy League college football players of the day. The "Anonymous" player card is one of the three key cards to the set (along with Hinkey and Poe). The card displays Harvard football legend John Dunlop in a portrait pose. Significantly, neither Dunlopâ€™s name nor a team name appears on this extremely rare card, which is the only N302 example without a player or team designation. Dunlop was a star at Harvard, winning four varsity letters, and later became an assistant coach, which adds to the mystery as to why such a well-known individual would be unnamed in the set. Mayo's Cut Plug Football cards, like their baseball counterparts that are identical in design, are very susceptible to corner and edge wear due to their easily chipped black borders. This is an exceptional example of this extreme rarity, with very little wear to the condition-sensitive edges and corners. When it comes to prewar football-card collecting, N302 Mayo's Cut Plugs will always be recognized as one of the few most significant sets, and the N302 "Anonymous" player card will always remain one of football-card collecting's key rarities. "The Farmhouse" example may always be the most stunning and attractive example of this important football card. Encapsulated as Authentic by SGC. Reserve $1,000. Estimate (open). SOLD FOR $11,258