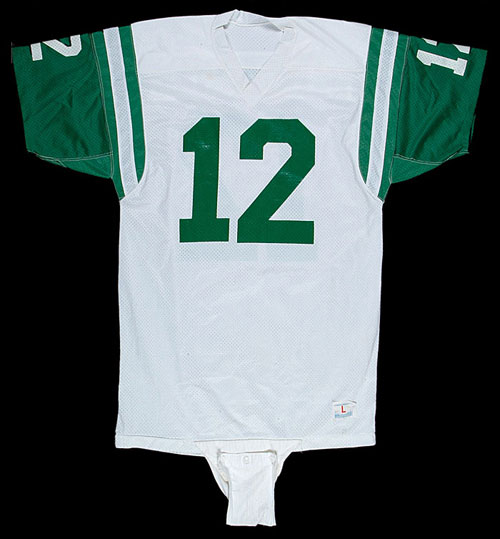 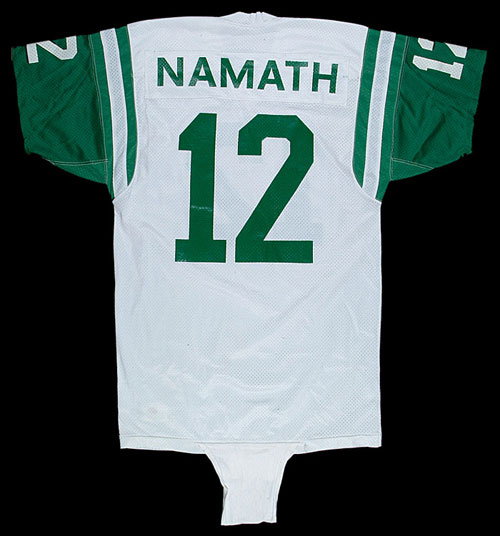 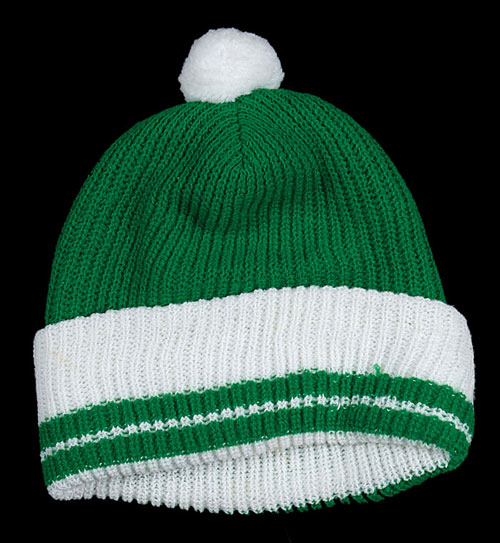 New York Jets road jersey worn by Hall of Fame quarterback Joe Namath during the early 1970s. Graded A9 by MEARS. The white mesh jersey, with green sleeves, features the number "12" on the front, reverse, and each sleeve. "Namath" is lettered upon a white-mesh nameplate on the reverse, directly above the number. All front and reverse numerals, and the name, have been silkscreened in green, while both sleeve numbers have been silk-screened in white. A "Champion" label, bearing the size designation "L" (Large) appears on the left front tail. Despite the lack of an "extra length" designation on the label, the jersey does display an additional three to four inches of extra length. A custom six-button cotton crotch piece has been added to the base of the jersey. The jersey is original and unaltered, displaying light wear. Accompanying the jersey is a green-and-white beanie, the style of which was normally worn by Namath on the sidelines during his career. It should be noted that the jersey and beanie were originally acquired together. This jersey has both a prior auction history and a special provenance. It was introduced to the hobby as Lot 19205 in Heritage's 2005 October Signature Auction #703, where it realized a final sales price of $17,925. At the time of its initial sale, Heritage stated that both the jersey and beanie "were given to the wife of a famous uniform collector by a Jets staffer at Shea Stadium in the early 1970s." While Heritage chose not to name the collector at the time of the sale, on the MEARS letter, which was issued on 11/1/2005, the "collector" is identified as Duke Hott. One of the hobby's legendary pioneers, Duke Hott assembled what was arguably the finest football memorabilia collection ever seen. Consisting of countless jerseys, game-used equipment, and every manner of memorabilia imaginable, the Duke Hott Collection was a paragon within its field, and one that will probably never be replicated. Nearly all of Hott's football collection was sold at public auction many years ago; however, those pieces that carry its pedigree, such as this example, are all the more highly prized by collectors today. It must be noted that the original MEARS LOA that once accompanied the jersey has been lost by our consignor; however, the MEARS hologram label, bearing the certificate number "301076" remains firmly affixed to the inside of the garment. Despite the loss of the issued MEARS letter, it can still be accessed and verified on the MEARS website by means of the certificate number. When Heritage sold the jersey in October 2005 it dated it to the two-year period 1971-1972, but the MEARS dating is broader, spanning the years 1972-1976. Regardless of its exact year of issue, this remains an outstanding Joe Namath mesh jersey dating from the early 1970s, with the added provenance of having once resided in the fabled Duke Hott Collection. Reserve $2,500. Estimate $10,000++. SOLD FOR $8,888