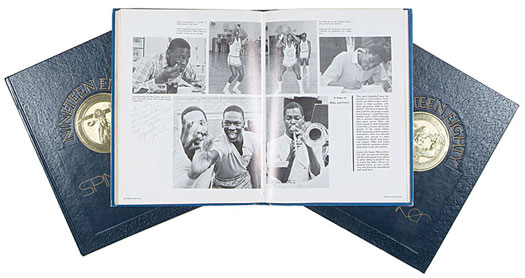 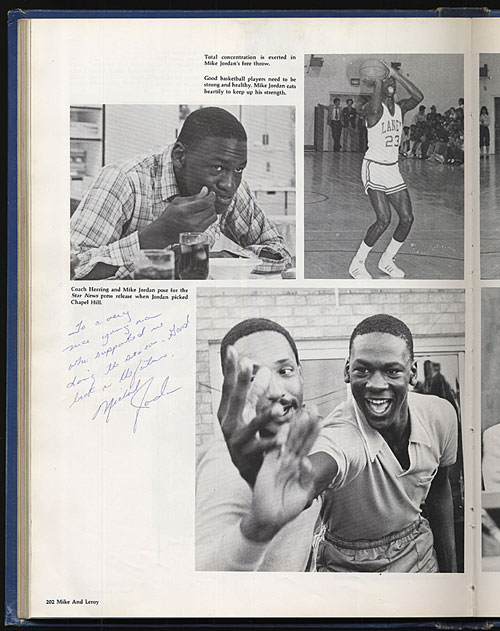 Two Laney High School (Wilmington, North Carolina) Spinnaker yearbooks, dating from 1980 and 1981, respectively, that correspond to Michael Jordan's junior, and senior years at the school. Ideally, both books have been inscribed by Jordan to one of his classmates. Also accompanying the two signed yearbooks is a second junior yearbook that is not signed, for a total of three yearbooks. 1) Jordan has inscribed the junior yearbook in blue ink (grading "10') on page 167, located just to the right of an action photo of him dunking a basketball: "To a very nice young lady who meant a lot to me. See you in the future. Love Michael Jordan." The name of the original owner of the book, "Gwen Dolyn Taylor," is written in ink on the interior front cover (Taylor was a member of Jordan's junior class). 2) The senior yearbook is inscribed in blue ink (grading "10") on page 202, just to the left of a photo of Jordan and his high-school coach posing together: "To a very nice young man who supported me during the season. Good luck in the future. Michael Jordan." This yearbook originally belonged to one of Jordan's classmates named "Joey." Both yearbooks picture Jordan more than once, including his respective class portrait, and each features inscriptions by numerous other classmates. 3) As noted, also included is a second 1980 junior yearbook that has not been signed by Jordan. All of the yearbooks display moderate handling wear and are in Excellent condition overall. Celebrity high-school yearbooks have become an extremely popular area of collecting in recent years, and these may be the most desirable examples from the world of basketball. Total: 3 yearbooks (senior yearbook signed by Michael Jordan, and two junior yearbooks, one of which is singed by Michael Jordan). LOA from James Spence/JSA. Reserve $500. Estimate $2,000+.
SOLD FOR $2,370