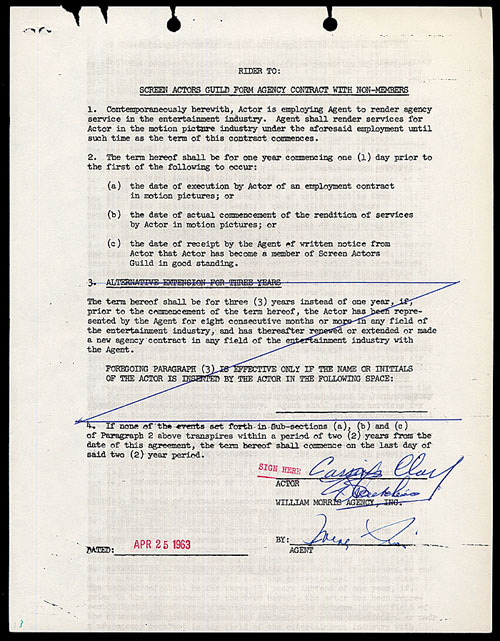 One-page document, dated April 25, 1963, signed by Cassius Clay. The document, which is a rider to "Screen Actors Guild Form Agency Contract With Non-Members," has been signed by Clay in blue ink along the bottom (grading "10"). The signature of a William Morris Agency representative overlaps the last three letters in "Cassius." Clay was an up-and-coming contender for Sonny Liston's heavyweight boxing title at the time this contract was signed, but he had not yet converted to Islam and changed his name to Muhammad Ali. One month earlier Clay defeated Doug Jones in what was later named the "Fight of the Year" and his brash style had already made him a celebrity. In this document, which is a rider to a Screen Actors Guild contract, Ali (referred to here as "Actor") is formally "employing Agent to render agency services in the entertainment industry." While Clay never seriously pursued an acting career he did make a cameo appearance as himself in the 1962 film Requiem for a Heavyweight . He also later appeared on both The Jack Paar Show (November) and The Jerry Lewis Show (December) in 1963. Cassius Clay signed items have always been highly prized by collectors because of their rarity and significance to Ali's life story. This is an exceptional example relating to his early foray in the entertainment industry. The document (8.5 x 11 inches) displays two punch holes (each torn) along the top, a few small edge tears, and staple holes in the upper left; otherwise it is in Excellent condition. LOA from James Spence/JSA. Reserve $1,000. Estimate $2,000/$4,000+. SOLD FOR $4,148