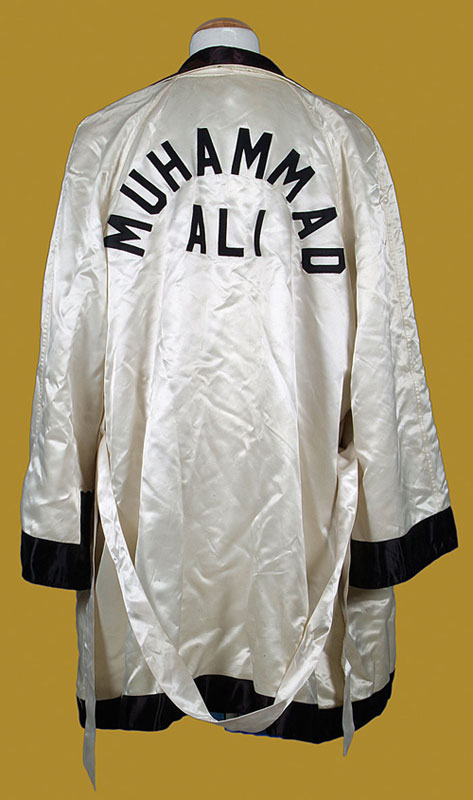 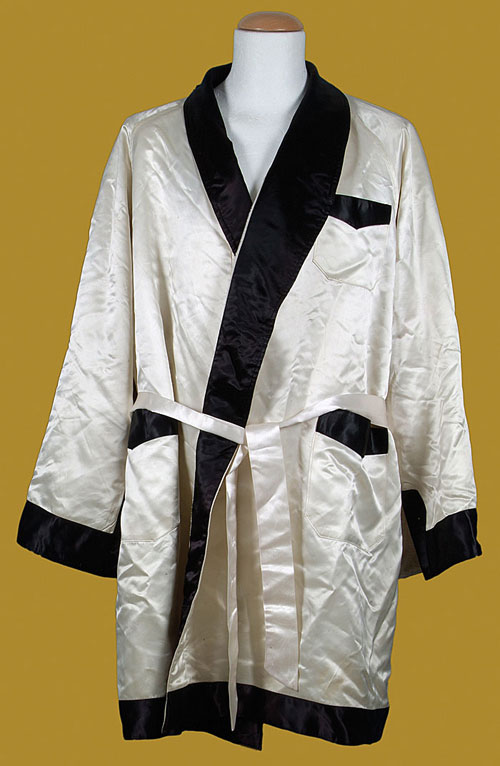 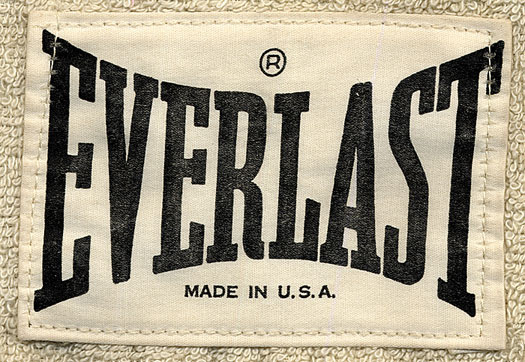 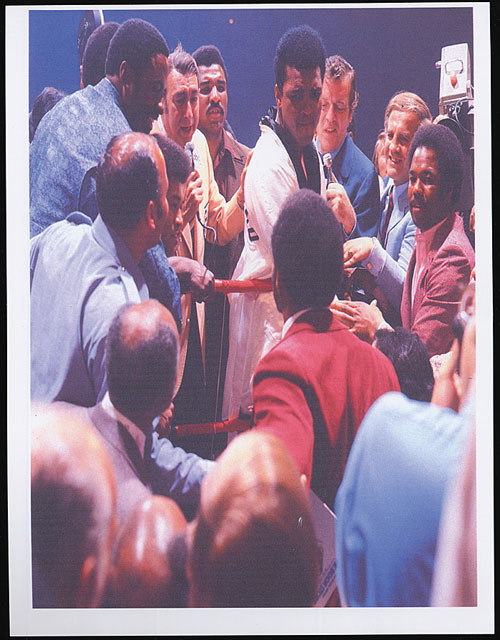 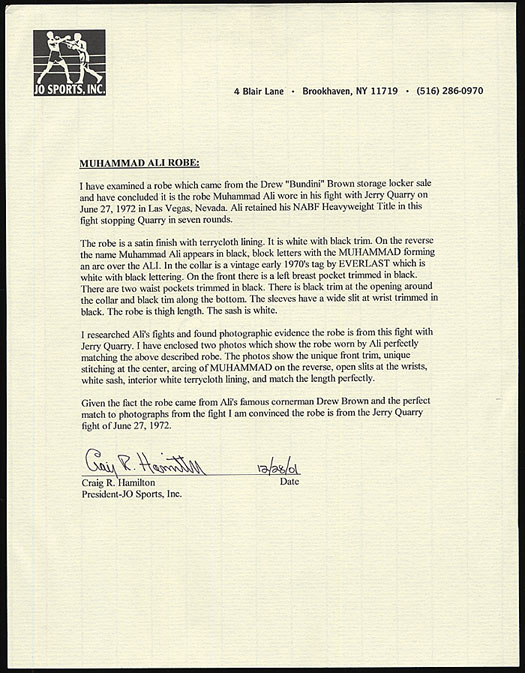 White satin robe worn by Muhammad Ali for his 1972 NABF Heavyweight Title bout against Jerry Quarry on June 27, 1972, in Las Vegas, Nevada. This robe originates from the collection of Ali's legendary assistant trainer/cornerman Drew "Bundini" Brown, who is the source for nearly all of the most important Ali memorabilia in the hobby today. Equally important, the robe is accompanied by an LOA from noted boxing expert Craig Hamilton, who has photo matched the robe to the 1972 Quarry title bout. In full:

I have examined a robe which came from the Drew "Bundini" Brown storage locker sale and have concluded it is the robe Muhammad Ali wore in his fight with Jerry Quarry on June 27, 1972 in Las Vegas, Nevada. Ali retained his NABF Heavyweight Title in this fight stopping Quarry in seven rounds. The robe is a satin finish with terry cloth lining. It is white with black trim. On the reverse the name Muhammad Ali appears in black, block letters with the MUHAMMAD forming an arc over the ALI. In the collar is a vintage early 1970s tag by EVERLAST which is white with black lettering. On the front there is a left breast pocket trimmed in black. There are two waist pockets trimmed in black. There is black trim at the opening around the collar and black trim along the bottom. The sleeves have a wide slit at wrist trimmed in black. The robe is thigh length. The sash is white. I researched Ali's fights and found photographic evidence the robe is from this fight with Jerry Quarry. I have enclosed two photos which show the robe worn by Ali perfectly matching the above described robe. The photos show the unique front trim, unique stitching at the center, arcing of MUHAMMAD on the reverse, open slits at the wrists, white sash, interior white terrycloth lining, and match the length perfectly. Given the fact that the robe came from Ali's famous cornerman Drew Brown and the perfect match to the photographs from the fight I am convinced the robe is from the Jerry Quarry fight of June 27, 1972.

The robe, which is original and unaltered, displays moderate wear, including a few small, light scattered stains throughout. This bout marked Ali's second title fight against Jerry Quarry, a perennial heavyweight contender during the late 1960s and early 1970s. Ali posted a technical knockout in round three of their first bout, held in Atlanta, Georgia, on October 26, 1970. Unfortunately for Quarry, this second bout, while lasting a little bit longer, ended in the same manner, as Ali battered him for seven rounds before the fight was finally stopped by the referee. Ali fight-worn robes, especially those that can be photo matched, are rare and highly prized by collectors. The fact that offered example also comes with the provenance of originating from Drew "Bundini" Browns personal storage unit only adds to its appeal. This is an extraordinary, well-documented Ali Fight robe dating to the peak of his career, and one that would be the highlight of even the most advanced Ali collections. LOA from Craig Hamilton. Reserve $5,000. Estimate $10,000++.
SOLD FOR $29,625