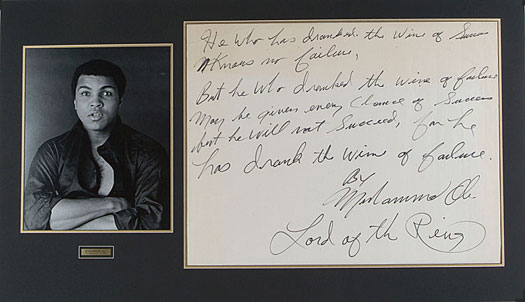 Enormous handwritten passage signed by Muhammad Ali in black marker in which he discusses success. The text comprises an area of 32 x 25 inches, while the signature measures sixteen inches in length! Remarkable for display, as intended by Muhammad Ali, this is one of a small number of large handwritten sheets produced by Ali in 1977 for an unspecified promotional project that never came to fruition (see introduction for the complete history of this piece). In full: "He who has dranked the Wine of Success knows no failure, But he who dranked the wine of failure may be given every chance of Success but he will not succeed, for he has drank the wine of failure - by Muhammad Ali - Lord of the Ring." Both the text and signature are boldly scripted, grading "9/10." The sheet displays minor toning, as well as a few minor creases throughout. Vg-Ex. Professionally matted together with a black-and-white photograph (16 x 20 inches; Mint condition) of Ali taken by John Stewart (produced from the original negative) to total dimensions of 55 x 32.5 inches. LOA from James Spence/JSA. Reserve $1,000. Estimate (open).
SOLD FOR $1,778