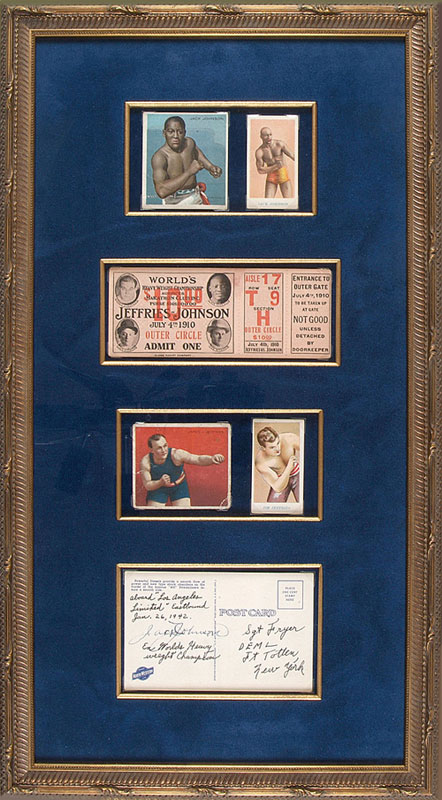 Exceedingly rare full ticket to the historic World's Heavyweight Championship bout between Jack Johnson and Jim Jeffries held in Reno, Nevada, on July 4, 1910. The 1910 bout between Jack Johnson, the champion, and Jim Jeffries, the challenger and former heavyweight champion, was one of the most important boxing matches in history because of its social and political implications. Johnson was a black man, and when he defeated Tommy Burns for the World Heavyweight Championship in 1908 it set off a firestorm of indignation among the white masses, who bristled at the notion of someone other than a white man holding the title. When Jack London publicly called for a "Great White Hope" to take back the title, a number of white fighters valiantly tried, but failed, to restore the "white man's honor." Finally, in desperation, the call went out to Jeffries, the former champion who had retired six years earlier. Ironically, Jeffries had refused to fight Johnson years earlier precisely because he was black. This time, however, he was swayed by public opinion to take on the mantle of the "Great White Hope." When announcing his return to the ring, he stated, "I feel obligated to the sporting public at least to make an effort to reclaim the heavyweight championship for the white race. . . I should step into the ring again and demonstrate that a white man is king of them all." While that played well with the press, he was more likely (or at least additionally) motivated by a guaranteed $100,000 purse, a $10,000 bonus and the subsequent movie rights. Billed as the "Fight of the Century," the two finally met on July 4, 1910, in Reno, Nevada. Unfortunately, the many who attended hoping to see Johnson finally defeated were greatly disappointed. Johnson toyed with Jeffries for most of the match, unmercifully pounding him round after round until finally, after three brutal knockdowns in the fifteenth round, Jeffries' corner men entered the ring and stopped the fight. The "Great White Hope" had been defeated and another small step in the battle for racial equality had been achieved.

This is only the third example of a full ticket from this fight we have ever seen and the first we have ever handled. The ticket (6.5 x 2.75 inches), which features portrait images of both fighters (as well as the two promoters), has a small stain along the upper border that touches upon Johnson's image, a tiny edge tear on the left border, and light corner wear. In Very Good to Excellent condition overall. The ticket has been attractively mounted (by means of photo corners) and framed together with a number of other complementary items to create an extremely striking display. The remaining items are comprised of the following: 1) a Jack Johnson signed postcard (blue fountain pen; grading "9/10") with additional text (not in Johnson's hand) that reads "aboard "Los Angeles/Limited" Eastbound/Jan. 26, 1942/ Ex Worlds Heavy/weight champion." The postcard has not been mailed and is in Excellent condition. 2) Jack Johnson T218 Mecca trade card (Vg). 3) Jack Johnson E75 trade card (Ex). 4) Jim Jeffries T218 Mecca trade card (Gd). 5) Jim Jeffries E75 trade card (Vg-Ex). Total dimensions: 13 x 23.5 inches. LOA from James Spence/JSA. Reserve $500. Estimate $2,000+. SOLD FOR $2,963