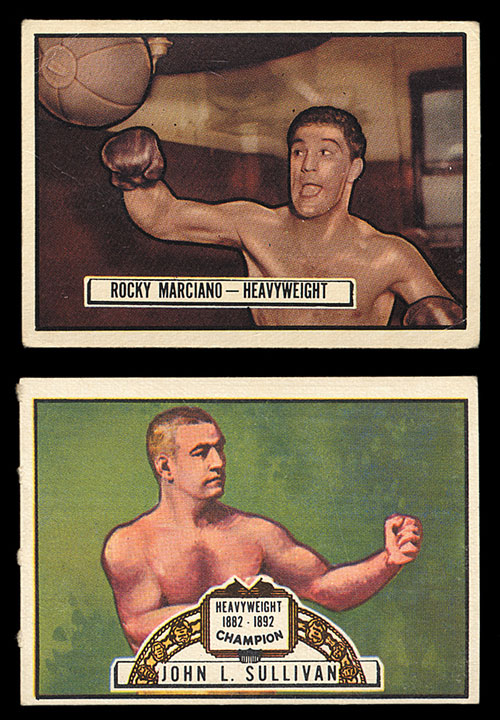 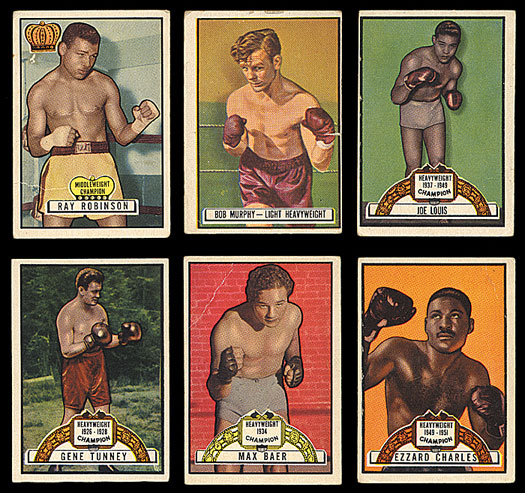 Complete set of Topps Ringside. 40% Vg-Ex to Ex (with a few Ex-Mt), and 60% Gd to Vg (with a few slightly lesser). Keys: #1 Lesnevitch (Vg), 11 Baer (Gd-Vg), 32 Marciano (Vg), 43 Robinson (Fr), 49 Murphy (SP, Gd-Vg), 69 Sullivan (Ex), 88 Louis (Vg), 95 Tunney (slight trim), and 96 Charles (Gd-Vg). Topps' first attempt at boxing cards was in 1951 with the 96-card Ringside boxing series. The exceptional artwork and the inclusion of boxing greats from all eras has always made this set one of boxing-card collecting's premier issues. Topps apparently found much greater success with baseball and football. This is confirmed both by the relative scarcity of "Ringside" cards, and the fact that this was the only Topps boxing set ever issued. The production quality of this issue, however, is equal or superior to that of all early 1950s bubble-gum cards issued by Topps or Bowman. This is a very attractive complete set of this classic 1950s Topps issue, bright and fresh, with an overall appearance far superior to the technically accurate assigned grades. The set is accompanied by a two-card uncut panel (Ex-Mt) featuring cards #43 Ray Robinson and #26 Miceli. Total: 96 cards plus two-card panel. Reserve $300. Estimate $500+. SOLD FOR $948