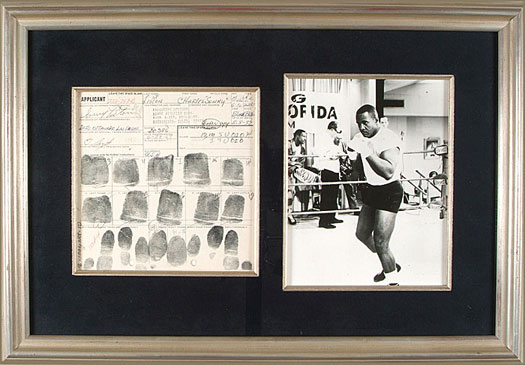 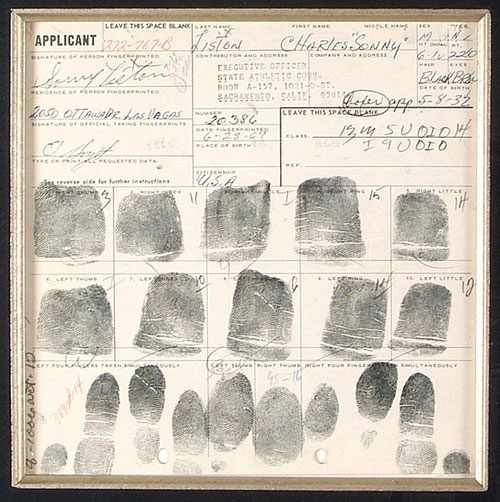 Boxing application card, filed with the California State Athletic Commission in 1967, signed by former heavyweight boxing champion Sonny Liston (1932?-1970). Following Liston's two defeats to Muhammad Ali, in 1964 and 1965, respectively, the former champion took nearly two years off from the ring before embarking on a comeback in 1966. His first four bouts, which took place between January 7, 1966, and April 28, 1967, were all held in Sweden. With four victories under his belt, Liston wanted to return to the United States, but he first had to apply for a boxing license in each state that he wished to fight in. Offered here is Liston's application card for a boxing license filed with the California State Athletic Commission on June 28, 1967. The application card has been signed by "Sonny Liston" in black ink (grading "10"), and lists his home address as "2050 Ottawa Dr. Las Vegas." His birth date, which has always been in question, is recorded here as "5-8-32." In addition to listing his physical measurements (height, weight, etc.), Liston was also required to provide fingerprints from each hand, which he has done. In accordance with the standard application procedure, the California State Athletic Commission received a report, dated July 17, 1967, from the Federal Bureau of Investigation listing all of Liston's prior arrests and criminal convictions (a copy of which accompanies the application card). Obviously, Liston eventually obtained his license from the state, because he defeated Billy Joiner on May 23, 1968, in Los Angeles and then won a nationally televised bout against Henry Clark on July 6, 1968 in San Francisco. Liston continued to fight right up to the time of his death in 1970, losing only once during his comeback attempt. He finished his career with a lifetime record of 50-4. The card (8 x 8 inches) displays two notebook holes along the bottom border, as well as normal handling wear. In Excellent condition overall. Matted and framed together with a recent print of Liston to total dimensions of 23 x 16 inches. LOA from James Spence/JSA. Reserve $300. Estimate $500/$1,000. SOLD FOR $4,148